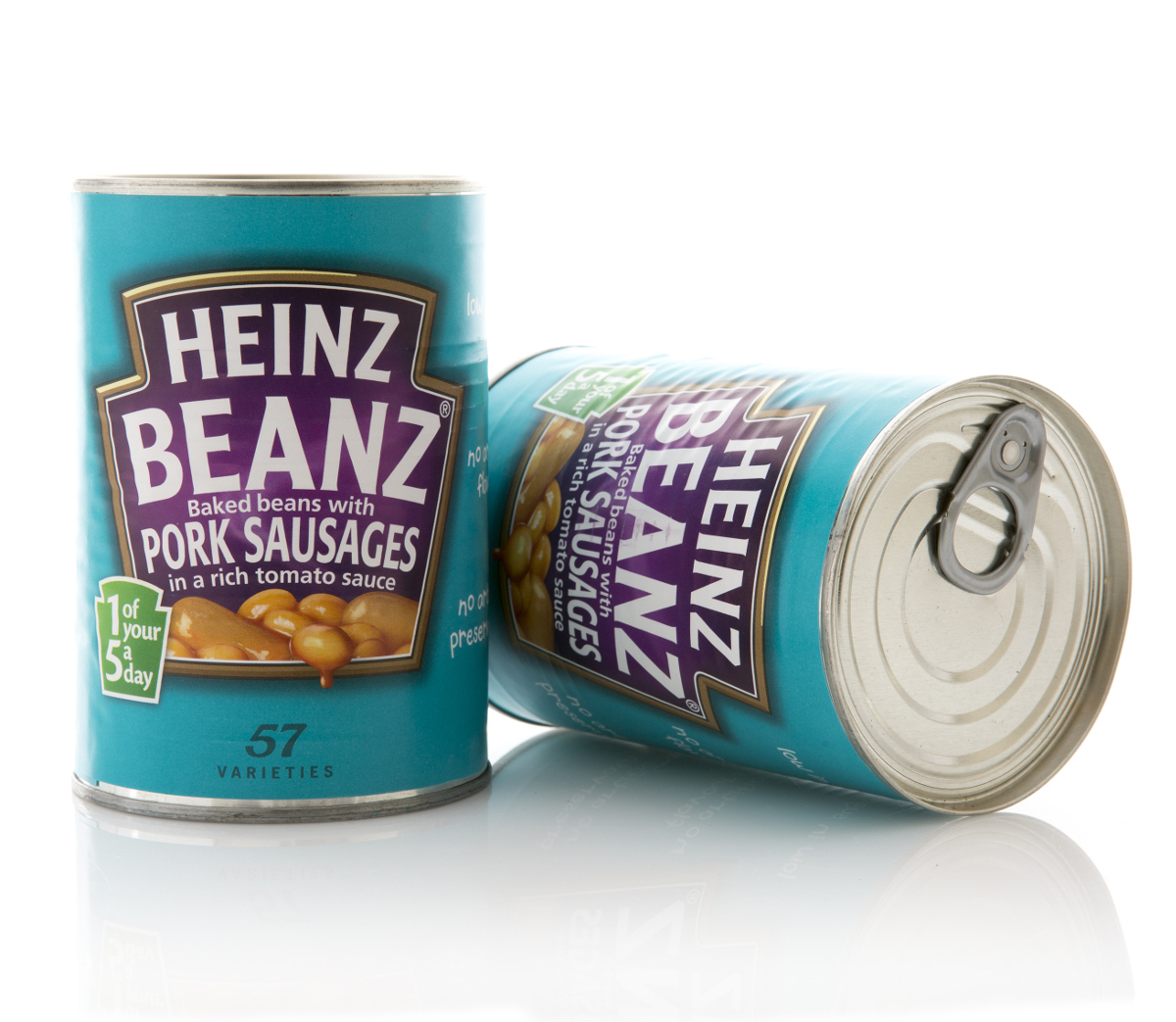 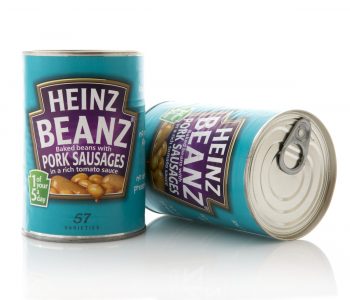 Due to the incredible track record of Buffett Warren, many investors look to see what stocks are held by his investment company, Berkshire Hathaway Inc. (NYSE:BRK.A, NYSE:BRK.B). The belief is that if Buffett owns the company, he must be bullish, or at least see bullish signs within the company that are being ignored by the markets.

Throughout Buffett’s investing strategy, he has stayed true to assessing companies which have recurring revenue, prices that are resistant to change, a large market share of the sector, and strong leadership. The most important takeaway from Buffett when he owns a company is when he wants to own it forever.

In 2017, the top holding for Berkshire Hathaway was Kraft Heinz Co (NASDAQ:KHC). Before buying into the company, Buffett took a look at all the factors mentioned above. Since Buffett plans to hold the investment forever, today’s article will detail why Kraft Heinz is a perfect Warren Buffett stock. But before getting into the business details of KHC stock, let’s take a trip down memory lane and see how Buffett acquired the shares.

In 2013, as he had several times before, Warren Buffett formed a partnership with 3G Capital Partners LP, an American and Brazilian investment firm, to purchase The H.J. Heinz Company. At the time, Heinz was primarily considered a food utility company due to its condiment products. It also had a large market share and some great businesspersons at the top of its corporate structure.

The idea behind the purchase was to improve the company’s margins by reducing operating costs. And since there would be no impact to the top line revenue, there would be continued growth. After some time, Buffett and 3G Capital took another step to make the company even more efficient–and larger.

In 2015, 3G and Buffett’s Berkshire partnered once again, this time for an investment in Kraft Foods. However, it was not a straight-up buyout, but rather a merger with Heinz.

Prior to the merger’s completion in July 2015, there was already some overlap when it came to the business’ operations and products. That said, combining the two was primarily a strategic move to bring both companies together and reduce overall costs. The merger brought a reduction in the number of worldwide manufacturing plants, as well as the total number of employees. However, this strategy will still take several years to pan out, since time is still needed to plan a successful business model.

After the purchase and merger of the two companies, 3G became the largest shareholder of the combined entity, whereas Berkshire was the second-largest. That said, KHC stock is the largest holding in Berkshire’s entire investment portfolio based on the total amount of capital invested.

Why Kraft Heinz Is a Perfect Warren Buffett Stock?

Following the deal’s closing, Buffett has always had a choice of selling off the shares and moving on to another investment opportunity. However, Buffett believed in the plan from the get go, from the buyout of Heinz to the merger of the two companies.

There are a few reasons why Buffett is holding on to the shares to this day. First, since the plan is to reduce cost, the business’ margins should rise over time, leaving more funds available for the business and, if it so chooses, shareholders. This also boosts the company’s growth in terms of market size; as of this writing, Kraft Heinz is ranked as the third-largest North American food and beverage company. And improving margins mean it is possible to one day take the top spot.

Another reason why Buffett loves KHC stock is because of the “price stickiness” of its products, which include condiments (ketchup, mustard, etc.), coffee, dairy products, and meats. Since these types of items are always needed, the state of the economy has no to minimal influence on sales. And since Kraft Heinz’s products are very affordable, consumers keep buying them.

What’s more, Kraft Heinz’s revenue and margins are protected from inflation, which is a huge positive. As the cost of producing its products increases, those additional costs get passed off onto the people buying them. This helps top-line revenue grow as well.

The last reason why Buffett continues to hold KHC stock is because of the return on capital he and other shareholders receive as a dividend. The dividend indicates that the company generates plenty of revenue and any future business decisions will take into account the cash flow earned to ensure that the dividend’s payout continues.

Even though the company became a single entity in 2015, there has been a pattern occurring through the dividend.

The very first dividend was paid out in July 2015 for $0.55 per share. This was the first and only payment at this amount, increasing by $0.025 per share to $0.0575 three months later. There were two dividend hikes that took place in that first year as a joint company. Below is a chart featuring the full history of  the dividend: 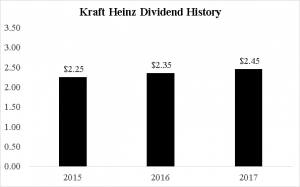 As you can see, the dividend is reviewed and increased every August. Also, based on its history, Kraft Heinz’s dividend yield is in the 2.6% to 3.2% range over its two years as a single business. One reason for the very tight dividend yield range is that the share price tends to increase along with the dividend.

Looking towards 2018, it could be a year of new beginnings for Kraft Heinz and its shareholders alike. Several things could happen that would leave a positive mark on the company’s financials.

The first is an acquisition, and this is based on the previous actions that have taken place over the past few years. We know how Kraft and Heinz merged together, but you may not be aware that in February 2017, there was a bid to purchase Unilever NV ADR (NYSE:UN). In the end, however, the bid was withdrawn and things did not work out as planned for Buffett and his partners. (Source: “Kraft Heinz withdraws Unilever takeover bid,” The Guardian, February 19, 2017.)

Since 2017’s attempt to purchase a company failed, a different company may interest Buffett and 3G Capital in 2018. The one takeaway from the failed attempt is that, at the time, Unilever had a larger market cap size compared to Kraft Heinz. That means that if another takeover offer were to be made to a different, more appropriate business, the outcome could be different. And if the next attempt succeeds, it could result in Kraft Heinz becoming the first- or second-largest food and beverage company in North America and gaining all the market share that comes with a higher rank. Of course, this would only happen with cost-cutting measures in place and increased margins.

If an acquisition occurs, shareholders would also now own a portion of a larger company while the dividend continues to grow. But if no such purchase takes place, there are two other possibilities.

One is a very large share repurchase program, reducing the overall count of the number of outstanding shares and leaving each shareholder with a larger chunk of the company. The other possibility is a onetime special dividend given to investors on top of the regular dividend payouts.

But regardless if there is a large acquisition made or not, continued dividend growth is a high possibility. This is based on the revenue more than covering the dividend, as there is always a large cash balance kept as a backup, which can also be put towards a dividend hike. Since revenue is protected from inflation and there are cost-cutting measures in place, this could result in more cash being available to reward investors with.

What’s more, the focus should turn to reducing the amount of debt on Kraft Heinz’s balance sheet. This would be yet another another cost-cutting measure since it creates a lower obligation towards the interest costs associated with the debt. But again, this would only occur if no large acquisition was made.

Warren Buffett is known for generating market-beating returns, and based on KHC stock being the largest holding within Berkshire, the belief is that there are a lot more gains ahead for the company.

2018 could be the year that there is another major catalyst, such as a large acquisition, share repurchase program, o special dividend. Of course, this is all conjecture; none of this will happen unless Kraft Heinz announces it.

One thing is for sure: since a large percentage of the company is owned by Berkshire and 3G Capital, Kraft Heinz will be sure to include them in discussions regarding the next opportunity to grow the company. And since both companies are only interested in growing their own firm’s capital, it should result in a positive outcome for all businesses and investors involved.