If you drive to the outskirts of San Jose, you will find a special tollbooth in front of the city’s landfill. Thousands of trucks pass through this gate each day. And every time a truck passes by, it must pay a toll: for each ton of rubbish carried, $85.00 must be paid to the tollbooth. Every single time.

What’s better, there’s another one of these “rubbish tollbooths” located 60 miles north, and still another one 30 miles farther. All told, you can find about 1,900 of these special toll booths across America today.

One firm owns nearly one-fifth of them. And now, this company—which has already banked $1.6 billion on these tollbooth deals—is willing to split the profits with us.

Garbage represents a big business. Each day, the average American produces four pounds of trash. In a country of nearly 326-million people, that amounts to more than 650,000 tons of garbage produced daily—enough to fill around 55,000 garbage trucks. All of that trash needs to go somewhere, and with the country’s existing landfills filled to capacity, cities and businesses will pay a pretty penny to get this rubbish off their hands.

The largest owner of these landfills is Waste Management, Inc. (NYSE:WM). The company owns 293 active landfill sites across Canada and the United States. Each time a garbage truck pulls up at one of its sites, the operator must pay a toll, or a tipping fee, to Waste Management. These tolls vary depending on the city and the waste dropped off. Typically, though, Waste Management collects $75.00 to $100.00 on each ton of household rubbish deposited. Tires, furniture, and appliances can cost upwards of $100.00 each to dispose of.

This toll income rolls in daily. Cities and businesses create a constant stream of trash that needs to be disposed of. So until Waste Management, Inc.’s facilities fill up, the company will continue to collect fees. On average, management projects the typical landfill in the company’s portfolio will continue operations for another 22 years. And executives will likely be able to extend the lifespan of these projects by expanding existing sites. That means the company can literally circle the dates on the calendar for when they’ll get paid for decades to come.

But it gets better. Nationwide, the number of active landfill sites continues to drop each year. And thanks to stiff resistance from community residents (would you want a garbage dump in your backyard), few new facilities get built. As a result, we’re running out of space to store our trash, and incumbent firms like Waste Management have cashed in.

This crisis allows existing operators to raise toll prices each year. Over the past decade, tipping fees at landfills across the country have more than doubled. Waste Management routinely raises toll rates at a mid-single digit clip each year. With few other options, customers have little choice but to cough up the extra money.

As I mentioned above, Waste Management, Inc. collects more than $1.6 billion in this landfill toll income each year. Most of this money gets passed on to shareholders in the form of dividends and stock buybacks (more on that in a second). But to pad its profits further, the company also operates three lucrative side businesses:

Side Business No. 2 – Recycling: Recycling amounts to a giant “buy-and-sell” opportunity. Waste Management buys raw material (glass, paper, aluminum cans, etc.) in the United States cheap. It then ships these materials overseas and sells it to manufacturers for a steep markup. Alternatively, the company can recycle some of these products itself stateside. Waste Management, Inc.’s profit margin comes from the spread between the price the company can fetch for these materials and the cost to buy and ship them. No doubt, the profitability of the recycling business can shift from time to time. Dividend hunters, however, don’t mind the supplemental profits it adds to their income stream.

Side Business No. 3 – Energy: Decomposing waste in landfills produces harmful greenhouse gas emissions. Rather than letting these gases escape into the atmosphere, Waste Management started collecting these emissions and selling the byproduct to utilities. Today, these projects supply more than 200 megawatts of electricity, or enough power for 180,000 homes. More importantly, the business provides a second stream of income from landfill sites in addition to toll fees.

Again, these side businesses are just gravy on top. Waste Management doesn’t need these extra income sources to turn a healthy profit. The sum product of all of these different businesses, however, can really add up.

Running a landfill can represent quite a profitable business. Once the site is built, ongoing costs come in at just a fraction of sales. You don’t need to maintain any inventory or much in the way of working capital. So as a general rule, the industry produces above average returns on invested capital. Over the past decade, Waste Management generated $0.12 in profit on every dollar of debt and equity invested into the business.

Other companies produce returns like these from time to time. It’s rare, however, to see a business sustain such high profitability over this long of a period.

This has translated into a steady, growing stream of income. Over the past decade, management has more than doubled the annual distribution to shareholders. Even through the 2008-2009 financial crisis, executives continued to boost the payout. Today, WM stock pays $1.5 billion to investors in combined dividends and stock buybacks each year. That comes out to a total shareholder yield of 3.6%. 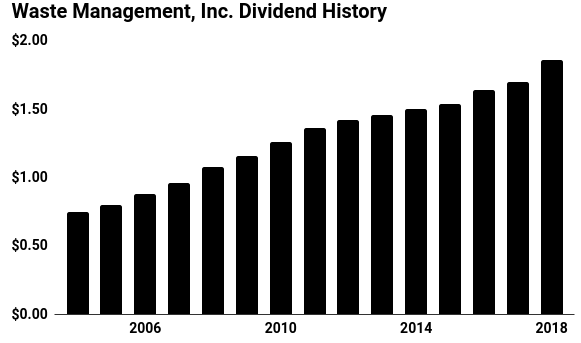 For shareholders, this combination of income and profitability has resulted in outstanding returns. Since I first recommended shares to Automated Income readers in late 2015, the stock has delivered a total return, including dividends, of 105%. That’s nearly quadruple what the broader S&P 500 returned over the same period.

But as great as these results have been so far, it’s still small potatoes compared to what’s in store. In December, management boosted the quarterly distribution 10.2% to $2.05 per share. Moreover, executives also pledged to buy back $1.5 billion in stock and promised more dividend hikes in the years ahead.

“In 2018 we expect to generate strong free cash flow and return approximately 90% of that cash to our shareholders through dividends and share repurchases,” said company President and CEO Jim Fish. “Our expected free cash flow growth, together with our disciplined approach to capital allocation, supports our decision to substantially increase our dividend rate and request a new share repurchase authorization. The planned $0.19 per share annual increase in our dividend is the highest that we have seen in fifteen years and demonstrates our confidence in the strength of the free cash flow generation of our business.” (Source: “Waste Management Announces Plan to Increase the Quarterly Dividend Rate,” Waste Management, Inc., December 13, 2018.)

Of course, those buybacks and future dividend hikes aren’t set in stone. Some of those transaction will still need approval from the board and will depend on future cash flows. Management, however, would not have made such bold promises to investors unless they were confident they could deliver. That bodes well for the company’s prospects and its future stock price.

What About the Risks?

As the biggest player in the industry, Waste Management, Inc. enjoys an enviable in the waste business. Nevertheless, the company competes with many hundreds of local and regional waste collection businesses. These competitors aren’t nearly as profitable, due in large part to their smaller size. But ongoing competition can drive down toll income from time to time. At the very least, these rivals put a ceiling on how fast Waste Management can raise tipping fees.

The recycling business remains challenging, too. In late 2017, China restricted imports of recyclable materials, partly because of rising contamination rates. That eliminated one of the biggest customers in the market, putting many small players in bankruptcy. Once again, however, Waste Management’s raw size has allowed it to survive better than most. The company has a diverse base of customers, allowing it to sidestep China if needed. Moreover, the company has Chinese inspectors at its recycling facilities in the United States. This guarantees Waste Management ships the best material overseas and ensures access to the biggest markets.

Finally: Investors need to keep an eye on interest rates. Waste Management maintains a light debt load, and much of these outstanding liabilities have been locked in at today’s low interest rates. So even if yields rise, the company won’t see much of an increase in financing costs. Nonetheless, shares compete directly with fixed-income securities for capital. If bonds offer a better deal, traders would likely sell off their WM shares.

How to Cash In on Rubbish Toll Booths

As investments go, dumps have none of the sex appeal of a hot new tech gadget or a gleaming office tower. But even though the industry is about as unassuming as you can get, owning a landfill toll booth turns out to be a pretty solid investment—often better than other kinds of stocks and bonds.

Each day, thousands of garbage trucks show up at Waste Management, Inc.’s facilities. Most of this money gets paid out to shareholders through dividends and stock buybacks. Throw in some additional side businesses as “kickers,” and you have a money-making machine on your hands.