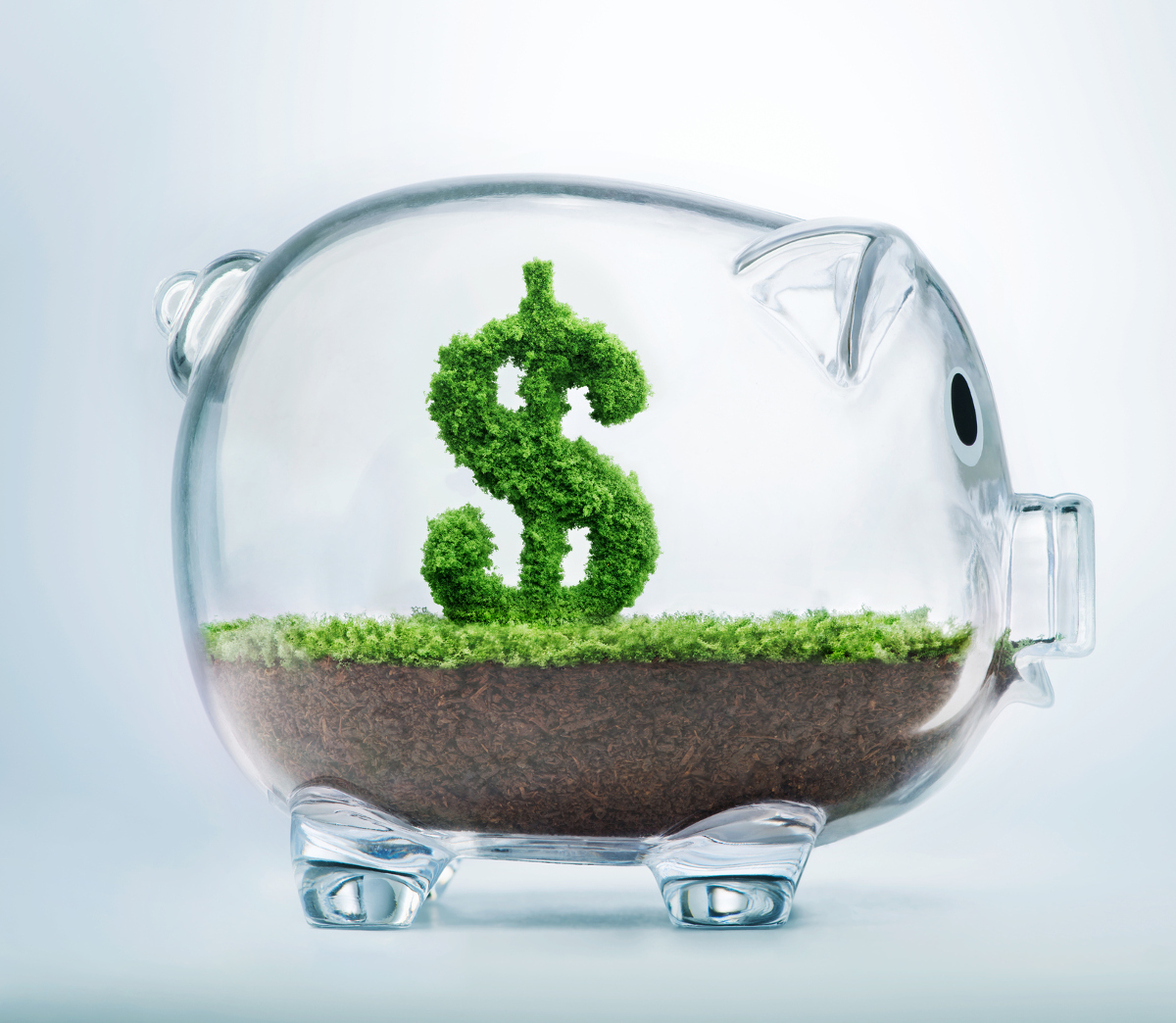 How to Use Dividend Stocks to Retire Early 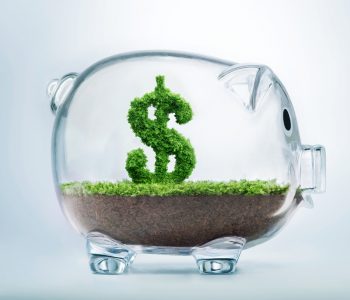 How to Retire Early with Stocks

Retirement investors make up a sizable portion of our readership, and that’s in part due to the power of dividend stocks. With the right stock portfolio and enough patience, an investor can build a significant amount of wealth over time. In this article, we are going to take a look at how to retire early with stocks.

The first thing to note about retirement investing is that each investor will likely have their own goals and risk profile. Even though we are talking about using dividend stocks to retire early, a portfolio optimized for someone who is 25 and who had just started saving for retirement will probably contain a different set of stocks than a portfolio for someone who is 55. Therefore, before taking out your checkbook, it is critical to understand what your investment goals are and how much risk you are willing to take.

When someone stops working and retires, their paychecks stop coming, too, so it’s important for them to have another source of income to (at least partially) replace their paychecks. There are many types of investments that are known to generate a stream of income, including bonds, dividend stocks, and income properties, just to name a few.

In order for these instruments to generate enough income to cover monthly expenses, the investor needs to have a big enough portfolio. The reason is that, even with the best dividend stocks, someone sitting on a $5,000 portfolio is probably not going to get enough dividends from it to cover their day-to-day expenses.

As discussed in an article by my colleague Gaurav, one of the things to consider in early retirement planning is what kind of lifestyle you want. If you plan to maintain your current lifestyle, you will likely need a bigger investment portfoliothan if you are willing to downgrade some aspects of your lifestyle in retirement.

Plenty of numbers have been given on just how much money is needed to be able to retire. According to some, the number can be quite substantial. For instance, Fidelity Investments has estimated that a 65-year-old couple entering retirement in 2016 would need to set aside approximately $260,000 just to cover the healthcare costs in retirement. This number does not include rent, groceries, gas, and all the other daily expenses. And, with inflation becoming more substantial, things could get more expensive down the road. (Source: “Health Care Costs for Couples in Retirement Rise to an Estimated $260,000, Fidelity Analysis Shows,” Fidelity Investments, August 16, 2016.)

So, how should an investor build a big enough retirement portfolio using dividend stocks?

Well, money doesn’t grow on trees. To build a portfolio of dividend stocks to help the investor retire early, they need to start saving.

Some people managed to retire extremely early by living a very frugal lifestyle. For instance, a Canadian couple were able to retire in their early 30s and are living off the more-than-$1.0 million they saved. (Source: “How This Couple Saved $1 Million And Retired In Their 30s,” Forbes, May 27, 2016.)

They were both engineers and started working with annual salaries of just over $50,000. Eventually their salaries grew to be six figures, but they didn’t spend it all. To save electricity, they would hang their clothes out in the sun instead of using the dryer. In colder times, they would wear sweaters around the house instead of turning up the heat.

Now, with seven figures in savings, the coupe is living in a beach house in Costa Rica.

I do not hold the opinion that everyone who wants to retire early needs to drip dry their clothes. But saving—especially when started early—can make a huge difference in the amount of wealth that people build over time.

In fact, if there is only one piece of early retirement investment advice, it would be to start saving early.

In an earlier column on retirement planning do’s and don’ts, I talked about why retirement investors should start early. I used an example to illustrate the power of compound interest; someone who is investing $10,000 a year into a portfolio that returns five percent annually could accumulate around $125,779 by age 65 if they started at 55. For someone starting at 30, the amount would be more than $900,000 when they reach 65.

Does the power of compounding work with dividend stocks? Most definitely.

When building wealth using dividend stocks, one of the most important things to note is that you are investing, rather than trading. Some may think that because they are pretty far from retirement age, they should start saving for retirement by trading the hottest tickers in the tech sector. However, due to the risks involved in trading and the time and effort involved monitoring all the positions, it may not be the best way for income investors to build wealth over time.

Think about it: you have already worked hard to earn your money in the first place, why do you have to spend time and effort constantly to work for it again?

Investing in solid dividend-paying stocks allows investors to let the money work for them rather than the other way around. In particular, investors saving for retirement should consider dividend growth stocks.

A few percent of dividend yield may not seem like much. But over time, they could boost a portfolio’s return tremendously.

First, the companies with growing dividends likely have some sort of durable competitive advantage. Dividends come from the cash that a company generates. Earnings can be adjusted, but dividends are cold, hard cash paid out to investors.

For a company to raise its payout year after year, it will need to generate recurring and increasing business. The company could also borrow money to fund its dividend payments, but continued borrowing would not be sustainable in the long term without a growing business. To have a growing business in the long run, the company must have some sort of durable competitive advantage—an economic moat that protects its profits from the competitors.

Second, if an investor who is saving for retirement buys shares of a company that’s set to grow its dividends, they would see their dividend checks increasing. When the investor reaches retirement, they could simply use those increasing dividend checks as a source of passive income. Moreover, when a company can grow its business and dividends in the long run, it provides investors protection against rising inflation.

And then there’s the power of long-term value accumulation. When a company grows its business and generates higher revenue and profits, its valuation is likely to have gone up too. The increase in valuation may not be that obvious in the short term. However, as Warren Buffett’s mentor Benjamin Graham once said, “In the short run, the market is a voting machine but in the long run, it is a weighing machine.” Companies that can survive and grow their business in the long term will eventually get noticed by investors.

One of the best examples of how a dividend growth company can help investors build long term wealth—and hopefully help them retire early—is Johnson & Johnson (NYSE:JNJ).

Having started out by making ready-to-use surgical dressings and commercial first aid kits, Johnson & Johnson has grown to a multinational company with entrenched positions in the pharmaceuticals, medical devices, and consumer goods markets.

While the company currently has operations in 60 countries and sells products all over the world, it didn’t start out this way. In other words, there was a growing process. If an investor bought shares of JNJ when it was smaller but still a leader in its operating markets, they could see enormous returns. 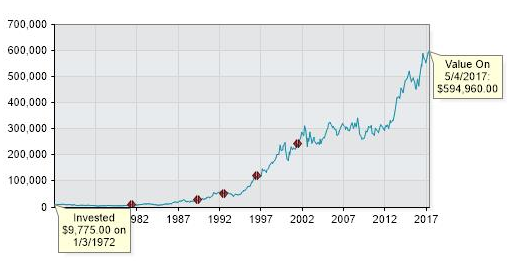 And that’s just the return in stock price appreciation alone. It does not include all the handsome dividends the investor collected every quarter over the holding period.

Speaking of dividends, Johnson & Johnson has been growing its payout for 55 consecutive years. This means that the investor who bought 100 shares of JNJ stock in January 1972 enjoyed a payout increase every single year during the holding period. (Source: “Dividend History,” Johnson & Johnson, last accessed May 5, 2017.)

Remember I said that the power of compound interest also works for dividend stocks? In this case, it involves signing up for Johnson & Johnson’s dividend reinvestment program (DRIP). For investors that are working towards early retirement and don’t need to use the cash dividends, reinvesting dividends can have a snowball effect.

So, just how much more will the investor have if they reinvested all the dividends?

Well, with the same $9,775 original investment in 1972 and all the dividends reinvested, the investor’s stake in Johnson & Johnson would have a market value of $972,579 today. That’s over $377,000 more than what their position would be worth without dividend reinvestment, or an extra return of over 3,800%.

And that’s how investors can use dividend stocks to retire early. 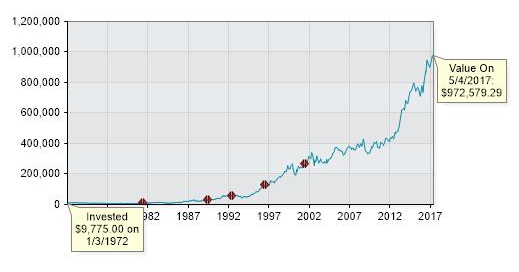 Once an investor achieves their goal to retire early, the portfolio of dividend growth stocks could keep churning out decent returns. This time, instead of using DRIPs, the investor could just start living on dividends in retirement.

One last thing to note is that in retirement, dividend growth stocks still have their value. Sure, they might not be the highest-yielding names in the market, but for people living on early retirement dividends, dividend safety is equally important. Finding companies with durable competitive advantage and consistently growing dividends is critical not just for investors saving for early retirement, but also those that are already enjoying their retirement.

Below I have compiled a list of 10 dividend stocks worth considering for retirement investors.