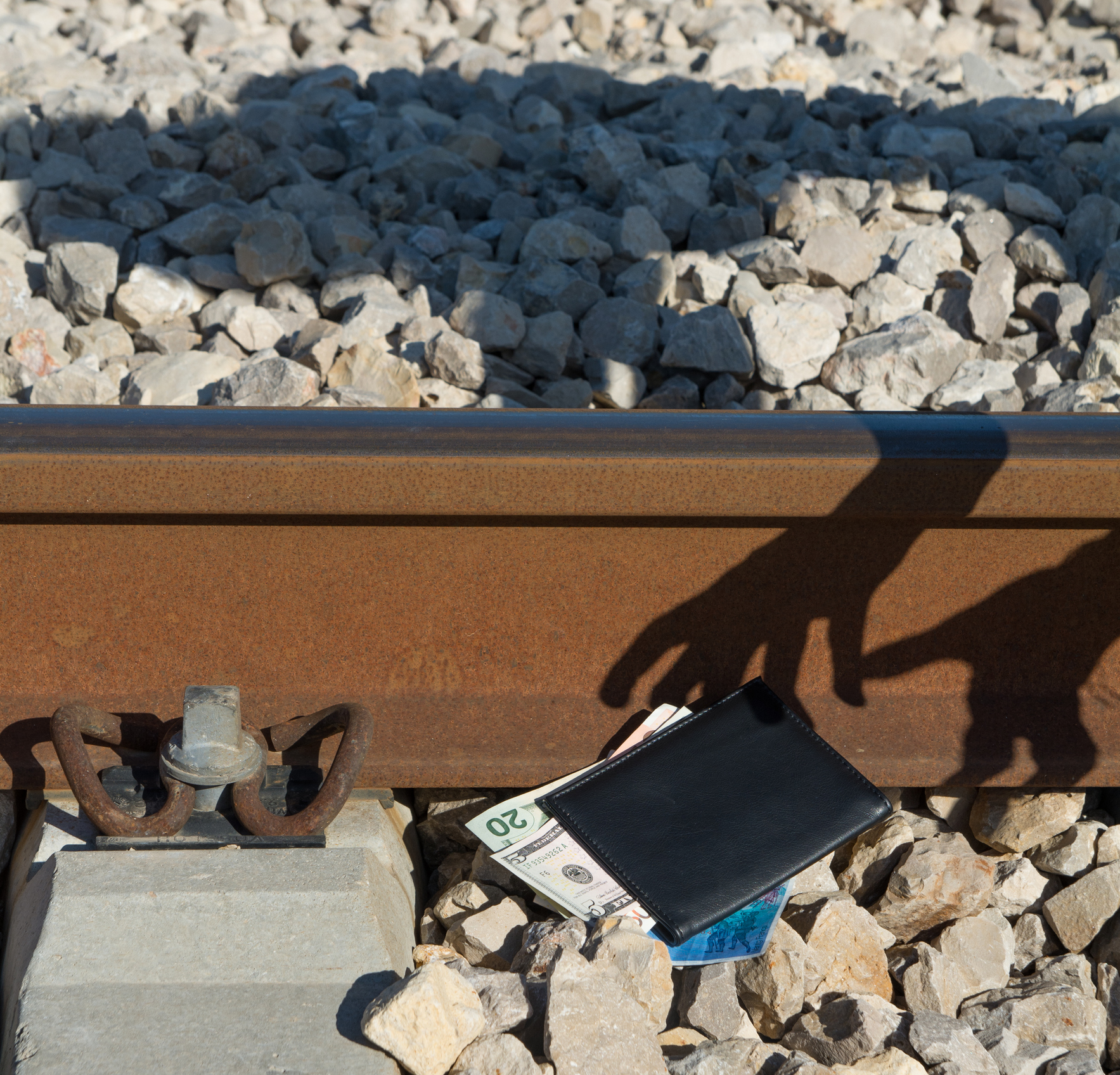 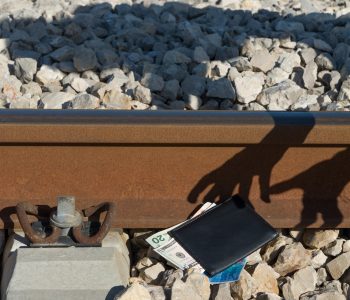 John Armitage ranks as one of the top investors on Earth, though I doubt most people have ever heard of him.

The billionaire investor founded Egerton Capital Limited in 1994. Today, it’s one of the largest hedge funds in the world, with over $18.0 billion in assets under management. Since inception, Armitage has averaged double-digit annual returns for his clients. These profits put him in the same class of great investors like George Soros and Warren Buffett.

For this reason, I always keep a close eye on Armitage’s portfolio. And in recent months, he has made some interesting bets. According to recent U.S. Securities and Exchange Commission (SEC) filings, Egerton Capital has built up huge stakes in a number of railroad stocks.

Specifically, Armitage has built up sizeable positions in CSX Corporation (NYSE:CSX) and Canadian Pacific Railway Ltd (NYSE:CP). These businesses own thousands of miles of irreplaceable rail lines and represent some of the most lucrative income streams in the stock market.

Union Pacific stands as one of the largest railroads in the United States today. The company owns 32,000 route miles of track spanning 23 states. The routes serve as the arteries for the U.S. economy, hauling everything from coal and chemicals to lumber and shipping containers and other merchandise.

No, railroads don’t make for great conversation around the office water cooler. The business, however, is incredibly profitable. Over the past decade, Union Pacific has earned between $0.14 and $0.16 in profit annually on every dollar of capital invested into operations. Over the past decade, shares have generated a total return, including dividends, of 704%.

Union Pacific’s edge comes from its low-cost advantage. Companies have lots of options for hauling freight, such as trucks, barges, and aircraft. Trains, however, are the lowest cost option for moving goods over land.

Railroads can move one ton of freight 430 miles on a single gallon of fuel, making them four times more fuel-efficient than trucking. This allows railroads to charge 10% to 30% less than truckers to transport containers along the same route. As a result, Union Pacific Corporation can undercut competitors and gain market share while still earning thick profit margins.

Furthermore, almost nobody could replicate the company’s network of track. The system spans the entire western United States, from the Pacific Ocean to the Mississippi River, capturing about half of the rail volume in the region. The company built most of these rail lines over a century ago, back when land cost pennies an acre.

Today, cities and towns have sprung up along these routes. It would cost hundreds of billions of dollars to buy out landowners and acquire rights-of-way. For this reason, the industry has constructed almost no new railroads in over 50 years, and it’s doubtful that many lines will be built over the next 50 years, either.

These economic factors have turned the railroad industry into a cozy oligopoly. In most of the markets where Union Pacific operates, it only competes against one or two rivals. Neither party, as you would imagine, has much interest in cutthroat price competition. This allows Union Pacific to earn thick profit margins and raise shipping fees year after year.

In 2018, the company earned a gross profit margin (profits earned after deducting the costs associated with making and selling its products) of 52%. Operating profit margins (profits earned after deducting all of the costs associated with running the entire business) came in at 38%. Numbers like these place Union Pacific Corporation in the ranking of some of the most profitable businesses in the world.

With $10.7 billion in annual profits, it’s easy to imagine that Union Pacific has gotten as big as it can get.

Railroads, after all, are a mature business. If the country has all of the rail lines it will ever need, how much more can earnings grow? But in a recent presentation to investors, management unveiled an audacious plan. Their vision, titled “Unified Plan 2020,” calls for squeezing more profits out of existing operations. (Source: “Union Pacific Announces Unified Plan 2020,” U.S. Securities and Exchange Commission, September 17, 2018.)

Those efforts could have a dramatic impact on Union Pacific’s profitability. In the railroad business, we measure business performance through a metric called the “operating ratio.” This measure simply takes operating costs and divides them by total revenue. And while this figure can vary between companies for a variety of reasons, the lower the figure, the better.

In the case of Union Pacific Corporation, the company has an operating ratio of 62%, which places it right in the middle of its industry peers. Management hopes to drop this ratio to 55% over the next few years. If achieved, this would allow Union Pacific to grow earnings at a mid-teen clip with minimal top-line growth. Moreover, it would free up an enormous amount of cash flow for shareholder-friendly dividends and stock buybacks.

And this strategy has worked before. Railroad industry legend Hunter Harrison implemented a similar approach at rivals like CSX, Canadian Pacific, and Canadian National Railway (NYSE:CNI). Over the following years, all three of those stocks went on to deliver triple-digit returns for shareholders. That probably explains why John Armitage has taken such an interest in the stock.

For shareholders, UNP stock has emerged as a cash machine.

The company has paid out dividends for over a century. Moreover, those payments continued to roll in like clockwork even through the last financial crisis. Today, the business pays out a yearly distribution of $3.20 per share, which comes out to an annual yield of two percent. 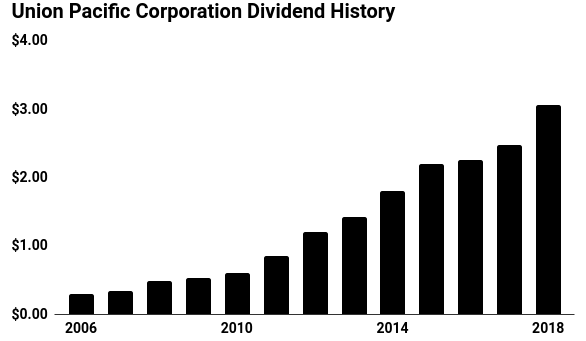 But this figure doesn’t give analysts the full picture as to how much cash Union Pacific pays out to shareholders. In addition to dividends, the company also buys back an enormous amount of stock (which I often describe as a kind of “stealth” dividend).

Last year, total repurchases topped $8.3 billion. If you factor this number into your calculation, the total shareholder yield on UNP stock jumps to nine percent.

This combination of a high upfront yield and steady growth should translate into tidy returns for investors. With a yield of nine percent and the prospect of distribution growth coming in between five and six percent per year, Union Pacific shares have a total return potential of around 15%. That more than meets my hurdle rate for such a wonderful business.

Coal accounts for a sizeable fraction of industry revenues. But as demand falls due to cheaper natural gas, the number of coal shipments has dropped considerably in recent years. Carbon taxes, always a threat if political winds shift in Washington, could accelerate this decline.

Union Pacific Corporation has positioned itself better than most for a downturn. Namely, coal accounts for only a modest percentage of the company’s total revenue. Still, it’s a risk that investors should keep an eye on.

Also, keep in mind that railroad profitability depends in large part on the health of the U.S. economy. Any downturn would result in fewer shipments, which by extension means lower profits.

Here’s how I like to think about it: Over the next 100 years, we’re going to have a few bad years. And we can’t predict when those bad years will occur. But over this period, we’re going to have more people living in this country. And those people are going to demand an ever-increasing number of goods. Union Pacific will play a critical role in moving those goods from place to place.

When you start thinking in those kinds of time frames, the risk of a downturn doesn’t seem like a big deal. Union Pacific has survived countless downturns before and is well positioned to survive the next recession.

I suspect that the company will keep chugging through any number of challenges ahead.

The Bottom Line on UNP Stock

What could all of these people see in Union Pacific Corporation and UNP stock? A lot more upside ahead, it seems like.