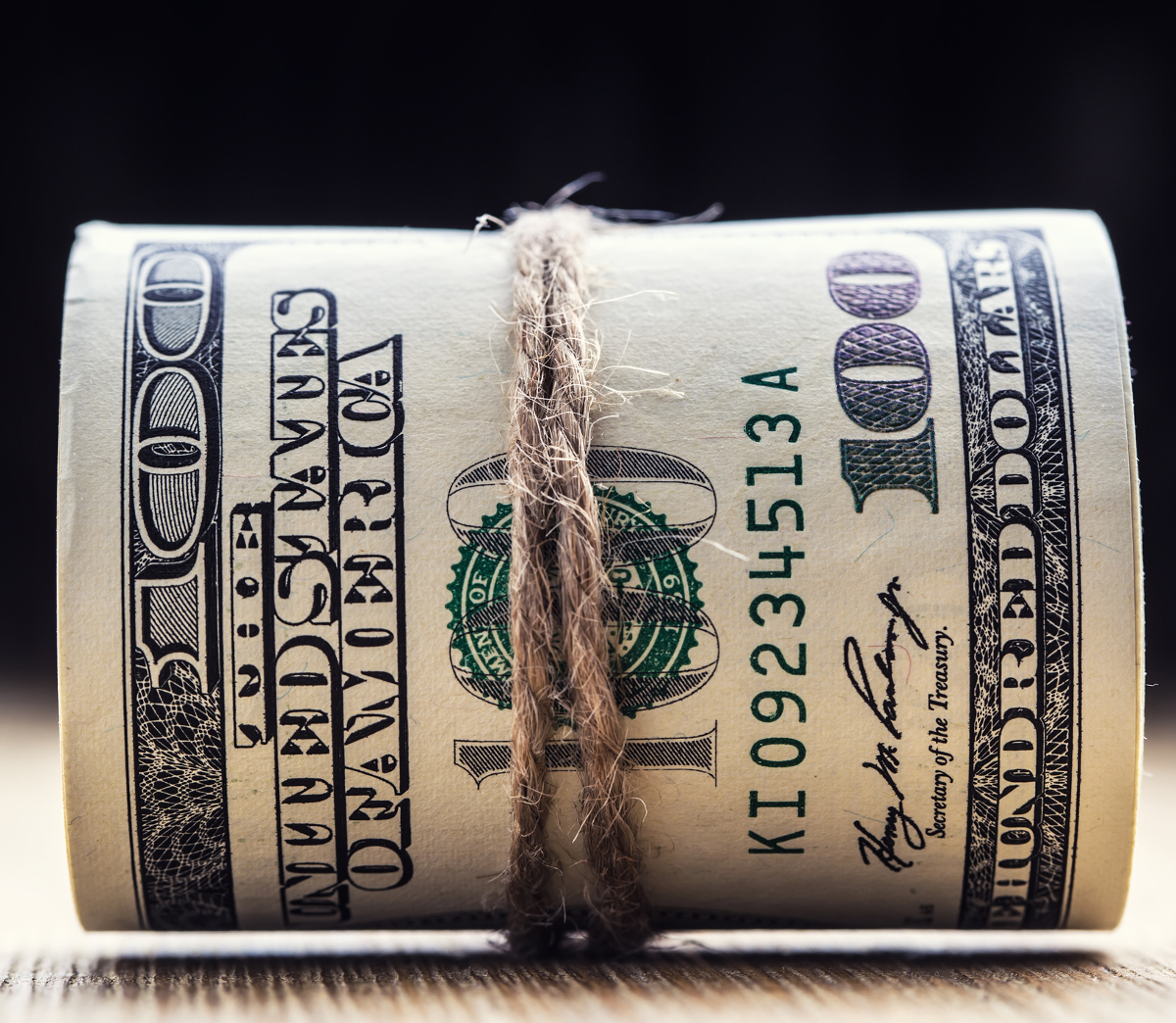 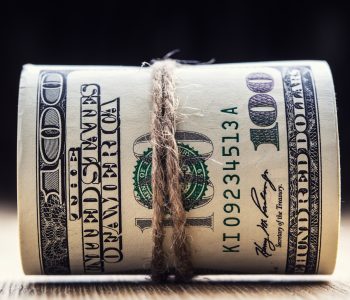 Billionaire investor Warren Buffett is known for generating enormous returns for his company, Berkshire Hathaway Inc. (NYSE:BRK.B), and its shareholders. Thanks to his genius, Berkshire saw its market value skyrocket 1,972,595% from 1964 to 2016, smashing the S&P 500 Index’s 12,717% total return over the same period. One thing that’s lesser known about Warren Buffett’s investment strategies is the use of dividend stocks. In this article, we are going to take a look at a set of rules that can help identify the best Warren Buffett dividend stocks.

Dividend stocks used to play a much more important role in stock market investing than they do today. But Warren Buffett is still fond of solid dividend-paying companies. If you take a look at the current portfolio of Berkshire, you would see that nine out of its top 10 holdings pay a dividend. (Source: “Form 13F,” United States Securities and Exchange Commission, last accessed May 17, 2017.)

With Berkshire’s total holding value north of $158.0 billion, I wouldn’t be surprised if Warren Buffett’s dividend income is in the hundreds of millions every year. To see how regular investors can build a rock-solid income portfolio, let’s learn from the very best in the business.

Only Invest in Businesses That You Can Understand

In Warren Buffett’s investment rules, understanding a business is a prerequisite for investing in it.

This seems like a very obvious one; if you don’t even understand what the business is about, how would you know if it can deliver the investment results you are looking for?

Still, when media outlets talk about how the hottest tech stocks went up by double digits in a single day, it may seem tempting to chase the trending tickers. But for long-term dividend investors, market price shouldn’t be the only focus. In fact, Buffett even said that the business you invest in should be so solid that you would own it even if there’s no market to sell it in:

“Buy a stock the way you would buy a house. Understand and like it such that you’d be content to own it in the absence of any market.”

So, does that mean you have to be an expert on every kind of business?

Not really. Even Buffett himself does not know everything. What matters though, is knowing one’s boundary:

“What counts for most people in investing is not how much they know, but rather how realistically they define what they don’t know.”

In economics, we learned that under perfect competition, firms make zero economic profit, which is also known as “normal profit.” In other words, their total revenue equates total cost. This doesn’t mean their income statement would necessarily have a big zero on the bottom line because economic profit includes opportunity cost; companies can still make positive accounting profit. It’s just that investors of a company operating in perfect competition would not be able to earn any more returns than they can earn elsewhere.

Sounds a bit disappointing, right? The idea is that if a company is making a generic product and earning abnormally high profits, other companies would notice and enter the industry. With increasing supply, the first company would no longer have market power. Once competition reaches a certain point, companies—including the first one—will become “price takers” rather than “price setters” and they won’t be able to make abnormally large profits anymore.

Now, you might be wondering, “How does this have anything to do with Warren Buffett’s stock picking techniques?” Well, think about it: Buffett was able to consistently earn higher returns on his investment than what the stock market was offering. So he obviously wasn’t investing in companies that were earning zero economic profit. Instead, he invested in businesses with durable competitive advantages.

A company’s durable competitive advantage can come from many different things, such as intellectual property, brand name, and an industry’s high barriers to entry. Findings companies with sustainable advantages is one of the most important things in Warren Buffet’s guide to investing in dividend stocks.

If you take a look at Warren Buffett’s dividend stock holdings, you would see that almost every company he owns has some sort of durable competitive advantage.

Take The Coca-Cola Co (NYSE:KO) as an example. Making soda doesn’t seem to be an exciting business, but Coca-Cola is a multinational beverage giant commanding more than $180.0 billion in market cap. Every day, 1.9-billion servings of Coca Cola’s beverages are consumed by people around the world.

Coca-Cola’s competitive advantage comes from its strong brand portfolio and unrivaled distribution network. According to Interbrand, Coca-Cola is currently the third-most valuable brand in the world, with an estimated value of $31.0 billion. (Source: “Coca Cola,” Interbrand, last accessed May 17, 2017.)

Consumers are willing to pay a premium for brand-name products, especially when it comes to things they put in their body. Combined with a huge global distribution network and Coca-Cola is able to establish market leading positions in almost every corner on Earth.

Sure, there are other companies selling similar products, but Coke still has a large, loyal following, including the “Oracle of Omaha” himself; Buffett once said that he consumes about 700 calories of Coke every single day. (Source: “Buffett defends Berkshire’s big Coke stake,” CNBC, May 2, 2016.)

Buffett invested more than $1.0-billion worth of Coca-Cola shares back in 1988. Looking at KO stock’s performance chart below, it’s easy to see that the investment has served him quite well. 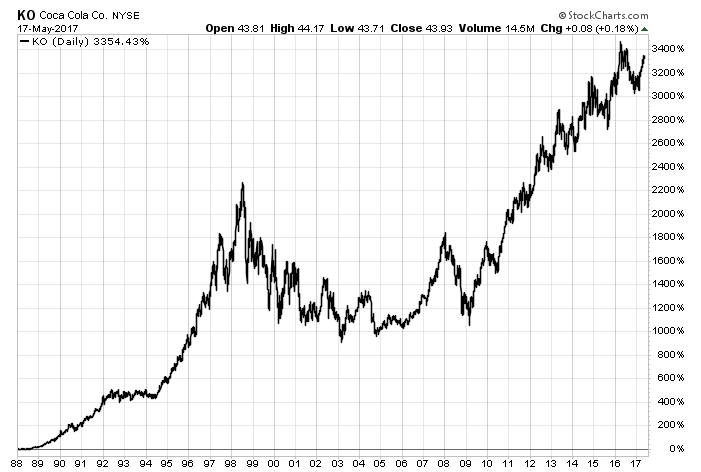 Today, Coca-Cola remains one of the largest Warren Buffett dividend stock holdings. By the end of March, Berkshire owned 400-million shares of KO stock, valued at a whopping $17.6 billion.

Many investors like companies working on the latest technology products. If they can capture the first-mover advantage in those upcoming industries, there could be huge returns. Just take a look at how much the share price of a certain electric car company went up in the last few years and you’ll see what I mean.

Buffett, on the other hand, is not really known for investing in up-and-coming technology companies. Instead, he favors companies with entrenched positions in slow-changing industries. Again, Coca-Cola serves as the perfect example; the company’s core product has essentially been the same for over a century, and is still helping Coca-Cola make billions of dollars every year.

Other than Coca-Cola, Buffett’s preference for slow changing businesses can also be seen in his huge stakes in Kraft Heinz Co (NASDAQ:KHC) and Wells Fargo & Co (NYSE:WFC), among others. Ketchup and banking are not usually things you see in the headlines, but these businesses have been rewarding shareholders for decades.

One of the reasons behind investing in slow-changing industries is that they don’t require a lot of investments to keep going. In the fast-changing tech world, many companies have to reinvest a significant part of their earnings (if they have any) just to make sure they don’t become obsolete in the next few years. In slow-changing industries, there is no such pressure, so companies can distribute some of their earnings to shareholders in the form of dividends.

This does not mean that tech companies can’t be solid dividend stocks. For instance, Buffett has invested billions of dollars in Apple Inc. (NASDAQ:AAPL) over the past year. However, he only did so after Apple built a huge recurring business and became willing to pay meaningful dividends.

Have a Margin of Safety

Income investors are usually on the more conservative side of the risk aversion spectrum. Having a margin of safety is one of the best ways to limit downside risk.

The strategy is easy to understand, but not that easy to implement. For instance, by looking at Buffett’s portfolio, we can see some great dividend-paying companies. What’s more difficult, though, is deciding when the best time is to purchase them. Buffett didn’t buy those companies today; for many of his top picks, Buffett bought them when they were much cheaper.

Also, a lot of investors are willing to pay premium for the most solid companies. For instance, “dividend aristocrats,” a group of elite dividend-paying stocks, sometimes carry higher valuations than other dividend stocks.

Still, if you have to go with either quality or price, Buffett would probably favor quality, as long as the price is not too outrageous:

At the end of the day, keep in mind that there is no perfect “Warren Buffett stock picking” formula. Learning about businesses and determining their intrinsic value takes time and effort.

So for those that don’t want to conduct extensive research on their own, is there still a way to make a decent return?

“When trillions of dollars are managed by Wall Streeters charging high fees, it will usually be the managers who reap outsized profits, not the clients. Both large and small investors should stick with low-cost index funds.”

He even made a $1.0-million bet in 2007 that a low-cost S&P 500 Index fund would outperform five funds of hedge funds selected by Ted Seides at Protégé Partners over the next 10 years. How did that bet go?

Here is a table of their performance. As you can see, Buffett’s S&P index fund was able to outperform each of the funds by a wide margin by the end of 2016.

So, for investors that don’t want to spend too much time and effort picking stocks, low-cost index funds could be the way to go. Buffett’s choice in the bet, Vanguard 500 Index Fund Admiral Class (MUTF:VFIAX), is currently yielding 1.98%.