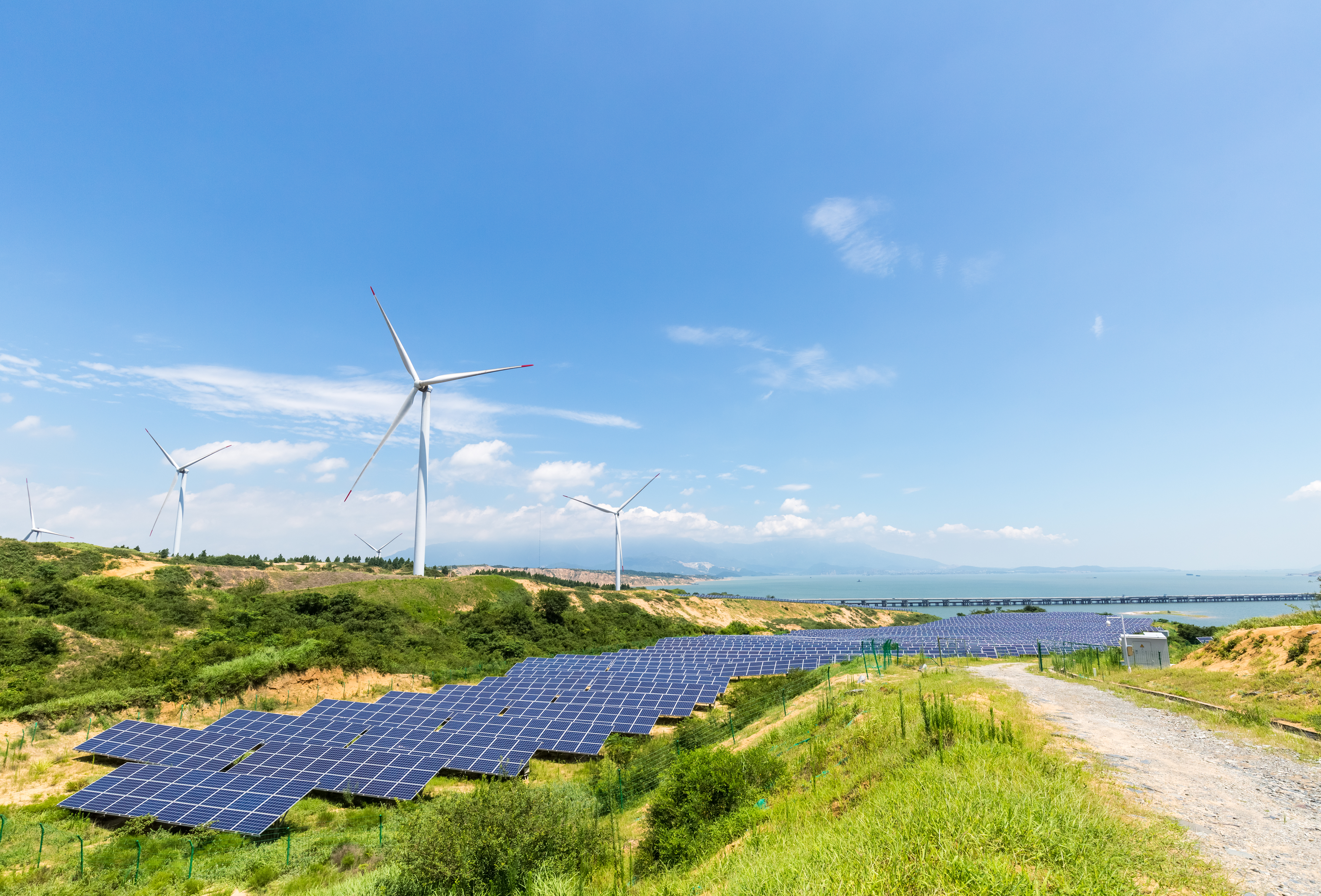 The “Tesla of Utilities” 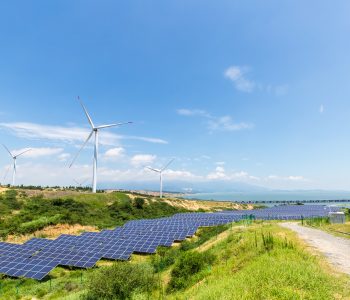 The shift to renewable energy isn’t just a possibility, it’s an inevitability.

Regardless of how you feel about climate change, governments and businesses across the country have started to “do something” about carbon emissions. Over the past decade, the total power generated from clean technologies like wind and solar has increased eightfold. That has created overnight fortunes for those on the forefront of this boom. (Source: “IEEFA update: Unmistakable Trends in American Wind and Solar,” The Institute for Energy Economics and Financial Analysis, July 13, 2018.)

All of which is good news for companies like NextEra Energy Inc (NYSE:NEE). I have dubbed this business the “Tesla of utilities” because it has quietly taken over the renewable power business in the United States. And for NEE shareholders, that has translated into outstanding returns (not to mention a lucrative stream of dividend income). But first, let me tell you how I came across this opportunity.

Look: I’ll admit to being a little skeptical of the new clean energy investment thesis. For decades, the industry was long on promise but short on profits. More recently, the group’s reputation took another hit thanks to the mass failings of infamous “yieldcos.” This collection of green energy stocks, many of which collapsed between 2015 and 2016, sank under the weight of mounting debt loads and ballooning costs.

While I love the idea of producing clean energy, clean investments seemed to only produce debt, defaults, and disillusion.

But after a rocky start, new technologies have turned green industries into quite profitable businesses. Bigger turbines have halved the cost of building new wind farms. More efficient solar wafers have resulted in the price of new solar panels plunging by 80% over the past decade. Both of those sectors have also benefited from bigger projects, which translates to improved economies of scale and more efficient installation methods. (Source: “How Much Damage are Trump’s Solar Tariffs Doing to the U.S. Industry?,” Inside Climate News, August 20, 2018.)

In other words, the industry seems to have worked out the kinks that plagued previous generations of green investors.

None of which is to imply everything is perfect. The wind doesn’t always blow and the sun doesn’t always shine. But the utility industry has found ways around the problem by combining wind and solar with storage technologies (batteries and hydro) or fossil fuels.

Regardless, the lower price tag for renewable energy has totally upended the utility business. Today, nearly half of the power capacity installed in the country each year comes from wind and solar. Renewable energy production nationwide recently surpassed coal for the first time in over 100 years. And by the end of 2020, one out of every five megawatts of power piped into American homes will come from renewable sources. (Source: “EIA Predicts Growth in Renewable Electricity Generation,” Biomass Magazine, July 7, 2020.)

And a recent story in the Wall Street Journal revealed that pension funds, insurance companies, and other private equity firms have poured billions of dollars into clean energy investments, attracted to the above-average returns and steady cash flows.

Florida-based NextEra has emerged at the forefront of this boom.

In 2001, the company ranked as only the 30th on the list of U.S. power companies by market cap, with a total value of only $10.2 billion. But over the past two decades, NextEra has quietly assembled an empire of wind farms and solar plants. Today, the company produces more megawatt-hours of electricity from clean energy sources than any other company in the world. (Source: “June 2020 Investor Presentation,” NextEra Energy Inc, last accessed August 17, 2020.)

And with a market capitalization now approaching $140.0 billion, NextEra has cemented its spot as the largest power producer in the country.

The secret to the company’s success? A relentless focus on the numbers.

CEO James Robo eschews the kind of “change-the-world” mentality trumpeted by other green-energy companies. In fact, he reportedly avoids hiring the type of people who got into the business to save the planet.

Instead, the Harvard MBA meticulously studies the financials of every deal, avoiding low-return projects and rosy profit projections. Moreover, Robo only commits to building new projects after having customers lined up, and he tries to keep the company’s debts at manageable levels. This simple formula has allowed NextEra to sidestep the type of financial problems that have torpedoed rivals like SunEdison Inc. and TerraForm Power, Inc .

Clean energy assets, managed properly, basically amount to a collection of cash cows. Sure, new wind farms and solar plants cost a lot of money up front. But once you have one up and running, the ongoing costs come in at just a fraction of revenue. The facilities make money every time the wind blows or the sun shines. They’ll do their job for the next 50 years, through wars, financial crises, or health pandemics. And because each project is fully subscribed under long-term contracts, investors know their cash flows will roll in like clockwork.

So what does management do with all of the cash flow from these projects? For the most part, they pay it out to shareholders.

Since 2015, NextEra has boosted its payout at a 10% compounded annual clip. Today, NEE shares pay a quarterly distribution of $1.40 apiece, which comes out to an annual yield of two percent. (Source: “Historical Dividend Information,” NextEra Energy Inc, last accessed August 17, 2020.) 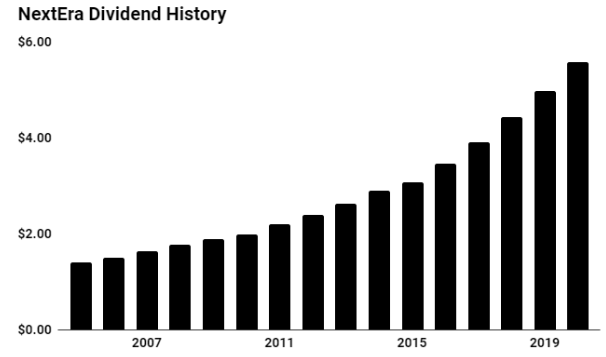 And that payout looks poised to continue to grow.

NextEra has over 12.0 gigawatts of wind and solar projects in various stages of leasing and development, enough to power 8.4 million homes. Management also has plans to look beyond traditional utility customers and start selling directly to large corporations like Apple Inc. (NASDAQ:AAPL) and Amazon.com, Inc. (NASDAQ:AMZN), who will pay a premium for green energy to boost their public images.  (Source: “June 2020 Investor Presentation,” NextEra Energy Inc, op. cit.)

All of which should translate into a growing stream of income. Over the next five years, Wall Street expects NextEra to boost earnings per share at a low-teen annual clip. Management’s history of beating analysts’ expectations means those numbers could be too conservative. And given the company’s modest payout ratio and debt load, NextEra executives should have no problem boosting the dividend in line with profits. (Source: “NextEra Energy, Inc. (NEE) – Analysis,” Yahoo! Finance, NextEra Energy Inc, last accessed August 17, 2020.)

In the utility business, regulators set the rates that companies can charge their customers. Historically, NextEra has maintained good relations with these agencies, thus allowing the company to earn above-average returns on investments. But if the regulatory landscape changes for the worse, so too will the firm’s profit margins.

The other risks look more mundane. The end of government subsidies for green energy could take a bite out of earnings. But given the plunging cost to bring new renewable projects online, wind and solar often outcompete fossil fuels on their own. And the potential election of a Democratic president this fall bodes well for the industry.

Higher interest rates could also knock down NEE shares. If yields rise, traders will be tempted to rotate out of NextEra stock and into safer bonds. But I would consider any sell-off that resulted from a spike in interest rates as an opportunity.

NextEra Energy Inc doesn’t have the fanfare of other green energy stocks like Tesla, but it certainly has the same potential. With a two percent—and growing—distribution yield, a long growth runway, and a collection of cash cow assets, NextEra is a top dividend stock for 2020 and beyond.