I like companies that have become household names. The brand recognition means they have a large enough customer reach. And very often, that translates to recurring business. AT&T Inc. (NYSE:T) is one of those companies.

For many people, smartphones and computers have become necessities in life. This has brought stronger demand for wireless and Internet services. Because of that, AT&T is able to generate a recurring and growing business.

The No. 1 reason to consider AT&T stock is its rock-solid dividends. AT&T is a “dividend aristocrat,” a title given only to companies that have raised their annual dividends every year for at least 25 years.

As a matter of fact, AT&T has paid increasing dividend for 33 consecutive years. The chart below shows the company’s quarterly payout since 2000. 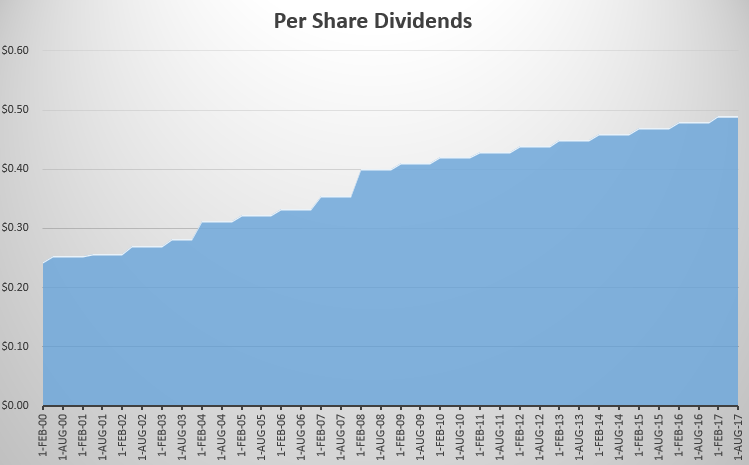 Of course, there are companies with even longer histories of dividend hikes. However, because of their reputation, investors have already bid up their prices.

A company’s dividend yield moves inversely to its share price. So, when these companies’ shares rally, their yields get lower.

And that’s why AT&T stock stands out. If you invest in all the dividend aristocrats right now through the ProShares S&P 500 Dividend Aristocrats ETF (BATS:NOBL), you would be collecting an annual dividend yield of 1.91%.

If you go with AT&T stock, though, the return from dividends would be a lot more substantial. Paying $0.49 per share on a quarterly basis, AT&T stock has an annual dividend yield of 5.03%.

In fact, AT&T is one of the few companies that have delivered decades of dividend growth and still offers a decent current yield. And the best part is, the company’s business is more than solid.

Reasons AT&T Is the Best Income Stock for 2017

Over the years, our cell phone bills have only been going up. Being a carrier is definitely a good way to make money.

In most cases, when a company is making abnormally large profits, other businesses will want a piece of the action too. As more companies enter the market and competition increases, the first company would not be making as much profit as before.

However, you can’t just start a telecom company and compete with AT&T. The Dallas, Texas-based communications giant has a global IP network that connects businesses on six continents, representing 99% of the entire world’s economy. The connectivity is backed by more than 1.1 million route miles of fiber.

In the U.S. and Mexico, more than 400 million people can access AT&T’s 4G LTE network. Around the world, there are over 200 countries in which the company offers talk, text, and data coverage.

The reality is that the investments needed to build the telecom infrastructure are prohibitively expensive. And even if you have the money, getting the regulatory approval is no walk in the park. In other words, the telecom business has high barriers to entry. This allows existing companies like AT&T to keep making handsome profits. 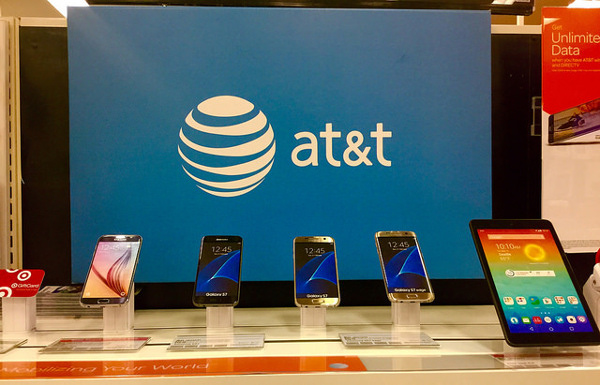 Collecting dividends may seem like a slow way of making money. With high-momentum stocks making double-digit moves every other day, who cares about a few percentages of dividend yield?

The thing is, though, a dividend-paying company can also deliver strong growth. Once the market realizes that, the dividend stock could easily turn into a growth stock. 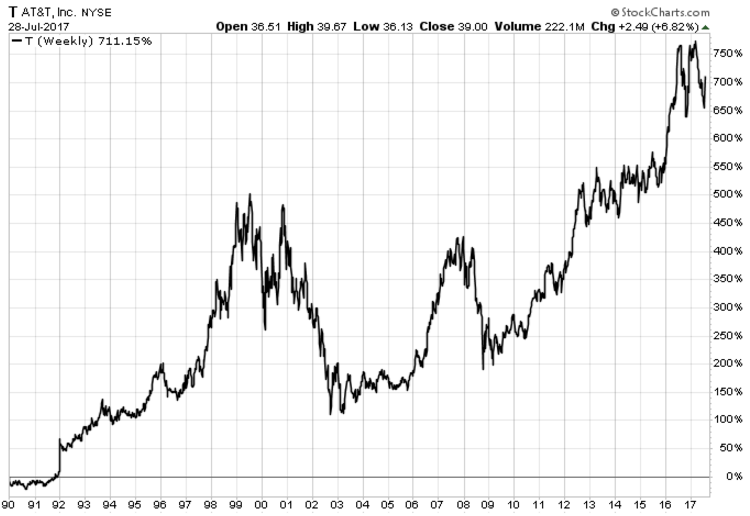 As shown by AT&T’s stock chart above, the company has delivered more than 700% in returns since 1990.

The best part is, business could get even better. Thanks to its acquisition of DirecTV, AT&T is now the largest provider of pay TV in the U.S., with approximately 25 million linear video subscribers. As we enter the Internet of Things (IoT) era, more devices are expected to be connected, meaning more demand for wireless connection services than ever before.

With a wonderful business, generous dividends, and great prospects, AT&T is a top pick for 2017 and beyond.