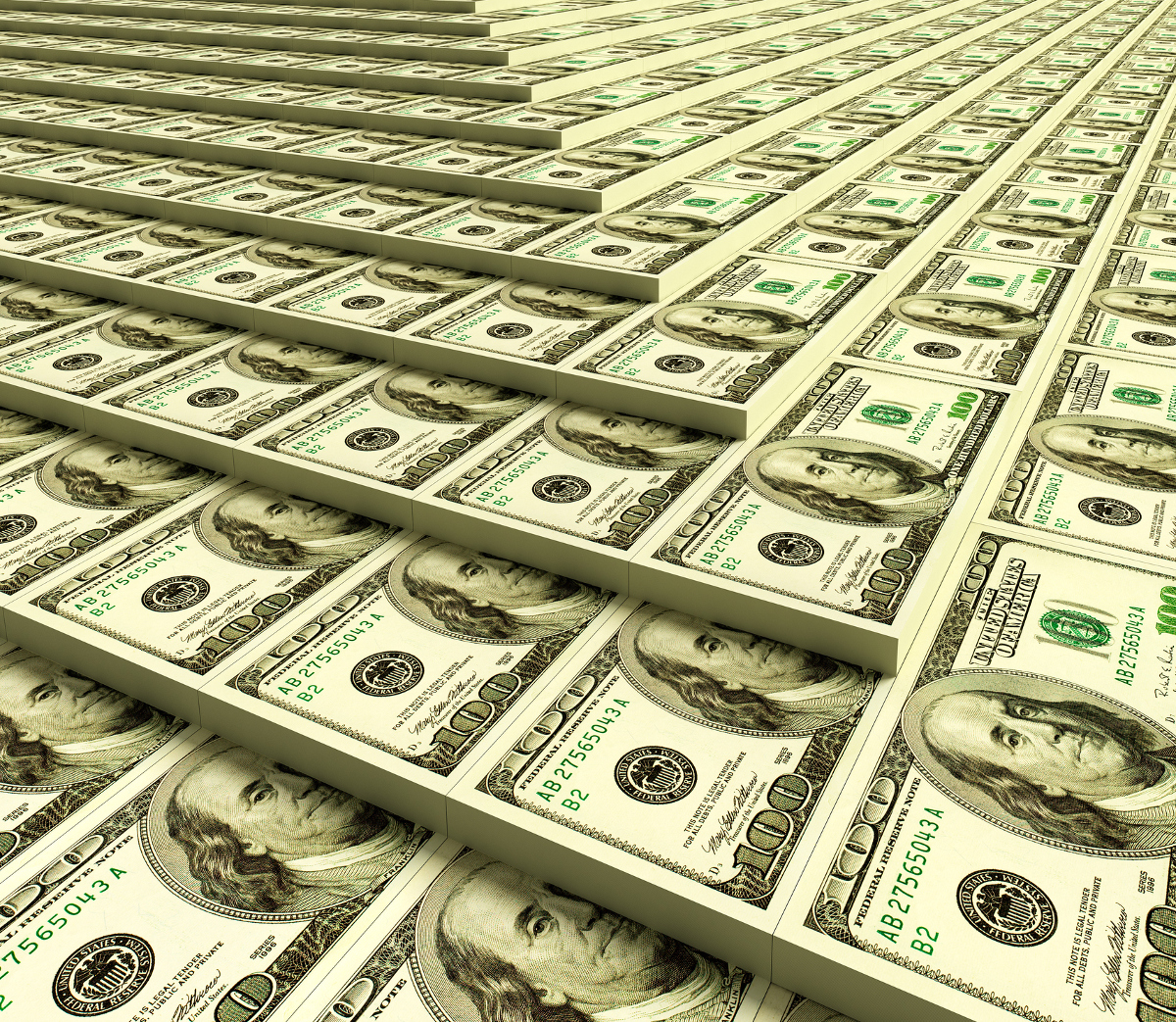 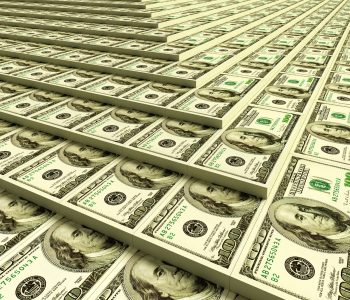 It’s no secret that investors have been using dividend-paying stocks to generate an income stream from their portfolios. For long-term investors, one particular group of stocks have done an outstanding job at providing that income stream: S&P 500 “dividend aristocrats.” These are companies in the S&P 500 Index that have increased their dividends every year for at least the past 25 years. In this article, we are going to take a look at the dividend aristocrats list for 2017 and everything you need to know about them.

Why Should Investors Consider Dividend Aristocrats?

Before we move on to the current dividend aristocrats list, let’s first go over what makes these dividend stocks special.

This might not seem like a big deal at the moment. With the stock market advancing double digits in the past year, not everyone cared about a few percent of dividend yield. However, the market is not easy to predict. As we have seen numerous times throughout history, market crashes often arrive at unexpected times. It is during those times that solid dividend stocks start to truly shine. Because if a company wants to pay a dividend, it doesn’t need the approval of the stock market.

Also, dividend aristocrats can make an investor’s life easier simply because of what they offer: dividends. Trading stocks requires time and effort, and even if you provide those two, there is still a significant amount of risk involved. Maybe one of your friends just made a killing trading some hot tickers, but as income investors, is that what you really want to get into?

Dividend aristocrats, on the other hand, are usually blue-chip companies with entrenched positions in the markets they operate in. They command large market caps and can be less volatile than, say, the hottest tech stocks. Rather than making a quick buck from increases in their share price, the goal of owning dividend aristocrats is to collect a steadily increasing income. So investors of these dividend-paying companies don’t have to worry too much about what the market might be doing the next day.

Furthermore, dividend aristocrats are usually companies with durable competitive advantages. This is because dividends come from a company’s profits. Borrowing money to fund dividend payments may work for a while, but in the long run, dividend-paying companies need to be able to generate recurring profits.

Having a competitive advantage can make a company profitable. However, if the company is making money in its business, people will notice. Soon the company will find competitors entering the market. So if the first company doesn’t have durable competitive advantage, chances are increasing competition will drive up the supply and negatively impact its market power and profits.

This is one of the reasons why companies rise and fall. It’s also a reason why many companies don’t pay dividends. If the company can’t be sure about the condition of its business a few years down the road, it will likely think twice before starting to pay a dividend. In today’s market, starting a dividend and then cutting it can result in major investor disappointment.

What this also means is that for a company to not only pay a dividend, but also increase it for 25 years, there must be some sort of economic moat guarding its revenue and profits. Durable competitive advantage is where that moat comes from.

Income investing and growth investing are two of the most widely used stock market investment strategies. But the two strategies don’t have to be mutually exclusive. Think about it; without growth in a company’s business, how can it afford to raise its dividend year after year?

That’s why dividend aristocrats have not only been rock-solid income investments, but also lucrative growth investments. As a matter of fact, they have managed to beat the broader S&P 500 Index. 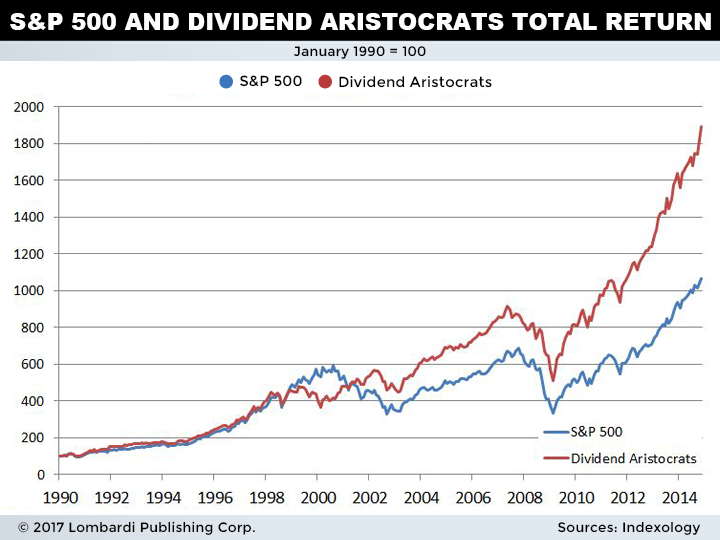 The S&P 500 Index has long been regarded as the benchmark index for large-cap U.S. equities. Because it represented a significant portion of total market value, it is also widely used as a preferred index for all U.S. stocks. The chart above shows that the S&P 500 Index has delivered enormous returns since 1990.

As the chart above shows, the S&P 500 Dividend Aristocrats Index has substantially outperformed the S&P 500 Index since 1990. This might seem a bit counterintuitive at first glance. Dividend aristocrats are well established, and sometimes mega-cap companies. Shouldn’t smaller companies grow faster than the bigger ones?

The thing is, though, even though dividend aristocrats are often big companies, their ability to consistently grow their payout every year makes them special. Like I said earlier, in the long run, dividends come from profits. For a company to become a dividend aristocrat, it will likely need a consistently growing underlying business, which is exactly what stock market investors want to own. Sure, smaller companies might be growing faster, but not all of them can keep that growth rate for a few decades. This is why despite their size, dividend aristocrats have always had a large following among stock market investors. And since there is always a demand for them, their share prices have been climbing at an impressive pace.

It’s just like what Benjamin Graham—Warren Buffett’s mentor—once said, “In the short run, the market is a voting machine, but in the long run, it is a weighing machine.” If a company keeps growing its business and raising its dividend, investors will notice it eventually.

Who Are the Dividend Aristocrats?

Components in the dividend aristocrats list don’t always stay the same. Based on what companies do with their dividends, companies get added to or removed from the list from time to time. For instance, earlier this year, Federal Realty Investment Trust (NYSE:FRT) and General Dynamics Corporation (NYSE:GD) were added to the dividend aristocrats list, while HCP, Inc. (NYSE:HCP) was removed.

Right now, there are 51 dividend aristocrats coming from a number of different sectors. The three largest sectors are consumer staples (25.4%), industrials (17.5%), and healthcare (14.6%). Known for their stability, these sectors have produced many dividend aristocrats’ historical constituents.

Here are the 51 companies in the current dividend aristocrats list.

If an investor wants to have exposure to all dividend aristocrats, buying individual companies might be a costly process. Purchasing shares of all 51 companies on the list would require entering 51 buy orders. With the brokerage charging a commission for each transaction, the cost can quickly add up for the investor.

The final thing to note is that dividend aristocrats shouldn’t be the only focus for income investors. The dividend aristocrats definition is dividend increases of 25 years or more. But if a company doesn’t have such a long payout increase history, it doesn’t mean it’s not as good. There are companies that have built solid businesses and are just starting to reward shareholders with dividends. These companies deserve investors’ attention, too.