Did you know that legendary investor Warren Buffett is also a big fan of dividend stocks? While we don’t hear him talking about dividends that often, here’s a fact: all 10 of Buffett’s company’s top 10 holdings by market value were dividend-paying companies as of June 30.

That’s why, if you’re looking to earn an income from stocks, Buffett can be one of the best investors to learn from. And since his company Berkshire Hathaway Inc. (NYSE:BRK.B) is required by the U.S. Securities and Exchange Commission (SEC) to disclose its holdings on a quarterly basis, it’s very easy for us to see what the “Oracle of Omaha” is up to.

This is the second part of a series titled Piggyback on Warren Buffett’s Portfolio, in which I discuss some of the themes and recent moves of the legendary investor, with an emphasis on income generation. The first part of the series was on bank stocks. This time I’m going to talk about something that is very appropriate for the current market environment: consumer staples.

If you’ve been following the news, you will likely have noticed that there’s a lot of uncertainty in the markets right now. An unexpected headline on trade negotiations or geopolitical tensions could lead to big swings in U.S. equities.

That’s why, for the past several months, investors seemed to be moving away from the more risky and volatile sectors. If you’re a risk-averse income investor, you’ll want to find a safe haven too.

Because people are unwilling to cut these products out of their budgets even when the going gets tough, companies that make these products are essentially running recession-proof businesses. Meanwhile, some consumer staples companies are well established and have the ability to pay dividends on a regular basis. Therefore, if you want to earn recession-proof dividends, the consumer staples segment deserves a serious look.

It’s no secret that Buffett has a special fondness for Coca Cola products. The billionaire investor once said that he consumes about 700 calories of Coke a day, and that he is “about one-quarter Coca-Cola.” (Source: “Buffett defends Berkshire’s big Coke stake,” CNBC, May 2, 2016.)

Therefore, Buffet’s liking of Coca Cola stock shouldn’t come as a surprise. The Oracle of Omaha started buying KO stock in the late 1980s. And as you can see from the chart below, Buffett’s investment in the beverage company has produced astronomical returns. 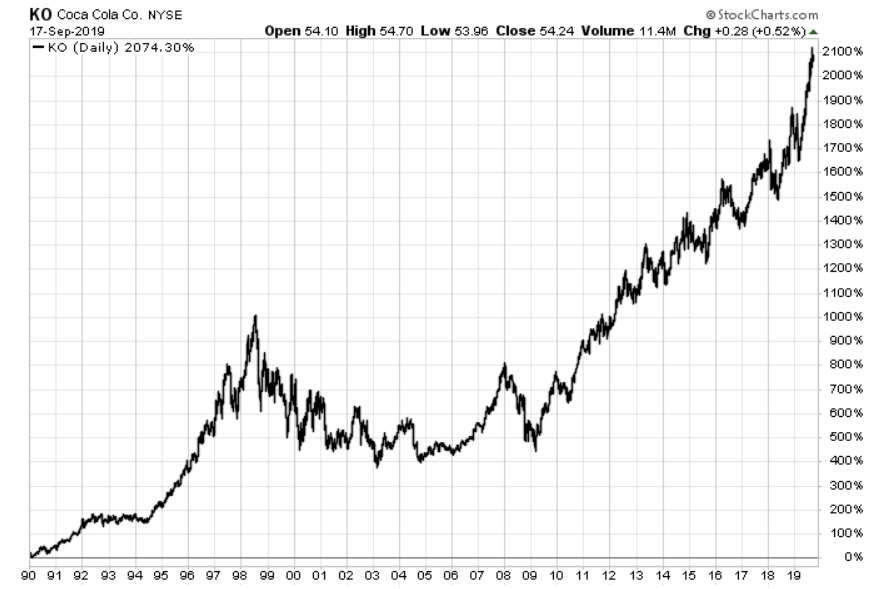 As you’d expect, the value of Buffett’s investment in Coca-Cola stock has grown tremendously over the decades.

According to Berkshire Hathaway Inc.’s latest 13-F filing to the SEC, Buffett’s company-owned 400 million shares of KO stock as of June 30. The market value of those shares at the time of the report was $21.7 billion, making Coca-Cola Co the third-largest holding in Warren Buffett’s portfolio. (Source: “Form 13F Information Table,” United States Securities and Exchange Commission, last accessed September 20, 2019.)

Note that Coca-Cola has been around for over 100 years, and has built a huge presence in the beverage market. The company offers over 500 brands and sells its products in more than 200 countries and territories. Many of its brands, such as “Coca-Cola,” “Dasani,” “Minute Maid,” and “Sprite,” are household names. (Source: “Investor Overview,” Coca-Cola Co, last accessed September 20, 2019.)

With such an established business, the company is well-positioned to pay recurring dividends. Coca-Cola Co has been a go-to choice of income investors for decades. This is because the company pays, not just a stable dividend, but an increasing one.

Don’t forget, because most consumers can afford a can of Coke even during an economic downturn, Coca-Cola Co is a classic example of a recession-proof business. For investors who want to collect recession-proof dividends, this Warren Buffett stock could be worth considering.

Another consumer staples giant of which Buffett owns a lot of shares is Kraft Heinz Co (NASDAQ:KHC). Again, this shouldn’t come as a surprise. The billionaire investor once said he eats like a six-year-old. (Source: “Warren Buffett’s Secret to Staying Young: ‘I Eat Like a Six-year-old.’” Fortune, February 25, 2015.)

On a more serious note, Berkshire Hathaway was a backer of the merger between Kraft Foods and Heinz. The merger created the current Kraft Heinz Co, which has a portfolio of popular food brands like “Kraft,” “Heinz,” “Philadelphia,” “Jell-O,” and “Kool-Aid.”

While this business looks quite durable (consumers tend to keep buying Heinz ketchup and Kraft macaroni even when times get tough), KHC stock’s dividend history is less than stellar.

Management said that the dividend reduction would improve Kraft Heinz’s balance sheet, support commercial investments, and bring the payout level to a point that “can grow over time and accommodate additional divestitures.”

Nobody likes dividend cuts. Since that announcement (Kraft Heinz reported earnings the same day), KHC stock has plunged more than 40%, a massive drop for a blue-chip company commanding $34.3 billion of market capitalization.

Due to the inverse relationship between a company’s dividend yield and share price, the tumble in KHC stock means it can still offer an oversized yield despite a dividend cut.

In other words, this beaten-down dividend stock offers a yield that’s nearly three times as high as the benchmark’s average.

At the end of June, Berkshire owned 325.6 million shares of Kraft Heinz stock. The stake is worth approximately $9.2 billion at the current market price. (Source: United States Securities and Exchange Commission, op. cit.)

Procter & Gamble Co (NYSE:PG) is bigger than Coca-Cola and Kraft Heinz combined in terms of market capitalization. But compared to the other two companies, P&G represents a much smaller holding in Warren Buffett’s portfolio. As of June 30, Berkshire owned 315,400 shares of Procter & Gamble Co, at a market value of around $38.3 million. (Source: United States Securities and Exchange Commission, op. cit.)

Still, P&G is one of my favorite dividend plays from the consumer staples sector. I featured PG stock in my Income for Life advisory in November 2016. Assuming automatic dividend reinvestment, Procter & Gamble stock has produced a total return of 61.4% since then.

The reason I liked Procter & Gamble Co in 2016, and why I still like it, is the company’s ability to return an increasing amount of cash to investors. Just like Coca-Cola, Procter & Gamble is one of the 27 stocks with the Dividend King title.

P&G has been paying uninterrupted dividends since its incorporation in 1890, and has raised its payout in each of the last 63 years. (Source: “Splits & Dividend History,” Procter & Gamble Co, last accessed September 20, 2019.)

The best part is, despite being around for well over a century, the company’s business is still growing.

The bottom-line number was even more impressive. Excluding special items, Procter & Gamble’s core earnings came in at $1.10 per share in the fourth fiscal quarter, marking a 17% improvement from a year ago. On a currency-neutral basis, PG stock’s core earnings per share (EPS) increased 26% year-over-year.

Note that Procter & Gamble’s core EPS easily covered its cash dividend of $0.75 per share declared and paid during the quarter.

The company is not done with its growth story. For fiscal 2020, management expects all-in sales growth of three to four percent. At the same time, Procter & Gamble’s core EPS are projected to improve by four to nine percent from its fiscal-2019 number.

Don’t forget, Procter & Gamble makes products that are always on people’s shopping lists. Its household brand names include “Tide,” “Bounty,” “Oral-B,” “Downy,” and “Gillette.” As one of the most established consumer staples companies in the world, P&G is well-positioned to keep rewarding income investors.