Why Microsoft Corporation Stock (MSFT) Could Be a Long-Term Winner

Tech companies are not usually known for being great dividend plays, but income investors should make an exception for Microsoft Corporation (NASDAQ:MSFT) stock.

The tech sector is probably the fastest-changing place in the stock market, and one consequence of that is companies don’t really have much incentive to pay a dividend. They need to invest to keep their lead and industry trends can change rapidly; if investors start paying dividends today, who knows if they can sustain that dividend in the future?

But for Microsoft, it’s a different story. The company has been around for over four decades, and while it wasn’t always smooth sailing for the “Windows” maker, it had reached a point where it can start rewarding income investors. Since 2004, Microsoft stock’s quarterly dividend rate has increased by 387.5%. Right now, the company pays a quarterly dividend of $0.39 per share, translating to an annual dividend yield of 2.63%. (Source: “Dividends and Stock History,” Microsoft Corporation, last accessed November 3, 2016.)

Of course, some will say that Microsoft’s products are not the best. And if another company comes up with a better alternative to the Windows operating system and “Office” productivity suite, Microsoft stock could be in trouble.

The keywords here are “high switching cost.” The high switching cost made sure that once Microsoft got a “first mover” advantage in this business, it could turn that advantage into a very wide economic moat, protecting its profits from competitors. And that’s exactly why Microsoft is undeniably the most dominant player in the desktop/laptop operating system marketplace to this day. 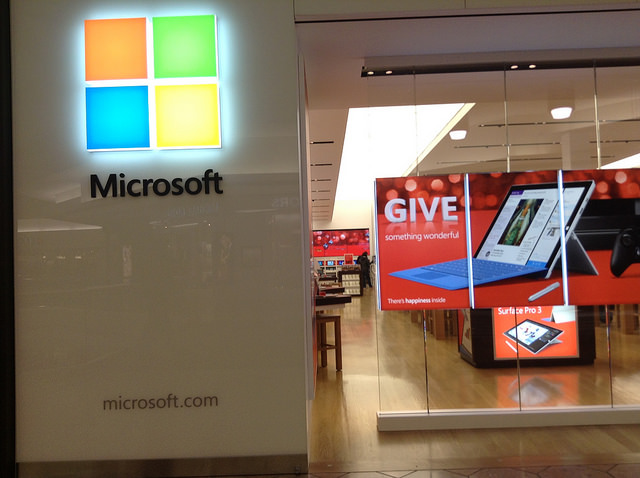 While Windows and Office are nothing new, the company’s new way of delivering those products is a great thing for dividend investors. When you get the latest version of Windows or Office, the products don’t necessarily come in a box, and you don’t need a CD-ROM to install it. Instead, everything can be delivered through the cloud.

What’s more is that instead of paying a one-time fee to get the products, users are now subscribers to “Office 365.” This provides a recurring source of revenue for Microsoft.

At the same time, offering subscription-based services also helps the company get a better understanding of its users. In today’s Internet industry, companies are fighting for users, so it’s certainty a good thing that Microsoft has gotten tens of millions of subscribers on its ecosystem just from Office 365 subscriptions alone. (Source: “Earnings Release FY17 Q1,” Microsoft Corporation, October 20, 2016.)

Despite being on the market for over five years, Office 365 is still a growth driver at Microsoft. In the most recent quarter, Office 365 commercial revenue grew a whopping 51% year-over-year. Monthly active users of Office 365’s commercial version have surpassed 85 million, while Office 365 consumer subscribers have increased by 24 million. (Source: “MSFT Earnings Conference Call,” Microsoft Corporation, October 20, 2016.)

Continued success of Office 365 is a proof why MSFT stock could be a great dividend play. Software and services—Microsoft’s main business—don’t have to follow the same product update cycle as hardware products, plus a lot of their revenue could be recurring.

The idea is that despite being in the tech sector, Microsoft offers things that all computer users need: operating systems and productivity software. This means that while not being a consumer staples company, Microsoft could still be resilient. People might not be buying new cars when times are hard, but as long as they still use computers, Microsoft can continue making money from its core products. And that should be reassuring for dividend investors that have MSFT stock in their portfolios.