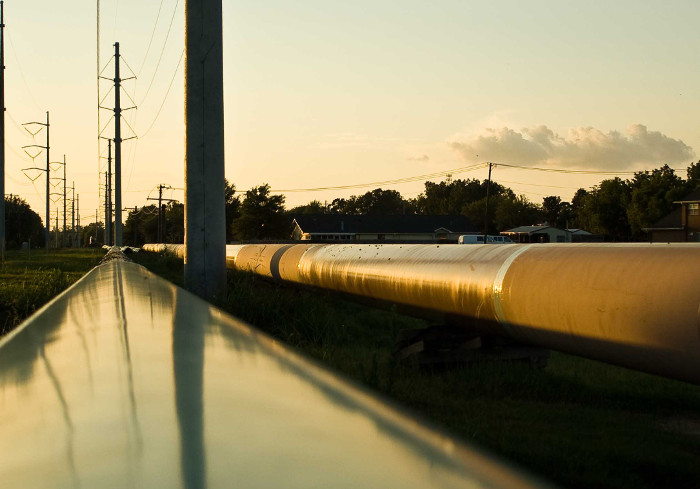 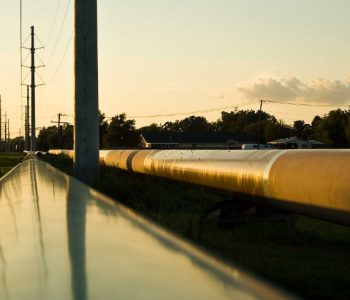 While I don’t gush over oil drilling stocks, you can chalk me up as a fan of one lesser-known pipeline owners like Magellan Midstream Partners, L.P. (NYSE:MMP).

In the same way the biggest profits of a gold rush went to the people selling picks and shovels and not the prospectors, the biggest profits of the energy business go to the folks moving oil, gas, and other products, and not to the ones drilling wells. The chocolate on your strawberries, loopholes in the tax code have turned these businesses into some of the most lucrative dividend stocks around.

Magellan tops this list. The partnership owns a collection of fee-based pipelines and storage terminals across the Midwest, acting like the toll road of the energy industry. Investors prize these assets for their steady cash flows, high returns on equity, and oversized dividend yields.

The “Midstream” in Magellan’s name denotes the position it holds in the industry. Analysts divide the oil patch into three groups: upstream (drilling), midstream (shipping and processing), and downstream (refining and retail).

Like the name implies, Magellan sits in the middle of this process. The partnership owns one of the biggest pipeline networks for refined products in the United States, shipping commodities like gasoline, diesel, and jet fuel. In recent years, executives have also created an impressive crude business, building out over 2,200 miles of oil pipelines across south Texas. MMP’s massive system also includes five marine ports, dozens of pipeline terminals, and storage facilities that hold roughly 26-million barrels of product.

You don’t need a Ph.D. to appreciate such a pipeline operation. A steel-and-concrete tube buried underground, usually about 30 inches in diameter, which delivers oil and other energy products from Point A to Point B. As anyone who watches the news can tell you, building a new route can be a huge headache. But once you have one up and going, there might be no better business in the world–especially if you like earning steady dividend income.

Each day, Magellan has space to ship millions of barrels of energy products. And because the industry has such a shortage of energy infrastructure, these lines almost always run at full capacity. That situation probably won’t change anytime soon, given the booming production out of U.S. shale fields like the Permian Basin and the Eagle Ford shale formation. With so many barrels and not enough pipe to move it, Magellan’s business will be likely crank out maximum profits for decades to come.

Better yet, these cash flows resemble bond coupons. Magellan simply earns a fee for every barrel of oil it moves, so wild swings in energy prices have almost no impact on earnings. And while this network cost billions to build, it’s not that costly to keep up and running. Management spends only a small percentage of revenues on maintenance, leaving a lot of funds left over for buying new assets or just paying out dividends to shareholders.

The best part, though? Little competition. Once you have a pipeline in place, no other method of transportation, such as trucks and rail cars, can move barrels as cheaply. The only way to complete against Magellan would be to build another set of pipelines right next to theirs. This, however, would only split the existing business between the two routes, greatly diminishing the profits for everybody.

But even if this didn’t deter you, chances are you couldn’t build a rival business. The price tag to build your own pipeline will easily top $1.0 billion, keeping all but the deepest pockets out of the industry. Harder still, local governments and landowners don’t exactly jump for joy at the news of new pipelines built on their property. Get ready for a long fight to secure the needed construction right-of-ways, especially in today’s political climate.

This leaves owners with existing pipelines with monopoly-like power. In the case of Magellan, the partnership often owns the only line to the markets it serves. Management can raise fees along its lines every year, and customers have little choice but to pay up.

You can see the power of this business in the company’s financial results. Even though the financial crisis of 2008 and 2009, Magellan managed to raise its distribution to unitholders. In fact, since going public in 2001, the partnership’s payout has grown by 590%. 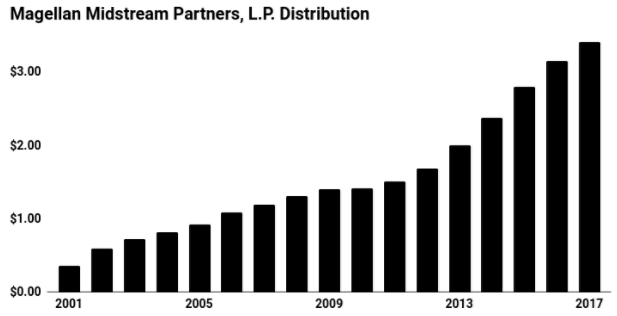 Here’s where it gets interesting: anyone who bought units back when Magellan first went public is now collecting a 47.6% yield on their original investment. If they had reinvested their distributions, that yield on cost jumps to 117%.

Bottom line: A well-chosen pipeline can serve income investors well over time. And even though unit prices have soared over the past few years, owners like Magellan still have a lot of room for expansion. Generally, traders have ignored this quite niche for the more exciting drilling stocks upstream. But with yields beginning at five percent, I’d take a boring over an oil producer any day of the week.