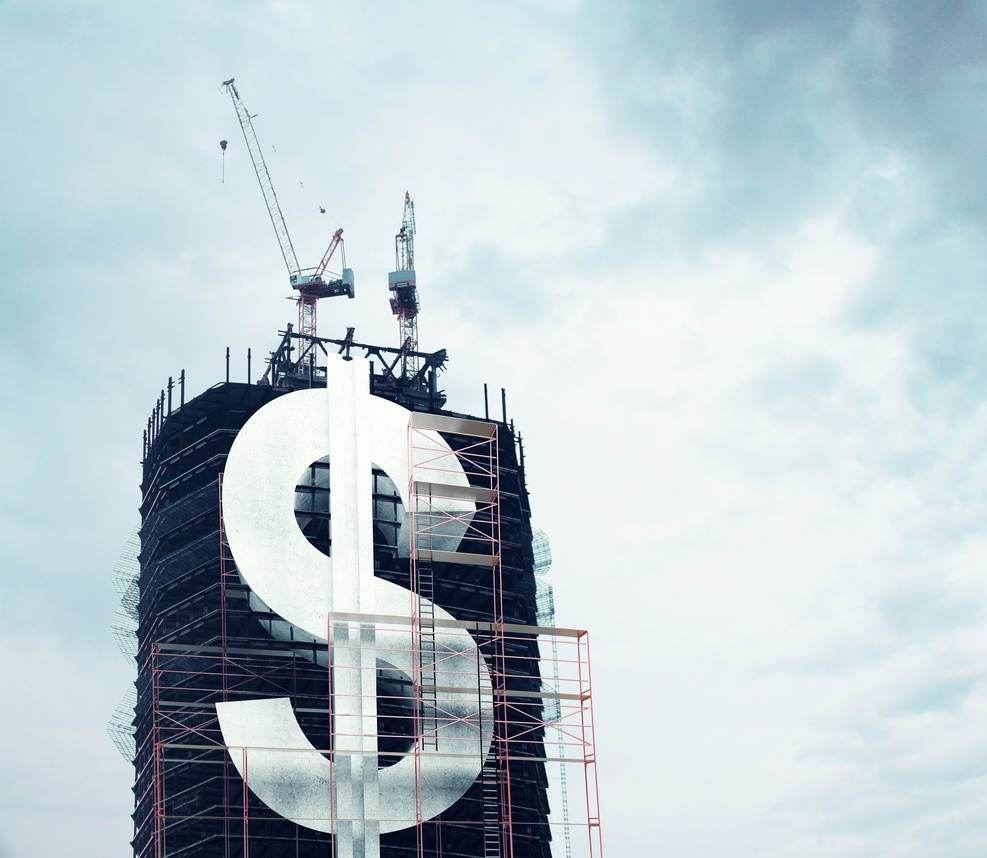 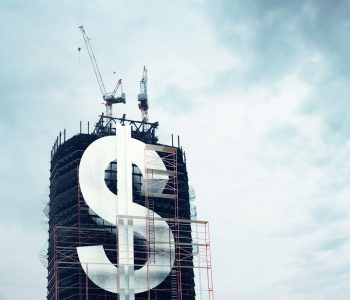 Far too often, income investors become attracted to a stock simply because it has a high dividend yield. But, as I always like to tell our readers, a high dividend yield is only as good as the business model behind it. Because, without a healthy business to support an outsized dividend payout, the prospects of a devastating dividend cut, or even an elimination of the dividend altogether, is always high.

That’s why our team here at Income Investors is constantly on the hunt for dividend stocks that have sustainable high yields. I like to call these stocks “high-cushion high yielders.” What are they, exactly? Well, a high-cushion high yielder is a stock that 1) boasts a dividend yield above 7.5%, 2) generates big cash flow in order to support its big dividend, and 3) has a business model that is relatively immune to technological advances.

Well, I believe I’ve found a stock that checks off all of those boxes: Whitestone REIT (NYSE:WSR). Let’s take a closer look.

If you aren’t familiar with Whitestone, it is a commercial real estate investment trust (REIT) engaged in owning and operating commercial retail properties.

So, if you were ever concerned about investing in retail right now because of the huge digital threat known as Amazon.com, Inc. (NASDAQ:AMZN), Whitestone might give you a lower-risk entry into the space. 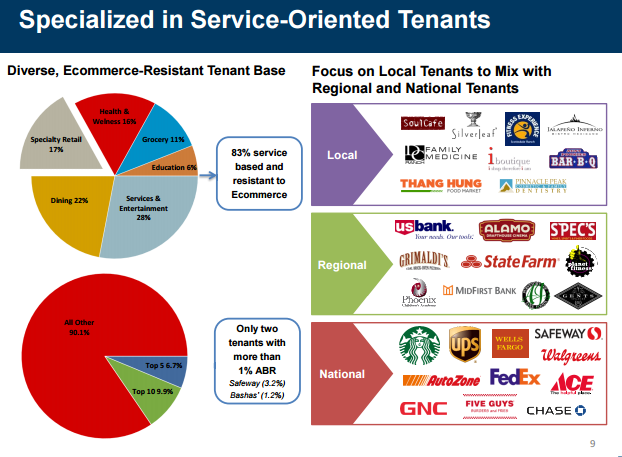 Another way Whitestone differentiates itself is by concentrating its properties within high-growth cities. See, the company’s properties cover approximately 4.4 million square feet in Phoenix, Austin, Dallas-Fort Worth, Houston, and San Antonio.

These areas are among the fastest-growing centers in the United States, with average population growth of about 20% over the past few years. 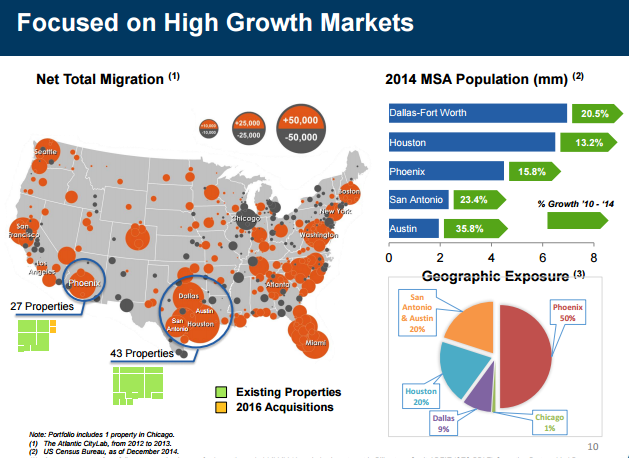 Judging from the company’s most recent quarter, management is performing well on all those counts.

So, what drove the strong results? Well, in addition to the company’s base rent increasing by 16%, property operating expenses came down during the quarter. These gained efficiencies reflect the company’s highly scalable business model. Furthermore, occupancy during the quarter increased 200 basis points from the year-ago period to 89.7%.

As of the end of Q4, the company’s diversified tenant base is comprised of 1,224 tenants. More importantly, Whitestone’s largest tenant still only accounts for 3.6% of its rental revenue.

So, not only is the company’s portfolio performing nicely, but management is also doing well to manage the company’s risk exposures.

“In 2016 our team executed on our strategy to produce sustained operating results as we leveraged our ‘Ecommerce-resistant’ business model through the successful redevelopment and acquisition of properties in our targeted high growth markets,” said Chief Executive Officer Jim Mastandrea.

“Furthermore, both the fourth quarter and full year were marked by significant improvement in our same store growth, NOI and in our operating portfolio occupancy.” (Source: Ibid.)

Of course, a differentiated business model and strong top-line growth is meaningless to us income investors if they don’t translate into robust cash flow. Luckily for Whitestone REIT shareholders, they absolutely do.

When it comes to REITs, dividends come from the company’s funds from operations (FFO). In 2016, Whitestone generated core FFO of $39.4 million. Meanwhile, the company’s 2016 dividend payout clocked in at $32.6 million. That represents a trailing 12-month coverage ratio of 120%, suggesting that the company’s current level of dividends remains nicely supported.

In fact, Whitestone’s core FFO and dividend have grown at a rate of 296% and 172%, respectively, over just the past five years.

Given the strong household and income growth expected in Whitestone’s geographic centers over the next five years, I can’t see the dividend slowing anytime soon. 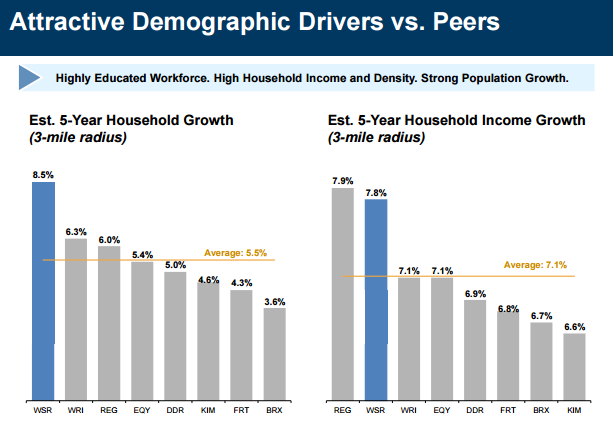 “With our laser focus on neighborhood centers located on the best retail corners of affluent communities with favorable demographics, combined with our improving capital structure to support future growth, Whitestone is poised to drive additional and sustained shareholder value,” said Mastandrea. (Source: Ibid.)

That brings us back to Whitestone REIT’s strong stock price, which is up about nine percent over the past month alone. But, given the company’s demographic tailwinds and comfortably covered dividend, it’s tough to question Wall Street’s bullish view.

The good news is that, with a dividend yield of eight percent, Whitestone still offers a mouth-watering income opportunity. After all, Whitestone’s dividend yield is still much higher than larger retail REITs like Kimco Realty Corp (NYSE:KIM) (4.8%), Realty Income Corp (NYSE:O) (4.1%), and Macerich Co (NYSE:MAC) (4.4%).

The Bottom Line On Whitestone REIT

There you have it, my fellow Income Investors: a few good reasons to consider adding Whitestone REIT to your income portfolio.

As is always the case, don’t view this article as a formal recommendation. Instead, take it as a starting point for further due diligence. Although Whitestone’s eight-percent dividend yield seems very stable right now, it’s crucial that investors keep monitoring things like the company’s lease renewals, occupancy rates, and financial position to ensure that it stays that way.

As of this moment, though, Whitestone REIT easily represents an outsized income opportunity.