Milk This “Cash Cow” for Yield

You may have heard the phrase “cash cows” before, and for good reason; as a group, these stocks represent some of the most lucrative opportunities we’ve ever stumbled across.

Put simply, cash cows constitute mature firms that can be “milked” for ongoing dividends. You often find them in industries like cereal, pipelines, and cigarettes. Because they have less in the way of growth potential, these companies don’t need to invest much in new plants or equipment. As a result, they pay out most of their profits to shareholders. You often find names sporting yields as high as 12%.

It may sound strange to look for companies that can’t expand. Investors, after all, tend to focus on exciting growth stories. But we don’t want growth; we want income.

And while new projects make headlines, they often fail to live up to investors’ expectations. For that reason, stocks that pay out most of their earnings to shareholders as dividends deliver the best returns over the long haul.

Today, however, the casino resort operator doesn’t have many growth opportunities in front of it. And that’s okay. Shares have quietly become a cash flow machine, spitting out dividends to shareholders. The company has spent years building a gaming empire. Now it’s time for investors to kick back and cash in on all of that hard work.

Las Vegas Sands is a pretty simple business to wrap your head around. The company owns three casinos across the country: The Venetian, The Palazzo, and Sands Bethlehem. On each dollar gamblers wager, management expects to pay out only $0.95 in winnings. The remainder represents the company’s profit. Las Vegas Sands lines its pockets further through other streams of income, such as retail, restaurants, and hotel bookings.

Yet, despite having “Las Vegas” in the company’s name, “Sin City” only represents a fraction of total revenues. Over the years, executives have built a thriving business overseas.

In Macao, a special administrative zone in southeastern China, the firm owns five properties (The Venetian Macao, Sands Macao, The Plaza Macao, Sands Cotai Central, and The Parisian Macao). In 2010, management opened the most expensive standalone casino in the world, the Marina Bay Sands resort in Singapore. Combined, these businesses account for nearly 90% of Las Vegas Sands’ operating cash flow.

Why are these businesses so profitable? The company owns one of only six casino licenses in Macao and one of only two in Singapore. This effectively prevents any new competitors from opening up shop right next door and taking away customers. As a result, Las Vegas Sands can raise prices year after year without the worry of rivals eating into its margins. (Source: “Our Properties,” Las Vegas Sands Corp., last accessed February 26, 2019.)

You can see this competitive advantage show up in the firm’s financial statements. Over the past decade, Las Vegas Sands Corp. has earned $0.21 in profit annually on each dollar of capital invested into the business.

I see companies earn gains like these from year to year. But over time, competition tends to grind those margins down. When you see a business sustain such high returns over such a long period, you know you have something special.

Las Vegas Sands Corp. operated in growth mode for quite some time. Between 1988 and 2016, the company completed 11 properties. Throughout that period, management spent most of their time planning or building new resorts. But today, Las Vegas Sands doesn’t have many new opportunities on the horizon. The company has entered the next phase of its life cycle where it may not grow at all.

Analysts, therefore, need to watch a different set of performance metrics. In the old days, we paid most of our attention to revenue growth. Now our focus should shift to cash flow generation and ultimately how much money gets paid out to shareholders.

From this total, management expects to spend about $500.0 million each year on maintenance capital expenditures. So this leaves about $4.4 billion in excess cash flow annually. That presents a tremendous amount of money to fund dividends and stock buybacks.

So shareholders shouldn’t expect the same robust capital gains witnessed in previous decades. Instead, investors can look forward to a more stable stock and growing dividends. That is something to be cheered, as odd as it might sound.

What Happens in Vegas…Pays a 5% Yield

In fact, Adelson has admitted on several occasions that the discussion of distributions to investors makes for his favorite part of the investors’ conference call. He often opens that part of the presentation with a trademark “yay dividends and yay buybacks.” (Source: “Las Vegas Sands (LVS) Q2 2017 Results – Earnings Call Transcript,” Seeking Alpha, July 26, 2017.)

Last quarter, management boosted the quarterly dividend three percent to $0.77 per share. At today’s prices, this comes out to an annual year of 5.1%. Given that this distribution accounts for only 60% of EBITDA, Las Vegas Sands this has ample cash left over for other purposes—like stock buybacks, which have picked up in recent years. 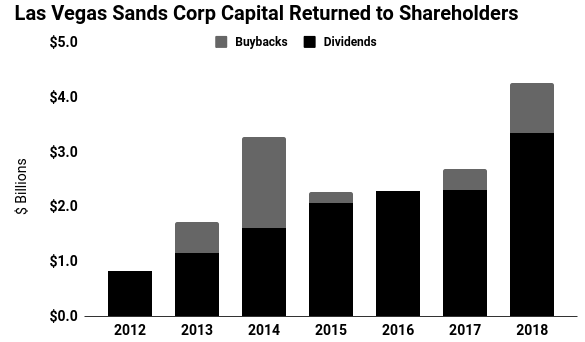 These buybacks amount to a kind of “stealth” dividend. Think of the total value of a company like a pizza divided up into slices. When companies conduct buybacks, they reduce the total number of slices. So as a result, the remaining slices now represent a bigger percentage of the pizza that remains. We get a bigger piece of any future gaming revenues. So in essence, buybacks allow shareholders to grow their stake in a wonderful business tax-free.

Management has demonstrated a proven commitment to rewarding shareholders. Therefore, it’s reasonable to expect the company will boost the dividend or buyback program as the cash keeps rolling in. Over the next five years, analysts project earnings will grow at a mid-single-digit annual clip. Investors can expect their payments to grow more or less in line with profits.

Know When to Fold ‘Em

With almost a literal license to print money, I see three big risks for Las Vegas Sands: a business slowdown in Asia, issues with permit renewal, and new competition entering the market.

Gambling revenues are particularly sensitive to conditions in financial markets and the broader economy. We saw that play out in the first half of 2009 when the financial crisis resulted in a 20% dip in Asian gaming revenues. More recently, the Chinese government’s crackdown on corruption and money laundering have also hammered casino revenues. Another slowdown, perhaps one courtesy of President Trump’s trade war, could clip profits again.

The other risks look more remote. In international markets, investors always have to worry about getting their property stolen from them at gunpoint. The Chinese government could revoke Las Vegas Sands’ gaming licenses or confiscate their casinos completely. Though given the lucrative partnership between officials and the company, that outcome looks unlikely.

New competition represents a much bigger threat. If China, Singapore, or other countries were to issue more gaming permits, it would bite into Las Vegas Sands’ revenues.

That said, most governments in the area want to rein in growth. Limited available land will also prevent much in the way of new construction. Still, these are risks worth keeping an eye on.

Las Vegas Sands Corp. represents a textbook example of a cash cow business: A mature operation with limited growth opportunities that can milk existing operations for outsized dividends. The company poured billions of dollars into its business over the past few decades. Now it’s time for investors to kick up their feet and enjoy the fruits of those labors.