https://www.incomeinvestors.com/kimberly-clark-corp-kmb-stock-best-dividend-stocks-2019/51576/ "This Is Like Buying Coca-Cola in 1950" Robert Baillieul, B.Comm. Income Investors 2019-08-14T07:03:51Z 2019-08-22 12:20:34 Kimberly Clark Corp NYSE:KMB Kimberly Clark stock KMB stock best dividend stocks Kimberly Clark Corporation (NYSE:KMB) could be one of the best dividend stocks for 2019 and beyond. Here's everything you need to know about KMB stock. Kimberly Clark Stock https://www.incomeinvestors.com/wp-content/uploads/2019/08/Kimberly-Clark-Corp-Is-KMB-Stock-One-of-the-Best-Dividend-Stocks-for-2019-150x150.jpg 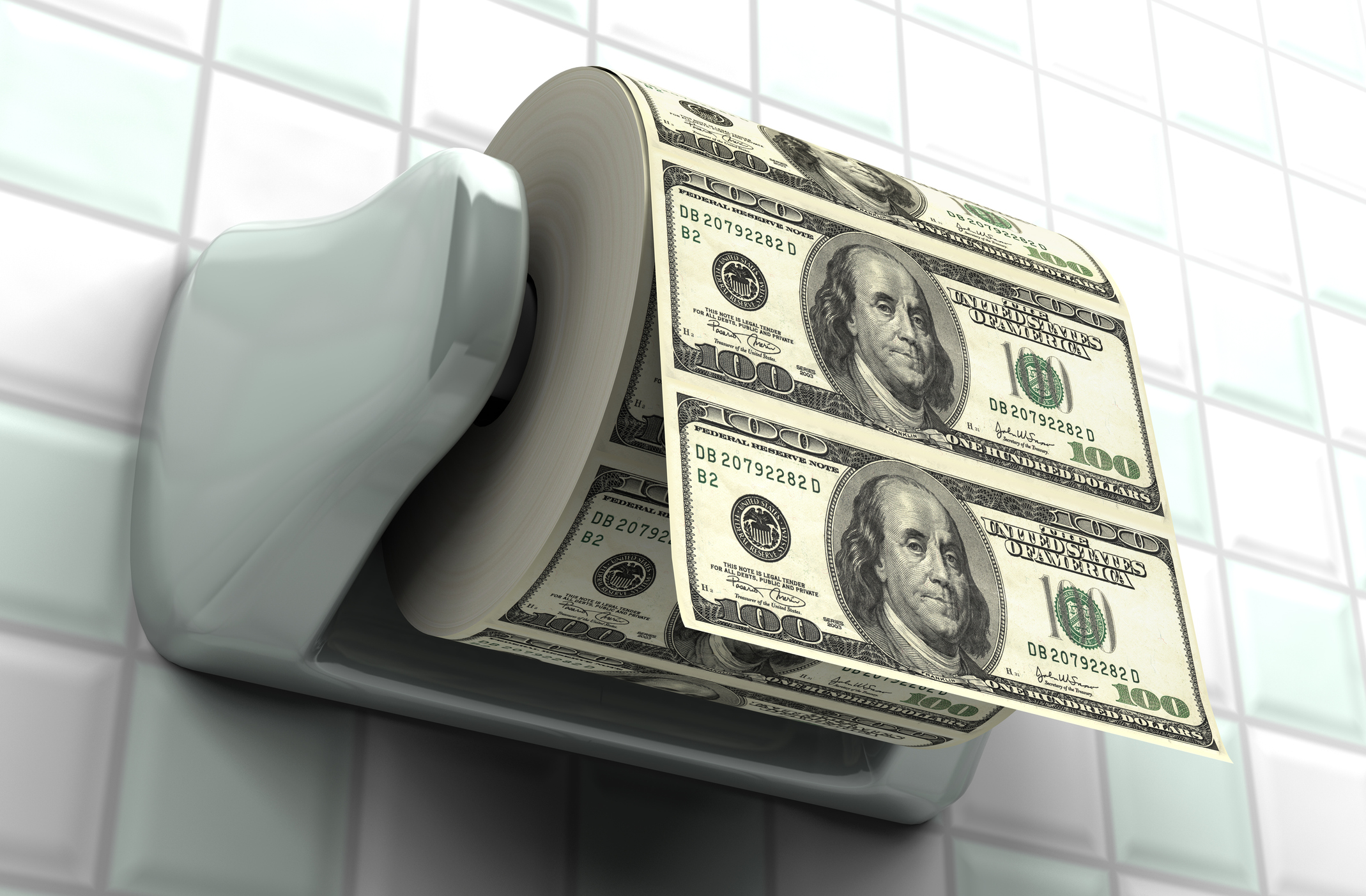 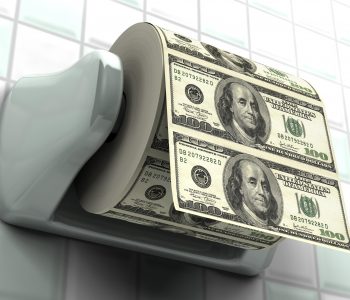 You Can Find the Best Dividend Stocks Here

If you scan the scorecard of our paid newsletters, you might spot a common theme: the best dividend stocks often represent high-quality companies banking on big investment trends.

You can see this with senior housing provider Welltower Inc (NYSE:WELL) cashing in on an aging population; pipeline giant TC Energy Corporation, a key player in America’s shale revolution; and data-storage trust CoreSite Realty Corp (NYSE:COR), the “landlord of the Internet.” All of these stocks can pay out lucrative distributions to shareholders because they cater to large, growing markets.

Today I bring you another striking example in Kimberly Clark Corp (NYSE:KMB). The consumer product maker has carved out an enviable position in a number of emerging countries. Much like some other top stocks, such as Nike Inc (NYSE:NKE) and Grupo Aeroportuario del Pacífico (NYSE:PAC), this company could make a fortune from a growing middle class in these nations.

And that could create a fortune for shareholders too.

I’ll bet dollars to donuts that you have some Kimberly Clark products in your house right now. Over the past few decades, the company has assembled a portfolio of impressive consumer brands, including “Huggies” diapers, “Kleenex” facial tissues, “Scott” paper towels, and “Kotex” feminine hygiene products. By selling simple, essential products, the company’s profits have rolled in like clockwork year after year.

Kimberly Clark’s success comes from its “intangible assets,” analyst lingo for brand strength. The company has spent decades building a relationship with customers, allowing management to charge a premium for their wares.

This competitive advantage is built through the company’s relationship with retailers. Stores don’t want to risk sales on unproven products or costly out-of-stock situations, but when you pack your shelves with Kimberly Clark brands, you know that inventory will move. For this reason, Kimberly Clark often hogs all of the best shelf space, kicking its rivals to the sidelines.

You can see this competitive advantage show up in the company’s financials. Last quarter, management raised prices five percent in North America to pass on higher commodity costs. Yet despite the sticker shock, there was no reported dip in sales volume. This boosted Kimberly Clark’s gross margins 70 basis points to 32%—exactly the type of performance we expect from wonderful businesses.

And what will Kimberly Clark do with this extra money? What it has always done: give most of it back to shareholders. KMB stock has paid an annual dividend to investors since 1934 and boosted its distribution for 47 consecutive years.

Even though the last financial crisis, executives continued to mail out checks without even a hiccup in these payments. That type of track record has earned the company the prestigious title of “Dividend Aristocrat,” an elite group of S&P 500 firms that have boosted their payout for at least 25 straight years.

Cash is also returned to shareholders through share buybacks, a program that many investors underappreciate. Over the past five years, Kimberly Clark has spent $5.3 billion on stock repurchases, slashing the total number of outstanding shares by almost 13%. For long-term stockholders, the program increases their claim to future profits and boosts the value of each remaining share.

Thanks to this formula, Kimberly Clark stock has emerged as one of the best dividend stocks over the past few decades. While the company conquered Europe, Japan, and North America, KMB shares have delivered a total return, including dividends, of 12,300%.

That crushes the gains that investors earned in the broader S&P 500—with much less risk. Yet despite such an impressive run, this could just be the beginning.

The opportunity over the next three decades, however, could lie further abroad. Since the end of the Great Recession, the economies of Japan and western Europe have slowed to a crawl. The U.S. has only done slightly better, with output increasing by about two percent per year. But while those growth rates appear to be the “new normal” in the developed world, emerging economies in eastern Europe, southeast Asia, and Latin America continue to grow at rates of five percent or more.

The source of this growth comes from the embrace of capitalism around the world. Each year, 160 million people escape poverty and enter the global middle class, which the World Bank defines as anyone with an income between $11.00 and $110.00 per day. (Source: “The Unprecedented Expansion Of The Global Middle Class: An Update,” The Brookings Institute, last accessed August 12, 2019.)

As large blocks of emerging-market populations move from slums to suburbs, they develop more sophisticated tastes. That has created opportunities for companies in everything from food and retail to banking and transportation.

Imagine for a moment investing in stocks like Whirlpool Corporation (NYSE:WHR), The Coca-Cola Co (NYSE:KO), or Procter & Gamble Co (NYSE:PG) in the 1950s. These companies made fortunes for their shareholders as millions of Americans transitioned into the middle class.

Today we have the same opportunity in emerging countries like China, India, Turkey, Brazil, and Mexico, just to name a handful. In fact, the same consumer product companies will likely benefit from this boom. But because of sheer population numbers, the size of this opportunity could far exceed anything we’ve seen in the past.

Kimberly Clark sees the same potential. In mature markets, like North America and Europe, most households already buy tissues and disposable diapers. Aside from raising prices, the company has few opportunities to boost sales. The explosive growth, the kind that gets investors and Wall Street excited, now lies in the developing markets, where Kimberly Clark has plowed most of its investment dollars.

China presents the big enchilada. In 2015, the country’s authorities embraced a new two-child policy, doubling the number of children couples could conceive. In a country with over one billion people, even a small percentage change in the number of births can be staggering. Because of the new policy, the number of babies in China jumped by almost two million. (Source: “Kimberly-Clark has its aims set on diaper sales in China,” CNBC, January 26, 2017.)

For one of the biggest makers of diapers in the world, that’s like adding a market half the size of the United States almost overnight.

In plain English, Kimberly Clark now spends less and makes more—the five favorite words of any Wall Street analyst. And it’s not just China: in southeast Asia, the company reported a 10% year-over-year increase in organic sales; in Latin America, it also reported a 10% increase; and in eastern Europe, it reported a 20% increase. These regions add up to a combined market of over two billion people.

And with incomes rising, demand for higher-end tissues, diapers, and paper towels have kept rising. That means we’re still in the early chapters of this expansion story.

Such growth should translate into respectable financial results. In July, Kimberly Clark Corp projected a three percent increase in organic sales for 2019, up from a previous outlook of one or two percent. Management also boosted their profit guidance, estimating that earnings per share will grow between five and eight percent. (Source: “Kimberly-Clark Announces Second Quarter 2019 Results,” Kimberly Clark Corp, July 23, 2019.) 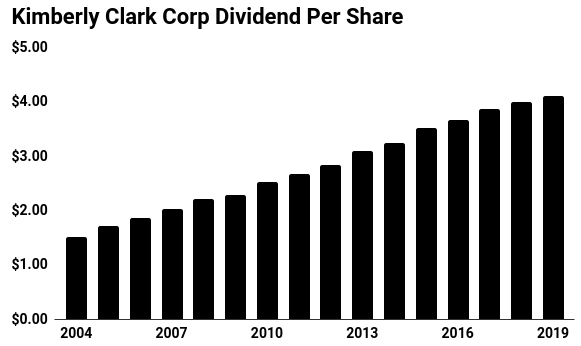 Those kinds of numbers won’t knock your socks off, but given that KMB stock pays an upfront shareholder yield (dividends plus buybacks) of five percent, even a modest growth rate can translate into tidy profits.

Assuming that management boosts the payout in line with earnings, Kimberly Clark shares could deliver a respectable low double-digit return for investors. That more than meets my hurdle rate for such a wonderful business.

What Could Go Wrong?

Even the best dividend stocks have downsides. With a long growth runway, I see three potential headaches for Kimberly Clark Corp: geopolitical risks in emerging markets, a strong U.S. dollar, and competition biting into margins.

Kimberly-Clark must constantly invest in product innovation that resonates with changing consumer tastes. Lower-priced private label brands could also eat the company’s market share. So far, management has proven themselves adept at addressing these challenges, but if the firm starts conceding sales to its rivals, KMB shareholders will pay a price.

The other two risks look much more mundane. Operating in foreign countries presents a challenge. Violent revolutions, corruption scandals, or unexpected coup attempts will make headlines every so often. But given that Kimberly Clark operates in so many markets, a problem in one region won’t spell disaster.

Furthermore, a sharp rise in the U.S. dollar over the past few years has reduced the value of Kimberly Clark’s overseas profits. Over time, however, these currency fluctuations tend to even out. And with the Federal Reserve poised to lower interest rates, I wouldn’t be surprised to see this drag on earnings actually become an unexpected profit booster.

One of the Best Dividend Stocks for 2019 and Beyond?

Kimberly Clark Corp is a classic example of a wonderful business leveraged to a big investment trend. With the global middle class projected to balloon in size, this company looks poised to make a fortune. That could potentially translate into a lucrative and growing income stream for Kimberly Clark stock investors.