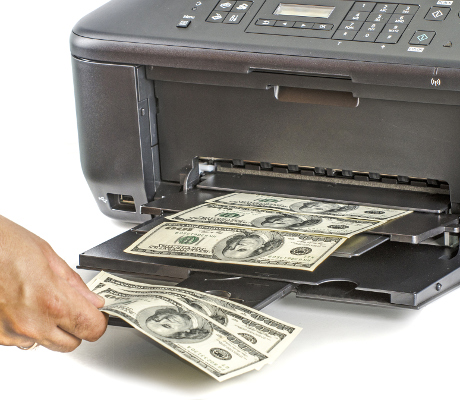 Why HP Inc Is a Top Income Stock: A Safe 3% Dividend Yield 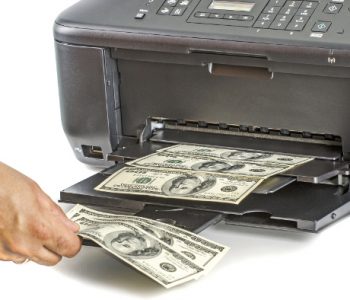 The name HP Inc (NYSE:HPQ) is typically associated with unexciting, even declining PC and printer segments. But many investors would be surprised to know that HP stock is up a monstrous 55% over the past year, easily topping the S&P 500’s return of 19% over the same time period.

Management has done well to reignite growth ever since splitting up with Hewlett Packard Enterprise Co (NYSE:HPE) in late 2015, and the momentum doesn’t seem to be slowing. The latest pop came just two weeks ago, when HP Inc spiked about nine percent on solid Q1 results, leaving value-oriented income investors like me wondering if the boat has gone bye-bye.

As I always say to our Income Investors readers, even well-performing companies can turn out to be bad-performing investments if you don’t pay attention to price.

Well, luckily for prospective dividend investors, HP’s price is not only reasonable, but the dividend makes it quite attractive.

In Q1, HP’s earnings per share of $0.38 topped the consensus by $0.01, as revenue climbed 3.7% to $12.7 billion, easily topping estimates by $850.0 million. That isn’t breakneck growth, of course, but considering that it came on the strength of PC sales, even that smallish bump is quite significant.

See, the majority of HP’s top-line increase was fueled by its Personal Systems segment, where revenue spiked 10% to $8.2 billion on strong demand for notebooks and workstations. So while the PC market continues to decline as a whole, it’s clear that HP is doing a great job in targeting specific pockets of growth, such as high-end notebooks and gaming systems.

In fact, HP outperformed overall PC market unit growth by 8.5 points during the quarter, besting all key competitors and reaching its highest-ever global market share of 22%. That performance is especially impressive given how balanced the PC segment performed across geographies and product segments.

Furthermore, operating margins for the PC segment expanded year-over-year to a solid 3.8%, proving that HP is not only gaining market share, but is maintaining price and cost discipline as well. In business, that’s a wonderful place to be. 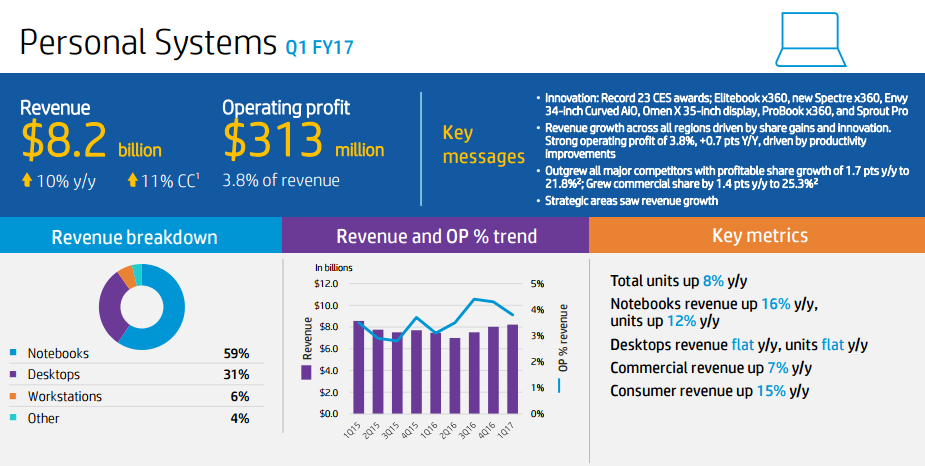 “In Q1, we delivered earnings at the high end of our outlook range with strong free cash flow, driven by relentless execution and innovation,” said President and CEO Dion Weisler. “We are confident in our ability to manage our business and deliver our FY17 financial commitments.” (Source: “HP Inc. Reports Fiscal 2017 First Quarter Results,” HP Inc, February 22, 2017.)

No analysis of HP’s results would be complete without looking at its Printer segment. Because while PCs account for the vast majority of HP’s revenue, the printing business still generates about 70% of the company’s operating profit.

For the quarter, print revenue sank three percent to $4.5 billion, due in large part to the overall decline of printer demand. While total hardware units in the segment were up six percent, the gain was almost entirely fueled by lower prices, which is not what we want to see as investors. For instance, unit sales of HP’s commercial printers edged up two percent in the quarter, but revenue for the products plunged a disappointing eight percent.

Of course, there is still a very good reason to remain bullish about HP’s prospects within the segment: 3D printing.

Specifically, HP has ambitious plans to disrupt the $12.0-trillion traditional manufacturing market with its unique 3D printing technology, “Multi Jet Fusion,” which can print using multiple materials or colors at the same time.

While management certainly has its 3D goals set high, it continues to execute quite well. In fact, Q1 was a milestone quarter of sorts, with the company’s first 3D unit shipments and revenue recognition. HP said that customers such as Jabil Circuit, Inc. (NYSE:JBL), Materialise NV (ADR) (NASDAQ:MTLS), and Shapeways have received installations, with Multi Jet Fusion already receiving overwhelmingly positive reviews.

So although the printer business remains sluggish at the moment, it could very well be exposed to HP’s most promising growth area.

More importantly for income investors, though, is that HP’s solid results are translating into solid cash flows. And as I always tell our readers, cash is what pays those dividend checks.

During the quarter, free cash flow clocked in at a strong $735.0 million thanks to the better-than-expected PC demand, as well as improvements made to its sales model. Of that amount, $613.0 million was returned to shareholders through dividends and share repurchases, putting the company comfortably on pace in its promise to return 50%–75% of free cash flow for the year.

Given HP’s structural improvements and strong PC performance, management believes that free cash could be at the higher end of its $2.3 billion—$2.6 billion free cash flow guidance for 2017.

When you couple the largely positive outlook for HP’s business with management’s payout commitments, I wouldn’t expect the capital returns to slow anytime soon.

“We see plenty of momentum, innovation, and opportunity for us to capture in both the near and long-term and are aggressively pursuing profitable share and targeting strategic growth segments,” said Weisler in a conference call. “We’re continuing to accelerate and deliver for our customers, partners, employees, and shareholders.” (Source: “HP (HPQ) Q1 2017 Results – Earnings Call Transcript,” Seeking Alpha, February 22, 2017.)

We can now circle back to HP’s positive stock price momentum, which, after taking a closer look, seems pretty reasonable given how well the company’s revenue and cash flows are holding up.

But the great part is that even with the recent rally, HP still boasts a relatively attractive dividend yield of 3.1%. That’s higher than the industry average of 1.5%, as well as the S&P 500’s 2.1%.

Furthermore, HP sports a cheapish forward price-to-earnings (P/E) multiple of 11. In my opinion, that makes it a much more inexpensive (and smarter) way to gain exposure to the high-growth 3D printing space than more conventional plays like 3D Systems Corporation (NYSE:DDD) (forward P/E of 29) and Stratasys Rg (NASDAQ:SSYS) (forward P/E of 35).

In other words, I think HP has plenty of total return upside left.

The Bottom Line on HPQ Stock

Don’t let HP’s white-hot price action prevent you from looking into the opportunity. Both the traditional PC and printer markets continue to see a drawn out secular decline, but HP’s focus on higher-growth PC niches, coupled with its massive upside within 3D printing, make the stock an especially exciting dividend pick.