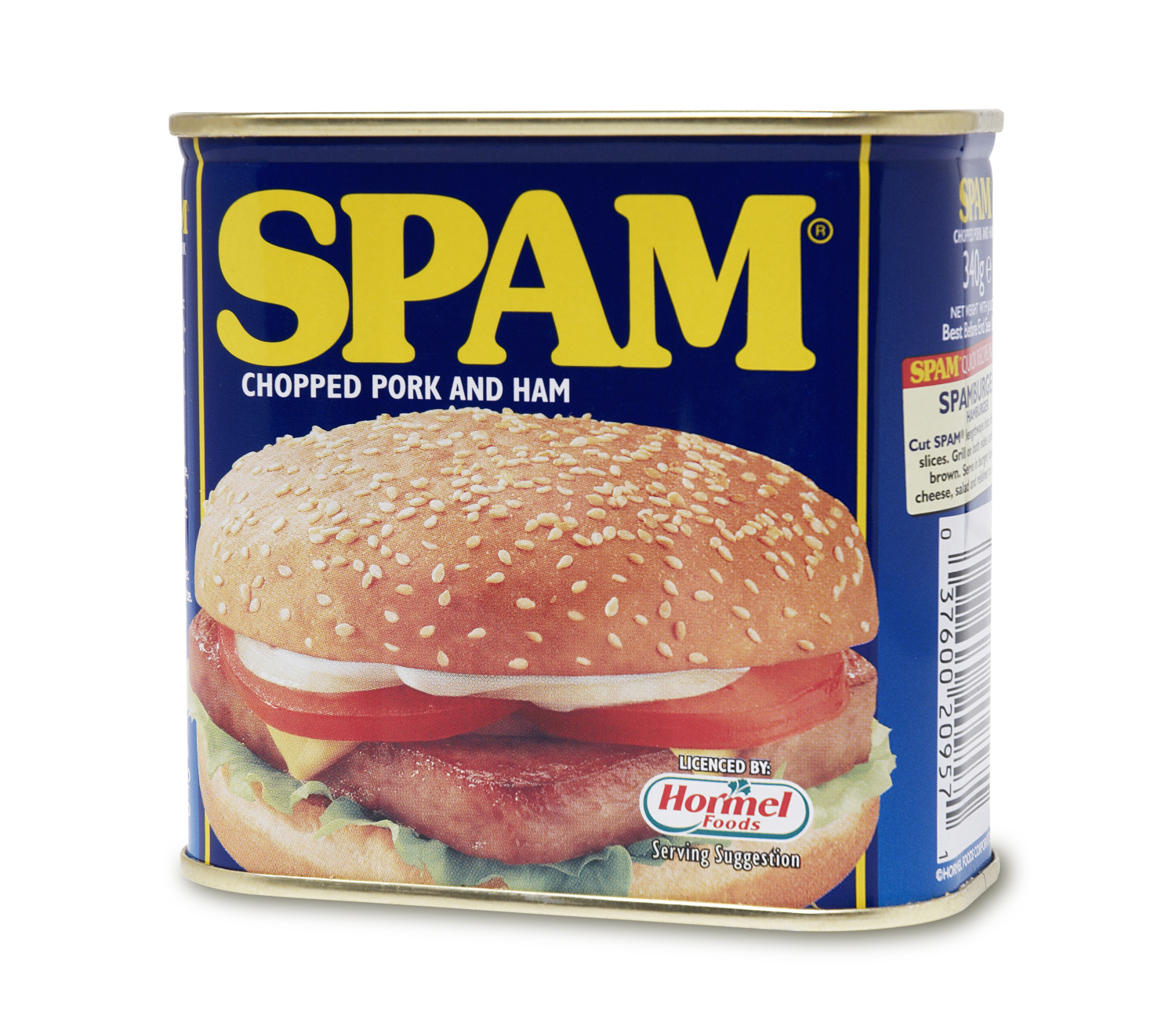 Hormel Foods Corp: This Stock Has Raised Its Dividend for 52 Years 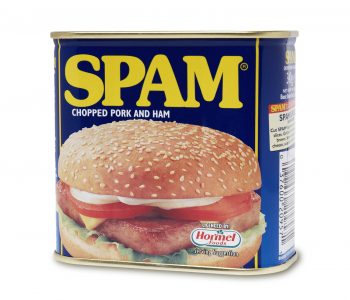 One Stock to Own Forever?

Case in point, Hormel Foods Corp (NYSE:HRL). While most people have never heard of it, you probably recognize some of the company’s best-known brands, like “SPAM” canned meat and “Skippy” peanut butter. For owners, such simple businesses have translated into 52 consecutive years of dividend hikes.

And after a recent selloff, we think this bargain looks like a good place to put fresh money to work right now.

The company’s roots go back to 1887, when founder George A. Hormel borrowed $500.00 to start a meat packing business. Management broke new ground in the industry over the following years, with innovative products like SPAM, dry sausages, and refrigerated entrees. Throughout World War II, Hormel Foods shipped up to 15 million cans of meat for soldiers overseas each week.

I love this “sell the basics” business for a few reasons. For one, it’s a simple operation. While high-tech firms have to invent the next great gizmo every other year, Hormel doesn’t have this burden. The company makes the same quality products every day, many of which you probably have in your pantry right now.

These products have also stood the test of time. And in some cases, said products have remained virtually unchanged for decades. I don’t know what social network tweens will use 50 years from now, but I’m pretty sure my grandchildren will still enjoy Hormel foods.

This simple business has returned stable profits to shareholders. Thousands of businesses have come and gone since the late 1800s. Yet, despite two World Wars, the Great Depression, and countless bear markets, Hormel has continued to mail out dividends to investors.

Moreover, Hormel enjoys an entrenched market position. Shoppers tend to be careful about what they put in their mouths (and especially what they feed to their kids). Once customers trust a brand, they tend to buy it over and over again—and will pay a premium, to boot.

You’d have a tough time eating into this business. Thanks to its good reputation, Hormel enjoys a privileged relationship with supermarkets. Retailers usually reserve their best shelf space for the company for this reason, rather than taking a chance on upstarts.

Across the rest of the food business, cutthroat competition has eaten into margins. And due to stagnant wages, many shoppers have traded down to off-brand products. However, many of the categories that Homel competes in don’t suffer from a lot of private label products. This has allowed the business to sail through a tough period for food makers, earning outsized margins year after year.

Furthermore, Hormel’s raw size gives it a cost advantage. With over $9.1 billion in annual sales, the company swings a big stick in the industry. This allows management to pressure suppliers for lower prices and strike lucrative deals with distributors.

Hormel also benefits from economies of scale. Its huge empire allows the company to spread its distribution, marketing, and administration costs over more sales. A larger base of operations also allows management to exploit more efficient production methods.

People who say the best things come in small packages never worked in business. Companies with a low-cost advantage can sell their products at the same price as rivals, but make a higher profit while doing so. Or low-cost producers can undercut the competition, grabbing more market share. Either way, owning the biggest, baddest operations tend to pay off over the long haul.

If you want proof of Hormel’s strong business, take a glance at the company’s financial statements. Over the past few years, gross margins have routinely topped 20%. These numbers stand head and shoulders above all others in the food business and represent the hallmark of a wonderful business.

For owners, these margins turn into oversized returns. Over the past 25 years, the company has earned an average annual return on invested capital of more than 20%. And since 1993, shares have generated a total return, including dividends, of 2,100%.

The company has taken a disciplined approach to acquisitions. Management has concentrated their investment dollars on high-margin household brands while reducing the firm’s reliance on competitive meat processing businesses. We tend to look at acquisitions quite skeptically, but Hormel has avoided overpaying for purchases or straying too far from its core areas of expertise.

For proof, you only need to glance at the company’s financial statements. Between 2008 and 2017, management invested $3.7 billion back into the business. Over that period, the company’s market value increased by $12.6 billion. So, for every $1.00 that Hormel has retained, executives have created $3.40 in market value for shareholders. That’s impressive.

Furthermore, we admire management’s financial conservatism. When it comes to dividends and leverage, we take a “Goldilocks” approach. Businesses should strive for an ideal number on every financial metric, that’s neither too high nor too low for a particular operation.

Dividends and share repurchases are used to return cash to shareholders. Just like with financial leverage, an analyst is like Goldilocks, looking for an amount of cash returning to shareholders that’s neither too little nor too much for a specific company.

In the case of Hormel, management has often struck the right balance. The company’s 40% payout ratio rewards shareholders but leaves enough money to invest in new business. Likewise, the company’s moderate debt load maximizes shareholder value while leaving some wiggle room. The Hormel Foundation (which currently has a 48% equity stake in the business) has a type of conservatism across all areas of the firm’s business.

Finally, we have to point out the board’s savvy executive pay structure. Over 75% of management compensation is split among annual and long-term incentives, as well as stock options. Payouts depend on several key metrics, including segment profits, earnings per share, earnings before interest and taxes, and share performance relative to peers.

The structure rewards long-term performance while aligning executive and shareholder interests. Insiders also hold a large position in common shares themselves. So they’re putting their money where their mouths are.

For owners, Hormel’s “sell the basics” business has created a steady stream of income.

Management has delivered 52 consecutive years of annual distribution hikes. That performance has earned the company a spot on the elite list of “dividend aristocrats.” And with a yield approaching 2.1%, Hormel shares have a juicer payout than other meat specialists like Tyson Foods, Inc. (NYSE:TSN) and Pilgrim’s Pride Corporation (NASDAQ:PPC). 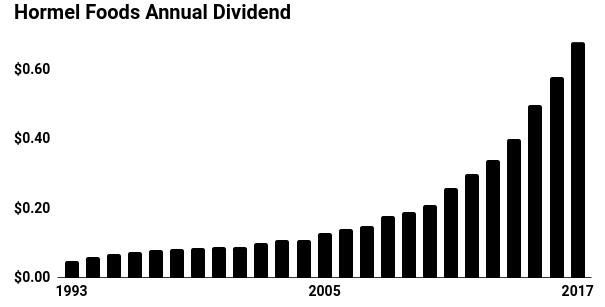 The company’s payout looks rock solid. As mentioned above, management pays out only 40% of profits as dividends. This leaves management plenty of wiggle room to keep mailing out checks, even if the business runs into a bad year or two. And, given that people always need to eat, shareholders don’t have too much to worry about.

The dividend should continue to increase as well. You can’t call Hormel a growth stock, given that the packaged food business matured decades ago. Legacy brands like SPAM and other namesake products will never post blowout numbers.

But as management continues to pivot to faster-growing brands and categories, its growth rate should improve. Over the next five years, analysts expect earnings per share to grow between seven percent and nine percent annually. Investors can expect the distribution to grow more or less in line.

For owners, this should translate into respectable profits. With a yield of 2.1% and the prospect of dividend growth in the high-single digits, we estimate Hormel’s total return potential at about 10% annually.

The main risks to our thesis come from store competition and global trade, as well as feed and input costs.

As management diversifies away from fresh meat and toward consumer brands, Hormel has to fight for store shelf space. So far, the company has established itself as a valued supplier. But if Hormel drops the ball on new product ideas, it could get pushed off retail counters. Owners shouldn’t lose too much sleep over this potential problem, although it’s worth mentioning.

Furthermore, Hormel would become collateral damage in any trade war. As it builds its business overseas (the Chinese love SPAM, apparently), the company has more exposure to currency risk, livestock disease, and trade disputes. Food safety concerns often serve as cover for protectionist measures. In many trade actions, politicians don’t worry too much about the profits of multinational food processors.

Hormel, in fact, raises some of the meat it needs for products, rather than buying supplies from third parties. Management has little control over prices and input costs. And like any commodity business, you usually only earn thin margins. Hormel’s executives, thankfully, have started to divest these operations, moving into more lucrative retail brands.

In fact, you can blame commodity prices for much of Hormel’s disappointing performance. Record volatility in the pork and turkey markets hammered profits, sending shares plunging over 20% last year. Over the long haul, we think these bad quarters will look like a blip. Wall Street tends to overreact to bad news. In the meantime, this business will still cause headaches from year to year.

The Bottom Line on Hormel Foods

Telling readers to consider Hormel Foods is a bit like telling your child to get an accounting degree. The company delivers earnings, but no excitement. It delivers profits, but no posh. It delivers cash, but no commotion.

In short, Hormel’s “sell the basics” business doesn’t make headlines. Longtime shareholders, though, really don’t seem to care. Given the company’s long history of growing dividends, such an approach has paid off for investors.