High yield bonds get issued by shaky businesses with less-than-stellar prospects. For this reason, traders nickname them “junk.” Because they often pay the highest yields around, retail investors have bought them hand over fist.

Prices, though, have gotten lofty. High-yield bonds pay less than six percent today. And while that might sound impressive at first glance, this yield represents one of the lowest payouts over the past decade.

You can see this clearly in the Merrill Lynch US High Yield Option-Adjusted Spread. The index measures the difference in yield between government bonds and the riskiest corporate loans. That spread recently dropped below four percent, which should have investors worried for a couple of reasons.

First, such a tight spread often foreshadows huge losses. We saw this indicator drop below four percent in 2007. In the following year, the Great Recession triggered a 30% plunge in high-yield bond prices.

The same thing happened again in 2014. A wave of defaults in the oil patch sparked huge losses. Over the next year and a half, high-yield bond prices dropped 20%.

Today, junk bondholders now have no room for error. You need to earn a big premium to make up for the higher rates of defaults in these issues. But with yields so low, a small downturn could wipe you out.

And you have good reason to worry. Retailers, who have loaded up their balance sheets with debt, now declare bankruptcy left and right. And while shale drillers have recovered, a small tick down in oil prices could push them to the brink.

All of that has been thrown out the window. Investors will fund any two-bit business idea just to earn an extra point of yield. The situation is akin to picking up pennies in front of an oncoming freight train. 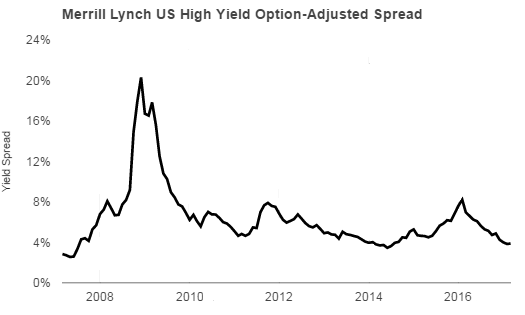 I’m not the only one worried.

Earlier this month, “Bond Kind” Bill Gross told Reuters junk bonds have priced in “too much” hope. Investors, he believes, have fallen for the “Trump mirage,” as well as the “magical benefits” of deregulation and tax cuts.  (Source: “Gross says equity markets, junk bonds pricing in ‘too much’ hope, growth,” Reuters, April 13, 2017.)

What could have these financial titans so nervous? This critical indicator is flashing red. And the last time we saw yields drop this low, junk bonds got clobbered.