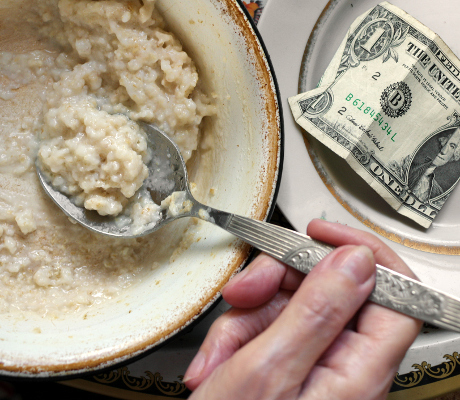 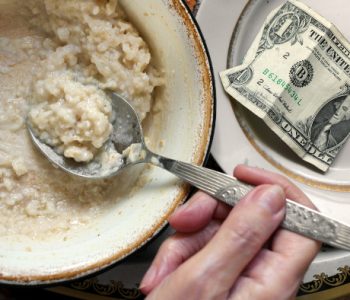 With the Dow continuing to hover above 20,000, it’s been kind of tricky to find dividend bargain stocks of late. That’s why General Mills, Inc. (NYSE:GIS) stock, which is down more than 15% from its 52-week highs, is particularly intriguing to this value hound.

After all, when a company boasts such well-known and ubiquitous food brands like “Cheerios,” “Häagen-Dazs,” and “Yoplait,” opportunities to buy GIS stock on the cheap are few and far between. But considering the stock’s weakness over the past several months, including the outlook-related dip late last week, we might now be staring at one of those rare chances.

Before we can conclude if GIS stock fits that description or not, let’s figure out what’s happening operationally.

To be sure, GIS stock is slumping for very good reason: revenue and earnings are slumping too. Over the past three years, in fact, General Mills’ bottom line has decreased at an annual rate of three percent, while revenue has declined at a pace of about two percent over the same time period.

So what’s the problem? Well, believe it or not, General Mills’ troubles lie primarily within its yogurt business, which has struggled to maintain market share amid intensifying competition.

Although it is probably best known for cereals, General Mills’ yogurt segment represents a good chunk of overall business, accounting for roughly 15% to 20% of total company sales. Thus, with consumers having largely overlooked Yoplait in favor of growing brands like “Dannon,” “Chobani,” and “Siggi’s” in recent years, General Mills’ top line has definitely felt the pressure.

Just last week, GIS stock fell another three percent after the company lowered its 2017 sales guidance. Driven largely by continued Yoplait weakness, management now sees a full-year organic revenue decline of four percent, which is at the low end of its prior view of a three-to-four-percent decline.

“We know we have a good deal of work to do to turn around our yogurt business,” said President and Chief Operating Officer Jeff Haerming in the Q2 conference call with analysts. “We expect some improvement in the second half but won’t return to growth this year. We believe the key to success will be fundamentally shifting our portfolio through renovation and innovation to give consumers what they want from their yogurt.” (Source: “General Mills’ (GIS) CEO, Ken Powell on Q2 2017 Results – Earnings Call Transcript,” Seeking Alpha, December 20, 2016.)

On the bright side, management has actually done an admirable job in dealing with its yogurt-related troubles. In fact, profitability has actually increased over the past several quarters, suggesting that the situation isn’t as dire as GIS stock’s decline would lead you to believe.

To battle the slumping demand for Yoplait and, to a lesser extent, its “Progresso” soup and “Pillsbury” dough brands, General Mills has enacted a global restructuring of sorts. The strategy involves scrutinizing the portfolio, prioritizing growth brands (such as Haagen-Dazs, “Annie’s,” and “Old El Paso”), shedding unprofitable assets, and significantly cutting costs. 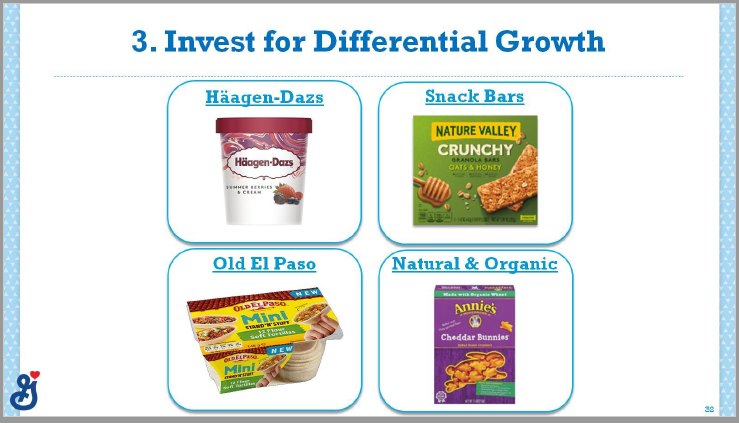 Despite the company’s top-line pressures, General Mills has managed to expand its segment margins by roughly 500 basis points over the past five years. And in the last quarter, gross margins expanded 130 basis points, while operating margins increased 160 basis points, which was more than enough to offset input cost inflation.

Looking further ahead, General Mills is aggressively targeting $700.0 million in annual cost savings beginning in fiscal 2018. Moreover, management remains confident in the company’s ability to deliver on its goal of a 20% operating margin by that point.

Bolstered by General Mills’ margin-enhancing actions, the company’s cash flow also remains quite healthy. And as I constantly tell our Income Investors readers, cash flow is what matters.

Over the first half of fiscal 2017, operating cash flow clocked in at a robust $988.0 million, $576.0 million of which was paid in dividends, a solid increase of eight percent over the year-ago period. In fact, General Mills has paid dividends without interruption for 117 years, and has even boosted the payout for the last 13 straight.

With the company expecting 2017 free cash flow growth in the mid-single digits while continuing to target a cash return of greater than 90%, I wouldn’t expect that streak to end anytime soon. 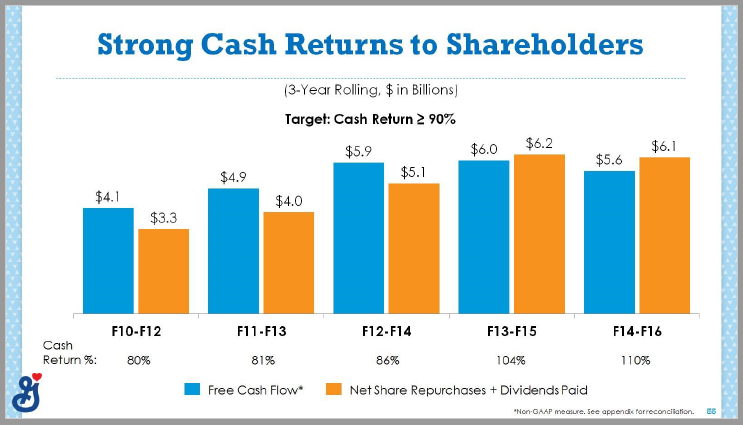 So although the company is going through some top-line turbulence at the moment, General Mills’ still-massive market share (30% shares in domestic cereals, 70% of refrigerated baked goods, and about 40% of grain snacks), enviable retail relationships, and recent streamlining initiatives continue to support shareholder-friendly capital returns.

That brings us back to General Mills’ stock price slump, which now seems a tad overdone, given how well the company’s margins, cash flow, and dividends are holding up.

GIS stock now boasts an attractive dividend yield of 3.2%, well above the industry average, as well as the S&P 500, which both sport a yield of about two percent. Moreover, GIS stock’s price-to-earnings ratio of 22 represents a clear discount to close rivals like Kellogg Company (NYSE:K) (37), Campbell Soup Company (NYSE:CPB) (28), and Kraft Heinz Co (NASDAQ:KHC) (38).

So while I wouldn’t exactly call GIS stock a screaming bargain, it is certainly a relatively inexpensive income opportunity.

The Bottom Line on GIS Stock

Best of all, with a growing dividend and an above-average yield, GIS stock can pay shareholders to wait until it does.