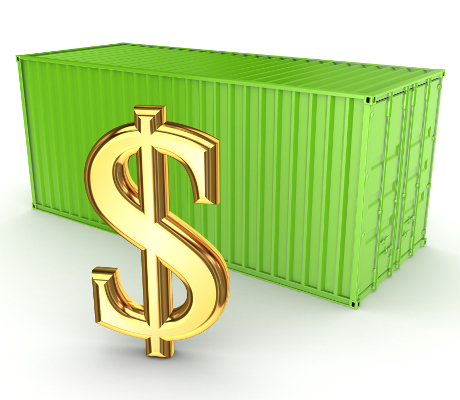 Why Extra Space Storage is a Top Stock: A Dividend That Skyrocketed 680% 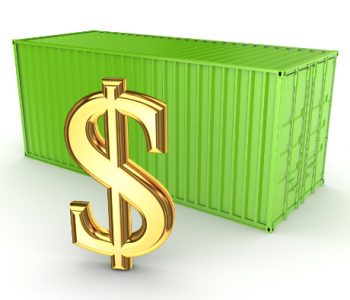 One of the best ways to find cheap dividend stocks is by combing through industries that are experiencing a slowdown of sorts. Extra Space Storage, Inc. (NYSE:EXR) is one such stock, with an attractively growing dividend, but whose price has fallen amid weakness within the storage real estate investment trust (REIT) space.

As I always remind our Income Investors readers, even the greatest company in the world can turn out to be a horrible investment if the purchase price is too high. Thus, it’s vital that we do everything we can to buy high-quality companies only when they’re selling at discounted prices. By doing that, we’re able to significantly reduce risk by giving ourselves a nice “margin of safety” to work with.

Judging from Extra Space’s market-topping results last week, the stock is simply being thrown out with the storage REIT bathwater, providing investors with a tremendous total return opportunity with limited downside.

If the self-storage industry is slowing down, it would be difficult to tell from Extra Space’s performance alone.

In Q4, Extra Space posted funds from operations (FFO) of $1.03, topping the consensus by $0.05, as revenue jumped 17% to $229.0 million. Moreover, same-store revenue and net operating income (NOI) increased 5.2% and 7.9%, respectively, suggesting that the company’s competitive position across the country remains strong.

Now, to be sure, Extra Space is definitely feeling the effects of wider industry sluggishness. Occupancy for the company’s same-store pool ended 2016 at 92%, down about 80 basis points from the year-ago period. However, even without the benefit of growing occupancy, Extra Space’s full-year adjusted FFO per share jumped 18%, while same-store revenue increased 6.9%.

“Same-store revenue and NOI growth for the year were among the highest in our history, and earnings and FFO per share increases were among the best of all public real estate companies,” said CEO Joseph Margolis. “[W]hile growth rates have moderated from all-time highs, we anticipate solid revenue, NOI and FFO growth in 2017.” (Source: “Extra Space Storage Inc. Reports 2016 Fourth Quarter and Year-End Results,” Extra Space Storage, Inc., February 21, 2017.)

So how is Extra Space able to post such strong growth in an industry that is clearly slowing down? Simple: it all boils down to the company’s highly diversified portfolio.

See, Extra Space currently has about 1,420 storage properties within its portfolio, but of that amount, only about 60% are wholly owned by the company. The rest are either owned through joint ventures (about 10%) or simply managed through a third-party contract (30%).

Thus, Extra Space isn’t completely exposed to the vagaries of the self-storage market, but is still able to fully capitalize on its competitive advantages within the space.

The company’s third-party management business is particularly beneficial. Because of its capital-light nature, the segment provides Extra Space with a highly stable recurring revenue stream, which goes a long way to smooth business out during times of high volatility. Moreover, it allows the company to make new acquisitions on a regular basis, shoring up growth for the long term.

Given management’s aggressive plans to consolidate the still-highly fragmented industry, this steady of stream of cash serves as a huge advantage for the company. 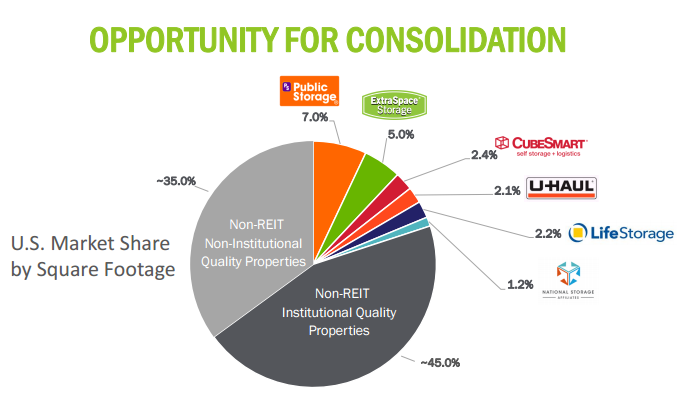 But not only is Extra Space’s portfolio well-diversified by offering, it’s also nicely diversified geographically.

Extra Space’s portfolio spans right across the United States, with California (19%), Texas (10%), and Florida (10%) representing its biggest states. So although the company’s West Coast properties remain at the core of its portfolio, the volatility across different markets is well-balanced by Extra Space’s geographic diversification. 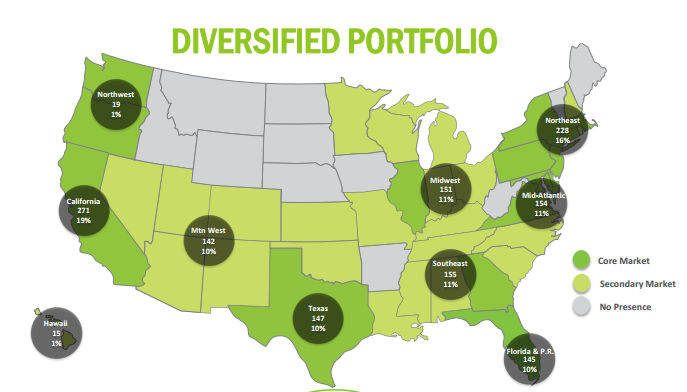 In Q4, for example, weakness in major cities like Boston, Chicago, and Denver was more than offset by solid growth in places such as Los Angeles, Phoenix, and Tampa.

“We benefit from our highly diversified portfolio, which reduces the volatility of cyclical markets,” said Margolis in a conference call with analysts. “Much of the new supply delivered early in the development cycle has had minimal or only temporary impact on our stores due to pent up demand and not one of our [metropolitan statistical areas] experienced negative revenue growth for the year.” (Source: “Extra Space Storage’s (EXR) CEO Joe Margolis on Q4 2016 Results – Earnings Call Transcript,” Seeking Alpha, February 22, 2017.)

But all of the diversification in the world is meaningless to us Income Investors if it doesn’t translate into fat and growing dividend payments. Luckily for Extra Space shareholders, it absolutely does.

Over the past five years, in fact, Extra Space has managed to increase its dividend a staggering 680%, which works out to a compounded annual growth rate of roughly 51%. 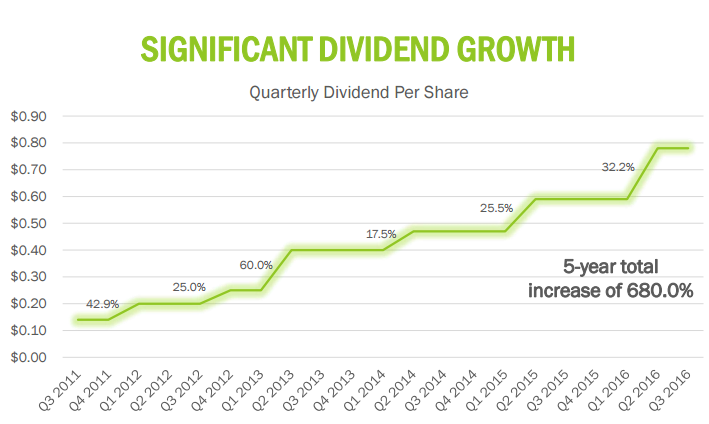 It should come as no surprise, then, that Extra Space’s stock price performance over the same time period (+200%) easily crushes that of close rivals like Public Storage (NYSE:PSA) (65%), CubeSmart (NYSE:CUBE) (130%), and Life Storage Inc (NYSE:LSI) (80%).

In other words, Extra Space has delivered a high-flying dividend to shareholders along with remarkable multi-bagger price appreciation. That’s the stuff retirement dreams are made of.

Of course, you would be correct to question how sustainable Extra Space’s dividend is. After all, it would be silly to expect 50% annual dividend growth from the company going forward. But while investors should certainly temper their expectations, it should be noted that Extra Space’s spiking dividend has been largely supported by industry-crushing adjusted FFO growth. 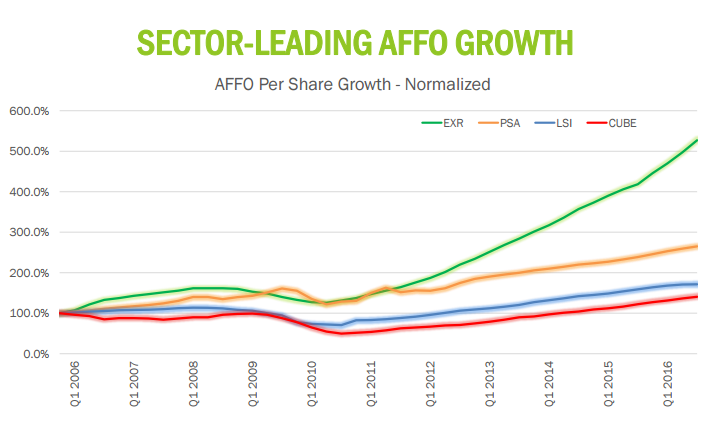 In the world of REITs, FFO is what is used to pay dividends to shareholders. Extra Space’s pricing power, portfolio diversification, and aggressive store expansion has done well to fuel high-flying FFO, and given the secular trend of downsizing, should continue to do so in the future.

More importantly, with the company’s FFO payout ratio sitting comfortably around 80%, I can only see the dividend increasing right along with it.

Extra Space for Us?

That brings us back to Extra Space’s stock price, which is still off more than 15% from its 52-week highs, severely underperforming the broader market over the past year. Given the strength of Extra Space’s fundamentals, I definitely think there’s an opportunity here for Income Investors.

Currently, Extra Space sports a tempting dividend yield of 3.9%. While that is lower than Life Storage (4.3%), it’s higher than that of Public Storage (3.5%) and CubeSmart (four percent). Moreover, Extra Space’s current price-to-cash flow of 18.5 is right in line with the industry average of 19. For a company with above-average economics, that market pricing doesn’t make a whole lot of sense.

Considering how much faster Extra Space’s FFO, property count, and dividends are growing than the majority of its peers, EXR stock deserves to trade a clear premium to the self-storage industry.

The Bottom Line On Extra Space

In my eyes, Extra Space is an obvious dividend value opportunity. While the self-storage space is certainly slowing down a bit, the company’s highly diversified portfolio continues to drive strong cash flow and dividend increases, while new acquisitions virtually ensure solid long-term growth.

Moreover, with the self-storage market still in relatively healthy shape as baby boomers continue to downsize their homes, Extra Space’s near-four-percent dividend yield is as stable as it is attractive.