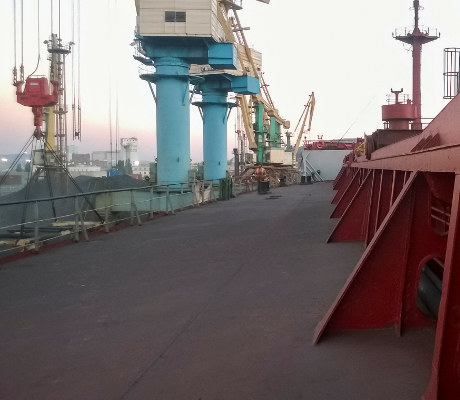 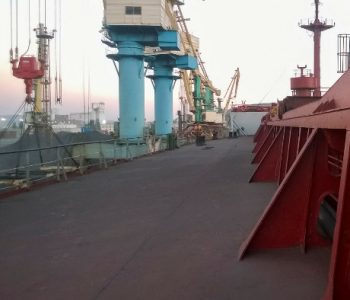 I hope all readers understand this basic tenet of my investment approach: I seek out conservative, low-key businesses that have quietly made their shareholders rich.

You can see this in picks like Waste Management, Inc.’s (NYSE:WM) trash-collection business, Aqua America, Inc.’s (NYSE:WTR) utility assets, or Old Republic International Corporation’s (NYSE:ORI) property-insurance empire. These stocks don’t have a lot of flashes, but they pay out reliable dividends (and deliver outsized returns) to owners.

Case in point today: Emerson Electric Co. (NYSE:EMR). The media doesn’t often cover this Midwest firm, sticking to more exciting businesses on the coasts, but Emerson has delivered over 60 years of consecutive dividend hikes while discreetly making its investors a fortune.

Emerson can trace its roots back to 1890. The company started out making small motors for electric fans. Customers quickly caught on to the company’s high-quality products, and Emerson branched out into new product lines like sewing machines, dental drills and electric tools.4

Today, Emerson has grown into an industrial conglomerate grossing $16.0 billion in annual sales. The company has divided itself among two segments (Automated Solutions as well as Commercial and Residential Solutions). So if you’re a business looking to cut costs, improve safety, or build a new factory, these are the guys you’d want to consult.

In other words, it’s a terribly unglamorous business that you probably don’t hear much about. And that’s just fine with me because you’d be hard-pressed to find a more dependable dividend payer. Emerson’s business stands out from the pack for a couple of reasons.

The company’s raw size provides a competitive edge. Emerson benefits from economies of scale, which allows it to make commodity-like products at a lower cost than rivals. Like the Amazon.com, Inc. (NASDAQ:AMZN) of industrial parts, competitors have a tough time matching this low-cost advantage.

Once Emerson gets a new client, they lock in a steady income stream through aftermarket parts and services. Equipment lasts on average 20 to 40 years, securing a lengthy customer relationship. This creates an opportunity to drive additional higher-margin revenue over time, as the company graduates from a preferred supplier to a trusted customer adviser.

These relations tend to be pretty sticky, too. Swapping out parts from a lower-cost competitor often requires overhauling entire manufacturing processes. New equipment almost always comes with some bug after installation, resulting in unplanned downtime. Such, switching costs often outweigh the benefits of changing suppliers.

The situation resembles Apple Inc’s (NASDAQ:AAPL) approach. Apple makes a little bit of money on each gadget upfront, but then they trap you in their ecosystem. With each iTunes song, you download or iPhone app purchased, it gets harder and harder to move to Android or (chuckle) Blackberry. Your next purchase will likely be an Apple product, and most customers will pay a premium to boot.

For Emerson, this triple-threat results in outsized profits. The company’s return on invested capital routinely tops 15%, well above its cost of capital. You see businesses deliver numbers like these once in a while, but few can maintain such profits over such a long period of time.

Exciting stuff? Hardly. Heck, I don’t even think the CEO gets all that excited about valves, sensors, and actuators. But the company makes a ton of money ($1.5 billion in fiscal 2017), which has allowed management to raise the distribution every year since 1957.

Think about that for a minute. Every year. Since 1956. Though the Cuban Missile Crisis, Vietnam, gas lines, Watergate, the rise of Japan, the tech bubble, 9/11, the financial crisis, the Cubs winning the World Series, Emerson went about its business, advising a client, making industrial parts, and paying out more money to investors than the year before.

The last time Emerson did not increase its dividend, President Eisenhower was in the White House, the Dodgers played in Brooklyn, and The Hula Hoop had yet to be invented.

That payout will likely keep growing, too. Over the past few years, executives have sold-off less profitable divisions. Management instead has focused investment dollars on a few core operations, namely process automation as well as commercial and residential solutions.

I like this approach to doing business. Rather than trying to be all things to all customers, Emerson focuses on the one or two things it does best. That has resulted in a smaller, but more profitable company. And since the firm embarked on the campaign, we’ve seen big improvements in net margins and returns on invested capital.

Looking forward, analysts see growth accelerating. The street sees earnings per share will grow at a high-single-digit clip over the next five years, driven by acquisitions, organic sales, and a strong economy. cost-cutting measures. And with one of the longest dividend track records around, I have little doubt that growth will result in higher distributions for owners. 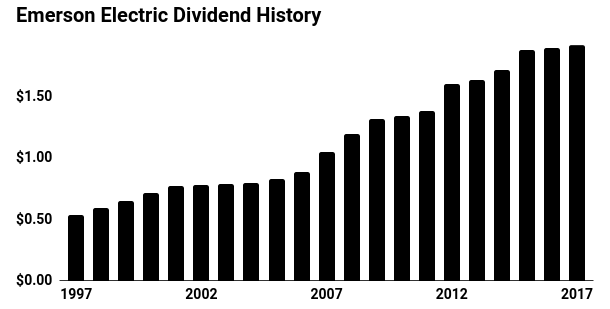 Today, Emerson’s upfront yield (3.0%) might not knock your socks off. But combined with a respectable dividend growth rate in the high single-digits, the company’s total return comes in at around 10% annually. This meets our hurdle rate for a wonderful, blue-chip business.

Emerson’s rich offer for rival Rockwell Automation Inc. (NYSE:ROK) sparked concerns about the company’s slowing growth prospects. CEO David Farr, however, wasted no time reassuring investors in a recent conference call. It pointed to the company robust recovery in Automation Solutions orders and highlighted plan for smaller bolt-on acquisitions or joint venture opportunities. Looking out over the next few years, Emerson should find plenty of new expansion opportunities on its own.

The economy represents the biggest question mark. Industrial services, as you’d expect, is a cyclical business. A downturn in the economy will clip profits from time to time. And with over half of sales coming from the energy sector, Emerson has particular exposure to a slowdown in the oil patch.

That’s not a good enough reason to dismiss Emerson outright. With an entrenched market position, light debt load, and modest payout ratio, the company has positioned itself well for any recession. Still, it’s a risk worth considering.

Emerson is a classic example of a boring, low-key company quietly making their shareholders a fortune. This stock doesn’t make for the best banter at cocktail parties. But if you’re willing to trade exciting conversations for on-going dividend income, you’ll like this stock just fine.