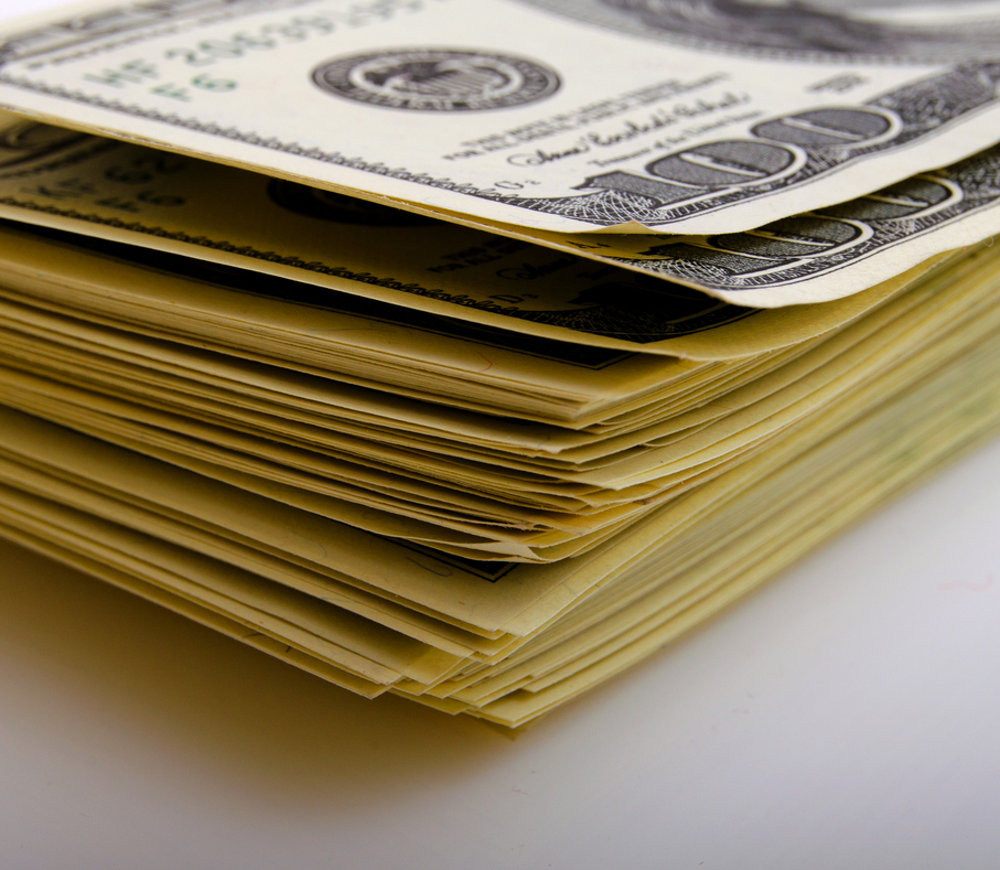 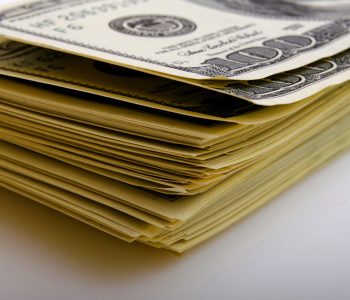 When it comes to picking stocks for retirement investors, the key is to find companies that can generate a steady–and hopefully increasing–stream of dividends. One of the industries that has produced a lot of solid dividend payers is banking. For decades, dividend-paying bank stocks have played a crucial role helping income investors achieve their goals. In this article, we are going to take a look at the best financial stocks for retirement.

Due to what happened in the financial crisis of 2008, financial stocks may not be the first ones that come to mind when investors are looking for the best long-term retirement stocks. The thing is, though, while some banks disappointed investors, others managed to survive and thrive. Investors who held on to their shares of solid bank stocks have been handsomely rewarded since the U.S. economy started to recover. Take a look at how much the Dow Jones U.S. Banks Index has gone up in the last five years and you’ll see what I mean: 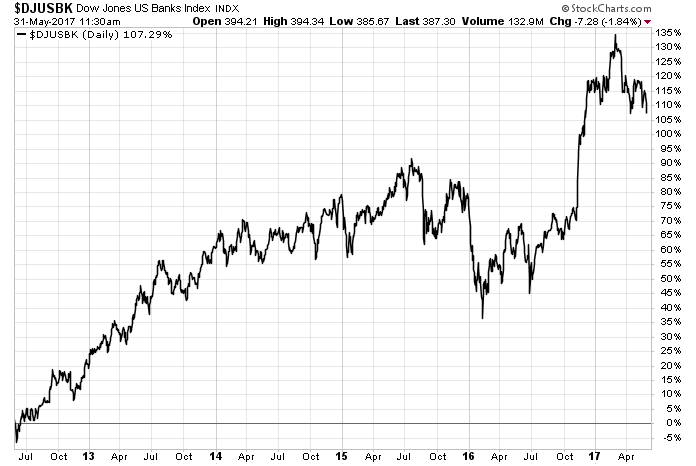 The reason why bank stocks deserve attention today is that financial institutions still provide a service that’s essential to the well-being of our economy. When a consumer wants to buy a house, they usually get a mortgage from a bank; when businesses want to expand their operations, they go to banks to get financing. Many financial institutions also provide insurance and investment products. In other words, bank stocks are backed by services that are essential and recurring.

Furthermore, bank stocks benefit from the high barriers to entry of the financial services industry. Think about it; in this day and age, it takes an enormous amount of capital to start a bank. There are also many regulatory hurdles to jump through. And even if you managed to start a bank, acquiring customers who are already with other banks would be extremely costly. That’s why many financial institutions have been around for decades (and sometimes over a century) and are still churning out decent profits. Meanwhile, investors of these bank stocks have been collecting sizable dividends year after year.

For investors searching for the “best bank stocks to invest in,” Wells Fargo & Co (NYSE:WFC) should be near the top of their list. The company has been around for 165 years. With $2.0 trillion in assets, it is currently the third-largest bank in the country.

Wells Fargo is the perfect example of a company with an established position in an industry with high barriers to entry. The bank has more than 8,500 branches, 13,000 ATMs, and offices in 42 countries and territories. If someone wants to challenge Wells Fargo’s position, they would have to build an equally impressive branch network. Moreover, Wells Fargo is currently serving one-in-three households in America. Convincing those customers to switch would be a very difficult task, indeed.

Wells Fargo’s economic moat is so impressive that it has become a favorite stock of legendary investor Warren Buffett. According to Buffett’s Berkshire Hathaway Inc.’s (NYSE:BRK.B) latest 13-F filing, the billionaire investor owned 479.7-million shares of WFC stock by the end of the first quarter, worth a whopping $24.5 billion at today’s price. (Source: “Form 13F Information Table,” United States Securities and Exchange Commission, last accessed May 31, 2017.)

Despite being well over a century old, Wells Fargo is still growing its business. According to the company’s most recent quarterly earnings report, total average deposits increased seven percent year-over-year to $1.3 trillion and total average loans grew four percent year-over-year to $963.6 billion. For a company whose biggest source of revenue is net interest income, having a growing portfolio of loans and deposits is certainly good news. (Source: “Wells Fargo Reports $5.5 Billion In Quarterly Net Income,” Wells Fargo & Co, April 13, 2017.)

JPMorgan Chase & Co. (NYSE:JPM) is one of the oldest financial institutions in the U.S., with a history that can be traced back to 1799. Over the past two hundred years, it has established itself as a leader in investment banking, consumer banking, commercial banking, financial transaction processing, and asset management. Right now, it is the largest bank in the country, with assets of $2.5 trillion.

JPMorgan pays quarterly dividends of $0.50 per share. At today’s price, that translates to an annual yield of 2.44%. While the yield figure may not seem that impressive compared to its peers, JPM stock stands out when it comes to dividend growth. In 2011, the company paid total dividends of $0.80 per share. In 2016, the figure has grown to $1.84 per share. That’s a 130% increase in JPMorgan’s annual payout in just five years! (Source: “Dividend History,” JPMorgan Chase & Co., last accessed May 31, 2017.)

The bottom line improved as well. The company generated earnings of $1.65 per share for the quarter, up 22% from the $1.35 per share earned in the year-ago period. Note that the $0.50 of dividend paid in the first quarter represented just over 30% of the company’s earnings per share. With a growing business, this bank stock could reward investors with more dividend hikes in the future.

U.S. Bancorp (NYSE:USB) does not make headlines very often, but it is still a solid bank stock that income investors should not ignore.

Headquartered in Minneapolis, Minnesota, U.S. Bancorp is the parent company of U.S. Bank National Association, the fifth largest commercial bank in the U.S. with $446.0 billion in assets. Through its 3,106 branches in 25 states, the bank provides a variety of services, including banking, investment, mortgage, trust, and payment processing.

U.S. Bancorp is not as big as the previous two bank stocks, but the company still does a great job at diversifying. It generates a balanced mix of revenue from Consumer and Small Business Banking (40%), Payment Services (31%), Wholesale Banking (17%), and Wealth Management and Securities Services (12%).

Toronto-Dominion Bank (NYSE:TD) is a multinational banking and financial services corporation headquartered in Toronto, Ontario, Canada. The company has a sizable presence in both Canada and the U.S., with 2,413 banking locations.

The first thing to note about TD Bank is that it has a strong retail focus. The bank operates through four segments: Canadian Retail, U.S. Retail, Wholesale, and TD Ameritrade. In 2016, Canadian and U.S. Retail accounted for 87% of the company’s total earnings. (Source: “Investor Presentation,” Toronto-Dominion Bank, last accessed May 31, 2017.)

Retail banking has proven to be a less volatile business than wholesale banking. Having a retail focus adds stability to TD’s revenue and income stream.

Another thing to note about this foreign bank is that in most provinces of Canada, mortgage lenders have the recourse to both borrower and property. This means that in the event that the collateral securing a loan is liquidated but is insufficient to cover the total amount, the lender can go after the borrower or the guarantors personally to cover the deficiency. This is one of the reasons why many Canadian banks were able to survive the last financial crisis in much better shape than their American counterparts.

In TD’s case, the bank not only survived the last recession, but was actually raising its dividends during that period. Right now, TD stock is yielding a handsome 3.73%. I consider it to be one of the best bank stocks for a retirement portfolio.

The last one on this list may come as a bit of a surprise: Greenhill & Co., Inc. (NYSE:GHL).

As a consumer, chances are you have never heard of Greenhill. Well, it is an independent investment bank that focuses on providing advisory services on mergers, acquisitions, restructuring, financing, and capital raising. Unlike the “bulge-bracket” firms, Greenhill has no trading, investing, lending, or underwriting business.

Investment banking is not really an industry known for producing the best dividend stocks for retirement income. But you may want to make an exception for Greenhill.

You see, despite being a smallish company, Greenhill manages to run a diversified business. The company has offices on five continents, and 50% of its historical revenue come from outside of the U.S. Industry-wise, the company has eight sectors that each brings in at least eight percent of its total deal count. (Source: “Greenhill 2016: Sector-Leading Growth and Profitability,” Greenhill & Co., Inc., last accessed May 31, 2017.)

Among the bank stocks trading in the U.S. stock market, Greenhill stands out when it comes to dividends. The company pays $0.45 per share each quarter, translating to an incredible annual yield of 8.89%.

Greenhill is also generating more than enough cash to cover its dividend payments. Last year, it paid out just 58% of its total cash flow. The company’s average dividend payout ratio since 2008 is at a modest 62%.

The last thing to note about bank stocks is the current interest rate environment. The U.S. Federal Reserve has kept its benchmark interest rate artificially low for the most part since the last financial crisis. But now, interest rates are rising.

Don’t forget that investing in individual bank stocks is just one of the ways to tap into the financial services industry. For further reading, income investors may also want to check out our column on financial ETFs.