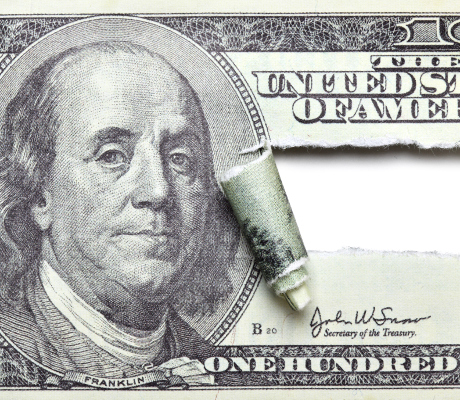 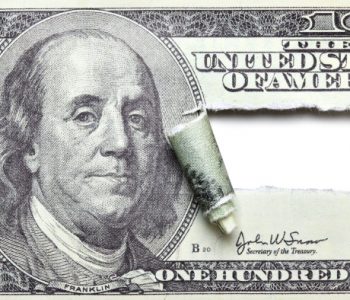 Disney Stock is a Long-Term Winner

Patience can be a virtue, especially in income investing. If you invested in Walt Disney Co (NYSE:DIS) stock a few decades ago and held onto the shares until this day, you would have made huge returns on your investment. Due to the tremendous growth in Disney’s stock price, the company has split its shares on several different occasions. In this article, we are going to take a look at the Disney stock split history, its current performance, and what the future could hold for the media giant.

At Income Investors, we love stocks that can provide investors with consistent returns over the long term. In the stock market, there are quite a few names that have already achieved that. Procter & Gamble Co (NYSE:PG), Johnson & Johnson (NYSE:JNJ), and 3M Co (NYSE:MMM) are good examples of this.

Disney doesn’t really have the same reputation as the aforementioned companies. And this shouldn’t come as a surprise, given that Disney started out as a studio making animation. This business could be hugely profitable, but is not known to have the same stability and durability as, say, a business that’s making toothpaste and toilet paper. Therefore, despite the company’s leading position in the American animation industry, not everyone considered Disney stock as a long-term pick.

However, as time went by, Disney stock started to prove its value. As you can see from the chart below, Disney stock climbed from a split and dividend-adjusted $0.21 per share to $114.44 over the past 50 years. That’s a return of 54,495%!

In other words, if investors bought $10,000 worth of Disney stock back in 1967 and reinvested all the dividends, their stake would be worth more than $5.4 million today. 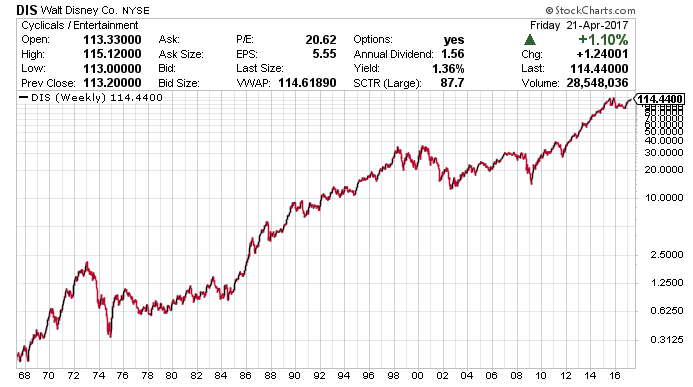 Due to the massive increase in Disney’s share price, the company has split its shares multiple times. The following table shows the date, type, and share price during each of Disney’s stock splits.

One thing to note about the information in the table above is that Disney’s first stock split actually happened before it became a public company. Disney stock completed its initial public offering (IPO) in 1957 at a price of $13.88 per share. But you may be wondering: how could Disney split its shares before its IPO?

Well, although Disney’s common shares began trading on the New York Stock Exchange (NYSE) in 1957, its preferred shares were trading over the counter (OTC) long before that. Disney’s first issue was 155,000 shares of six percent cumulative convertible preferred stock in the OTC market. Moreover, Disney’s common shares have also traded OTC prior to the company’s IPO. That’s why it was able to conduct a stock split before its listing on the NYSE. 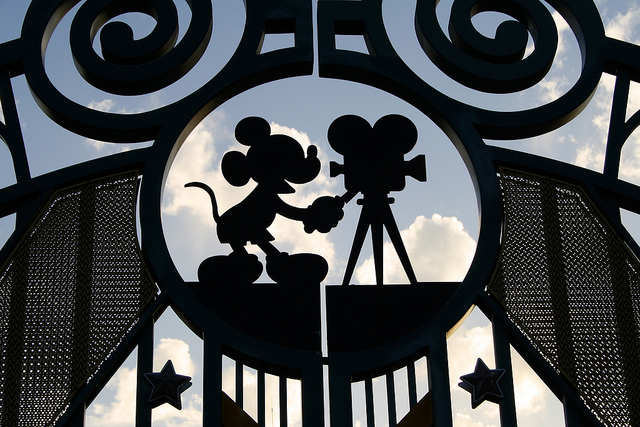 What’s the Effect of a Stock Split?

A stock split increases the number of a company’s outstanding shares by issuing more shares to existing shareholders. For instance, if a company—let’s call it Company A—has 10 million shares outstanding, a two-for-one stock split would give existing shareholders an additional share for each one they already own. The result is a 100% increase to the company’s number of outstanding shares, to a total of 20 million shares.

The action of a two-for-one stock split alone does not change Company A’s fundamentals, and its market capitalization stays the same. However, because the number of shares outstanding has doubled, the price of each share of Company A will be halved.

Why Do Companies Split Shares?

So, Company A’s two-for-one stock split doubled its number of shares outstanding and halved its share price. Since there’s no change to the fundamentals, why would Company A do it?

Well, the answer lies in the stock price. Imagine that Company A just had a huge rally. Because its stock just shot through the roof, Company A’s share price is much higher than its competitors. We know that valuation metrics such as the price-to-earnings multiple involve more than just stock price alone. But Company A’s significantly higher share price, compared to its peers, could make the stock look expensive.

Moreover, when there is a minimum trading lot, a high stock price could deter small investors from investing in the company. That’s why, when a company’s stock price rises above a certain level, it may want to conduct a stock split.

Over the past few decades, Disney stock has surged tremendously. There were periods of stagnation and even decline, but the trend has been upward for the most part. Due to the massive increase in the Disney stock price, the company has split its shares six times since the IPO. Each time before the split, Disney stock was trading at over $100.00 apiece, including one time when it was trading at $214.50.

While stock splits are a common practice among companies after huge rallies, there are exceptions. The most famous one is perhaps Warren Buffett’s Berkshire Hathaway Inc. (NYSE:BRK.A). Berkshire’s “Class A” shares have never split, and are now trading at a whopping $245,910.00 apiece. Still, the company created a new class of stock—the “Class B” shares in 1996—to make investing in Berkshire more feasible for small investors. Those Class B shares have been split before and are now trading at a very accessible $163.88 apiece.

However, there are other factors to consider when it comes to the next Disney stock split. Disney stock already reached over $120.00 a share in November 2015. But then it had a major correction, dropping to less than $90.00 a share, and it traded at subdued levels for the most part of 2016. In recent months, Disney stock has started climbing up. The 52-week range of Disney shares is $90.32 to $115.12.

One of the reasons behind Disney stock’s downturn was the performance in the company’s “Media Networks” segment. You see, while Disney has been putting out blockbuster films one after another, the company’s business is much more than just making movies. As a matter of fact, Disney’s Media Networks segment—which includes networks like ABC, ESPN, and the Disney Channel, among other businesses—is currently the company’s biggest segment. In Disney’s most recent fiscal year, the segment was responsible for generating more than 40% of the company’s total revenue. (Source: “The Walt Disney Company Reports Fourth Quarter And Full Year Earnings For Fiscal 2016,” Walt Disney Co, November 10, 2016.) 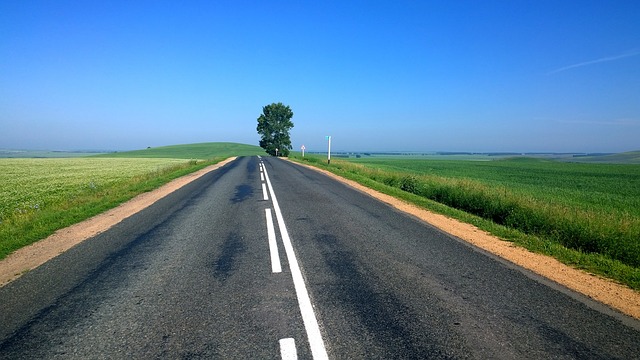 The thing is, though, cable networks are far from an investor favorite these days. The concern comes from the fast growth in the on-demand video streaming industry.  Just take a look at the subscriber growth (and stock price growth) of Netflix, Inc. (NASDAQ:NFLX) and you’ll see what I mean.

If consumers decide to move from cable TV to on-demand video streaming, then traditional TV networks could see their business decline. In fact, one of the main reasons behind Disney stock’s downturn was cord-cutting in its ESPN network. I don’t think this is going to be the end of the world for Disney, as the ESPN brand is still strong and its content could be distributed through other platforms. However, as we have seen over the last a year-and-a-half, the concern could affect investors’ views on Disney stock. Therefore, while Disney stock is trading at above $100.00 apiece, management could wait until the share price further stabilizes, and then hopefully address some of the cord-cutting concerns before conducting another stock split.

If you have read my Disney stock in 2017 article, you would know my take on the whole cord-cutting concern. Media Networks is a huge segment of Disney, but the company does have other revenue sources. For instance, Studio Entertainment has kept delivering huge box office success, and “Parks and Resorts” just grew its revenue by six percent year-over-year and operating income by 13% in the most recent quarter. (Source: “The Walt Disney Company Reports First Quarter Earnings For Fiscal 2017,” Walt Disney Co, February 7, 2017.)

What Disney has done is go from a few animated films to a huge media and entertainment empire that has the ability to generate recurring revenue and profits. The company has an unrivaled brand name and, thanks to the acquisitions of Marvel Entertainment and Lucasfilm, its presence has gotten even stronger.

And this brings me to my final point: for income investors, when Disney stock is going to have another split really doesn’t matter all that much. Instead, the focus should be on the Disney stock dividend. Like I said, the company has built a recurring business model and, in its fiscal 2016, it has a payout ratio of just 24.8%. While Disney stock may not have the same status as the best dividend stocks, it should have no problem keep rewarding income investors.