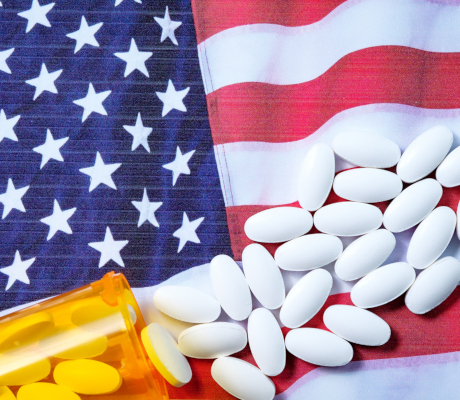 New Device Could Solve the Opioid Crisis and Pay Dividends 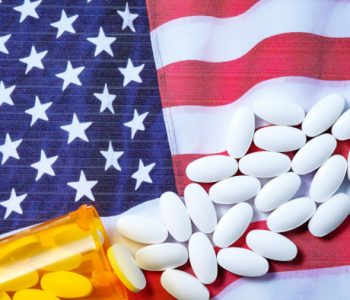 Investing in the War on Opioids

Opioids kill hundreds of Americans each day. I probably don’t need to remind you; you can see the signs of a crisis in many areas of the U.S., including overstretched emergency rooms and addicts shooting up in public.

In 2016, a photo went viral of a couple who overdosed in a car with their child sitting in the back seat. (Source: “The Story Behind the Viral Photo of an Opioid Overdose,” Time, January 24, 2017.)

Think I’m exaggerating? The National Institute on Drug Abuse estimates that more than 72,000 Americans died from drug overdoses in 2017, up from less than 20,000 in 1999. To put that figure in context, about 58,000 U.S. soldiers were killed during the entire Vietnam War. (Source: “Overdose Death Rates,” National Institute on Drug Abuse, last accessed January 2, 2019.)

The surge in overdose deaths has brought down the average life expectancy in the U.S. for the past three years. That plunge constitutes the longest sustained decline in expected lifespan since the 1915–1918 period, when World War I and the Spanish flu pandemic killed hundreds of thousands of Americans. (Source: “U.S. life expectancy drop continues worst trend in 100 years — pinned in part on drug overdoses, suicides,” MarketWatch, November 29, 2018.)

But we may have reached the high-water mark in this crisis. Dividend champion Medtronic plc (NYSE:MDT) has poured millions of dollars into researching pain therapy. Its solution won’t entirely solve the opioid crisis, but it could put a big dent in the problem. And shareholders betting on this firm could make a small fortune in the process.

Americans have become some of the leading consumers of opioid painkillers in the world. In the 1990s, pharmaceutical companies pressured doctors to prescribe new drugs, which they claimed could relieve pain with minimal risk of addiction.

Over the following decades, opioids became the treatment of choice for a variety of conditions, such as arthritis, back pain, and other injuries. Doctors even prescribed opioids for minor ailments like headaches and muscle sprains.

As a result, opioid consumption in the United States has skyrocketed, sparking a wave of addiction and overdoses across the country.

Medtronic’s solution? Spinal-cord stimulators. Doctors surgically insert the device, which is about the size of a keychain ring, under the skin near the patient’s lower back. Like opioids, stimulators mask pain.

The similarities, however, end there. Rather than change the chemistry of the brain, stimulators use electrical currents to block nerve signals. That grants patients effective relief without the risk of addiction.

Analysts think this could just be the beginning. With doctors under fire for writing opioid prescriptions, new pain-control devices could provide a real alternative to narcotics. Investment research firm Canaccord Genuity Group Inc (OTCMKTS:CCORF, TSE:CF) estimates that the market could grow to $20.0 billion in annual sales over the next few years. (Source: Ibid.)

Where management can’t build their own products, they haven’t shied away from buying companies that can. At the end of 2014, Medtronic purchased rival device maker Covidien plc to build out its product portfolio. More recently, the company purchased Mazor Robotics Ltd. for $1.7 billion, instantly giving it a position in the fast-growing market for robot-assisted surgeries.

Thanks to an aging population, Medtronic stands on the front line of an industry boom. Each day, 10,000 baby boomers in America turn 65. The Population Reference Bureau estimates that the number of seniors in this country will more than double by 2060. (Source: “Fact Sheet: Aging in the United States,” The Population Reference Bureau, January 13, 2016.)

That means more prescriptions, more doctor visits, and, of course, more medical devices. Medtronic has seen sales grow by nearly 50% over the past four years, with revenue poised to continue growing at a high single-digit clip for the foreseeable future. (Source: “Medtronic’s total revenue from 2006 to 2018 (in million U.S. dollars),” Statista, last accessed January 2, 2019.)

Want to know the best part? Thanks to high switching costs, Medtronic earns some of the highest margins in the medical supply industry. Changing to a rival product requires a large upfront investment, never mind the cost of actually training practitioners on how to use a new brand of equipment.

As a result, Medtronic can pass on price hikes to customers year after year. In fiscal-year 2018, the company earned almost $0.70 in gross margin on every dollar of revenue. (Source: Medtronic plc, June 22, 2018, op cit.)

Those numbers are comparable to some of the best dividend stocks in the world, like Johnson & Johnson (NYSE:JNJ), McDonald’s Corp (NYSE:MCD), and The Coca-Cola Co (NYSE:KO).

But it gets better. In addition to generating outrageous profits, Medtronic also kicks back a lot of money to shareholders. Management has committed to pay out at least 50% of the company’s free cash flow to investors through dividends and share repurchases. (Source: Ibid.)

That policy has allowed the company to raise its distribution for 40 consecutive years, earning the stock a position on the elite list of Dividend Aristocrats. Over the past decade, executives have boosted the payout at an 11% compounded annual clip. 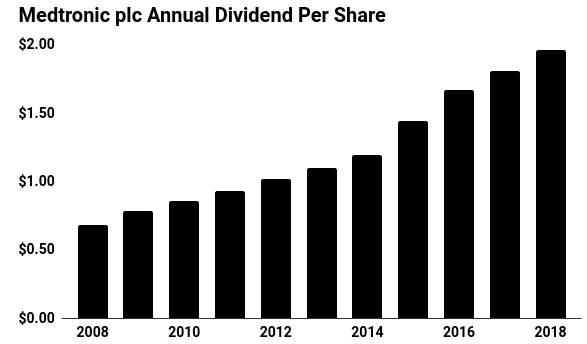 I suspect that this payout will continue to grow. Spinal-cord stimulators represent one of the company’s largest opportunities.

Wall Street analysts project that Medtronic’s earnings per share—and by rough extension, its dividend—will grow over the next five years. That growth could be even larger if some of the company’s experimental devices get the green light from the Food and Drug Administration (FDA). (Source: Yahoo! Finance, op cit.)

While Medtronic is the largest player in the medical device space, new competitors pop up from time to time—from less-sophisticated discount products to high-end technological advancements. Such smaller upstarts always threaten to nibble away at the company’s market share.

That said, we have seen no new entrants manage to take a bite out of Medtronic’s profits. The company enjoys an entrenched market position, given that inertia and up-front training costs prevent most practitioners from switching to competitors’ products.

Medtronic’s large sales team has built up deep relationships with doctors over decades. Small upstarts would have a tough time replicating this distribution network overnight.

We may have reached the peak of America’s opioid crisis. Thanks to thousands of scientists working on this problem, we can see solutions on the horizon.

Medtronic isn’t the only company working on the issue, but it has carved out an impressive leadership position. That could result in impressive capital gains (not to mention dividends) for early investors.