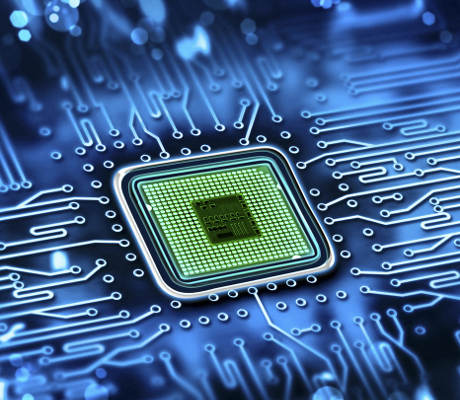 AVGO Stock: Why Broadcom Inc Is a Top Pick for Income Investors 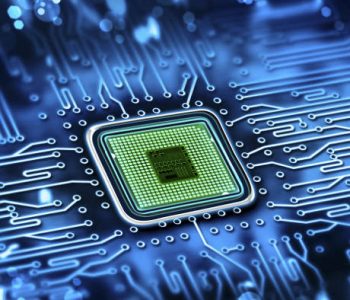 Today’s chart highlights one of the most overlooked dividend stocks in the current market: Broadcom Inc (NASDAQ:AVGO).

Broadcom is a semiconductor company. It supplies a wide range of products through four operating segments: “Wired Infrastructure,” “Wireless Communications,” “Enterprise Storage,” and “Industrial & Others.”

To most investors, Broadcom is considered a growth stock. The company has been growing its business at quite an impressive pace, and the merger between Broadcom Inc and Avago Technologies in 2016 only added fuel to the fire.

Thanks to solid financial performance, investors are willing to reward Broadcom with a higher share price. Over the past five years, AVGO stock has surged by more than 500%.

Whenever a stock skyrockets like that, dividends don’t seem to be that important. However, I should point out that the growth in Broadcom stock’s dividend was actually more impressive than its soaring share price.

Well, the company (back then it was the pre-merger Avago Technologies) adopted a dividend policy in 2010. Its initial quarterly dividend rate was $0.07 per share.

Since then, the amount has only been increasing. With Broadcom’s current quarterly dividend rate standing at $1.75 per share, the company’s payout has grown by a staggering 2,400%. No misprint. (Source: “Broadcom Inc. Dividend Date & History,” Nasdaq, last accessed July 4, 2018.)

The chart below shows AVGO stock’s dividend history for the past five years. 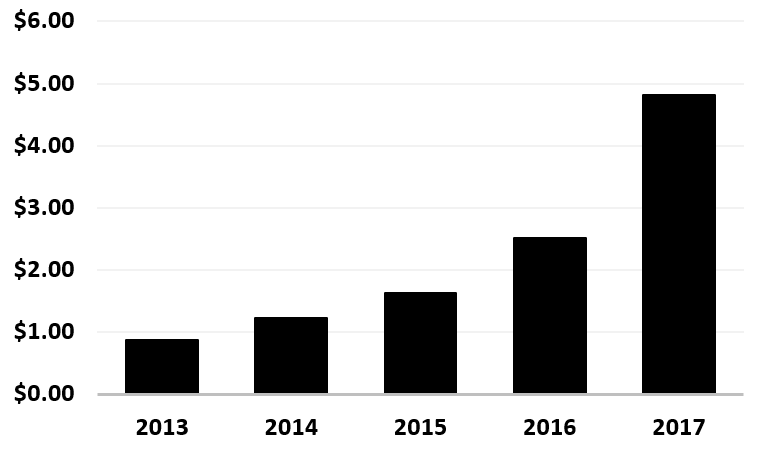 And if you are wondering whether those dividend hikes were too aggressive, don’t worry. Despite those oversized payout increases, the company has no problem meeting its dividend obligations.

In Broadcom’s fiscal-year 2017, which ended October 29, 2017, the company generated adjusted earnings of $16.02 per share. Considering that it paid total dividends of $4.08 per share for the year, Broadcom achieved a payout ratio of 25.5%, leaving a wide margin of safety. (Source: “Broadcom Limited Announces Fourth Quarter and Fiscal Year 2017 Financial Results and Interim Dividend,” Broadcom Inc, December 6, 2017.)

In the first half of the company’s fiscal-year 2018, Broadcom’s adjusted earnings came in at $10.00 per share. Although management raised its quarterly dividend rate to $1.75 per share, Broadcom’s adjusted net income of $10.00 per share easily covered its total dividend payment of $3.50 per share in the first half of the fiscal year. (Source: “Broadcom Inc. Announces Second Quarter Fiscal Year 2018 Financial Results and Quarterly Dividend,” Broadcom Inc, June 7, 2018.)

Other than raising its dividend at an astonishing pace, Broadcom returns cash to investors through stock buybacks. When a company repurchases its shares, investors don’t get a check directly. But by reducing the number of shares outstanding, the action allows each existing shareholder to own a slightly larger portion of the company.

On April 12, 2018, Broadcom’s board of directors announced a new share repurchase program. Under the program, the company will be allowed to buy back up to $12.0 billion of its own stock until the end of its fiscal-year 2019. (Source: “Broadcom Announces $12 Billion Share Repurchase Authorization,” Broadcom Inc, April 12, 2018.)

“We are maintaining our policy of delivering 50% of trailing 12-month free cash flow to shareholders in the form of dividends while adding the ability to use the balance of our free cash flow not only for acquisitions but also for opportunistic buybacks,” said Broadcom’s Chief Financial Officer Tom Krause in the buyback announcement. (Source: Ibid.)

Bottom line: Broadcom Inc hasn’t been paying dividends for as long as most other dividend giants. However, with its rock-solid business and management’s willingness to return cash to shareholders, AVGO stock deserves to be a top pick for dividend investors.