We don’t have all the info yet.

For the most part, insiders have stayed tight-lipped. The only details come from a short memo and a “leaked” White House photo.

But our research shows that President Donald Trump has prepared something big. This trigger event might see $2.6 trillion change hands as early as Christmas. And for those who get in now, it could mean cash payouts as high as 12%, 17%, or even 25%.

A few weeks ago, a White House visitor posted a photo on Twitter. At first glance, nothing seemed out of place. It just looked like a picture of a guest with top-ranking adviser Steve Bannon.

The background, though, revealed something interesting. Written on the whiteboard includes four columns beneath the campaign theme: “Make America Great Again.” The list includes President Trump’s policy goals and achievements so far.

One section has me really excited. It’s tough to read, but check out the bullet I’ve circled in red. Underneath the column “Pledges on Tax Reform,” Trump has proposed a one-time levy on corporate cash held overseas. 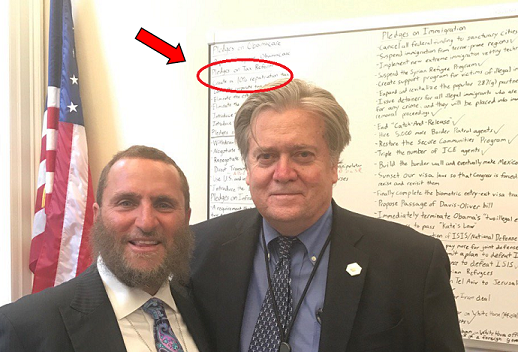 While the details remain fuzzy, the move could save U.S. firms billions of dollars in taxes.

Trump, however, could change that.

Based on rumors out of Washington, the White House wants to introduce a one-time 10% levy on overseas cash holdings. The plan would slash the tax rate that corporations currently pay by two-thirds and save businesses hundreds of billions of dollars.

Such a move would also spark an avalanche of cash stateside. By lowering the tax rate, corporations would likely return most of their overseas cash piles. That would provide a real shot in the arm for the U.S. economy and allow firms to catch up in critical areas like research and development.

In fact, a study by the American Action Forum (AAF) showed that a one-time tax holiday would create up to 3.5 million jobs. They estimate that the measure would add up to $440.0 billion to the U.S. economy, providing funds that are desperately needed for a real recovery. (Source: “Ending the Lockout of Overseas Earnings: An Update,” American Action Forum, August 7, 2013.)

Finally, any tax cut could spark a dividend boom.

Corporations would likely use their newfound windfall to fund buybacks and dividend hikes and pay down debt. We’d also see a wave of special distributions, with one-time payouts as high as 10%, 15%, or even 25% in some cases.

Take Apple Inc. (NASDAQ:AAPL), for example. Last quarter, the tech giant held $250.0 billion in cash overseas. If the company paid out all of these reserves at once, management could issue a one-time special dividend of more than 22.5%.

And Apple is hardly the only one. Big names like Pfizer Inc. (NYSE:PFE), Merck & Co., Inc. (NYSE:MRK), and International Business Machines Corp. (NYSE:IBM) all have billions of dollars stashed abroad. Executives will likely respond to any tax bill with dividend hikes and stock buybacks. Those building stakes now could lock in tidy yields.

Of course, you can’t call Trump’s tax plan a slam dunk yet.

The failure to repeal “Obamacare” shows that the president doesn’t have a good grasp of D.C. politics. Tough talks in Washington will reshape any proposal.

That said, I think Trump can get a bill through. Republicans had divided motivations on healthcare, but they present a pretty united front on taxes: the lower, the better. If the president can get the bill passed, it would represent an income bonanza for retirees.