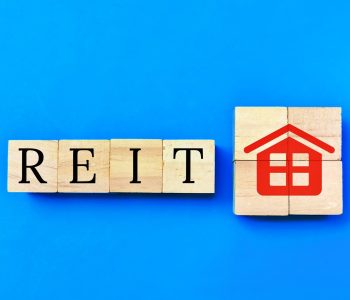 Many income investors want to find stocks with ultra-high dividends. With inflation at a 40-year high, who doesn’t? But there’s something to be said for a bullish stock with smaller, more reliable dividends. And that’s exactly what American Campus Communities, Inc. (NYSE:ACC) is.

As of this writing, ACC stock’s dividend is 3.4%. That might not be enough to turn the heads of some dividend hogs, but American Campus Communities stock’s price is also on fire—which is more than you can say for many high-yield dividend stocks.

While student housing might not be as scintillating as Manhattan real estate, American Campus Communities, Inc. has a captive market. And with student housing strategically located next to universities, its property value often rises quickly.

What makes the company’s properties so compelling, aside from being state-of-the-art, is their locations. That, really, is at the heart of any real estate investment trust (REIT). American Campus Communities, Inc. focuses on properties located just one-tenth of a mile from campus.

And not just any campus will do. The company develops and owns on-campus and pedestrian-to-campus properties serving Power 5 conference and Carnegie R1 institutions (doctoral universities with high amounts of research activity).

Since then, American Campus Communities has completed the first six phases of the project, which is located just outside Walt Disney World in Florida. The remaining four phases are expected to be finished by the end of 2023.

American Campus Communities, Inc. expects Flamingo Crossings Village to achieve an average occupancy of approximately 93% in 2022. The company also expects the project to meet its 2022 targeted yield with full stabilization at the 6.8% level in May 2023.

All universities that American Campus Communities, Inc. serves have reinstituted housing policies and on-campus requirements since fall 2021. This has helped the student housing sector restabilize, surpassing its pre-pandemic occupancy levels.

In 2021, the company outperformed the entire student housing sector in revenue growth by 300 basis points. The REIT did that by achieving a 95.8% fall occupancy rate and a 3.8% average growth rate. American Campus Communities, Inc. also grew its same-store rental rate for the 17th consecutive year and returned its same-store net operating income (NOI) to pre-pandemic levels—one full year earlier than anticipated.

And the company expects those occupancy gains to continue this fall. Thanks to its long-term strategy and the accelerating momentum of its business, the REIT expects to achieve earnings-per-share growth in the range of 12% to 16% in 2022. American Campus Communities expects that, in 2023, the Disney property will reach $42.0 million in run-rate NOI, net of ground rent in May.

For 2021 to 2023, American Campus Communities’ funds from operations (FFO) are projected to expand at a compound annual growth rate (CAGR) of 10.7%. The average FFO CAGR is 8.4%. The REIT’s FFO growth trumps the industrial, apartment, manufactured housing, triple net, data center, mall, shopping center, health-care, and office sectors. The only retail real estate sectors that are stronger are self-storage and single-family rental.

During the fourth quarter of 2021, American Campus Communities, Inc. commenced three third-party on-campus development projects at Drexel University, Princeton University, and the University of California, Irvine. Subsequent to the quarter-end, the REIT began a third-party development project at the Massachusetts Institute of Technology (MIT). The four projects are expected to contribute fees of approximately $23.4 million during the associated construction periods.

As mentioned earlier, the company completed six phases of the 10-phase Flamingo Crossings Village in 2021. Cumulatively, the company has finished 6,023 beds in the project, representing $369.1 million of development on schedule and within budget.

The company has held its quarterly payout at $0.47 per quarter as it restabilizes its operations from COVID-19. As noted earlier, the pandemic-related headwinds have abated.

American Campus Communities, Inc. has a history of announcing dividend hikes in the second quarter of the year. So, we’ll have to wait until May to see if the company is going to hike its payout this year. 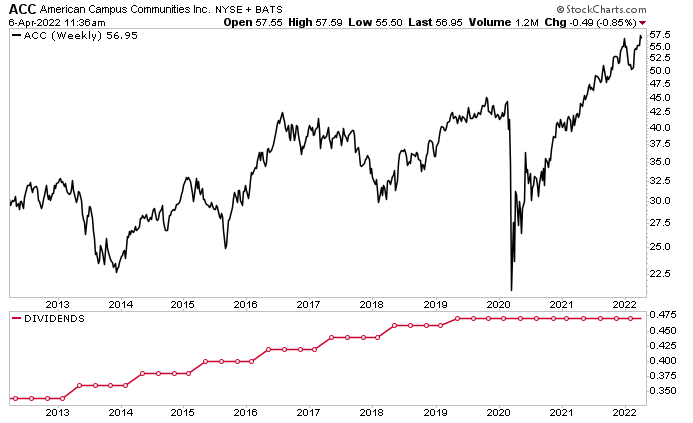 While American Campus Communities stock’s dividend has been held at $0.47 per quarter, its share price has been anything but static. As of this writing, ACC stock is up by:

The biggest owner, manager, and developer of high-quality student housing communities in the U.S., American Campus Communities, Inc. is a financially solid REIT that operates in a recession-resistant industry.

Thanks to strong industry tailwinds, the company’s business is back to its pre-pandemic levels earlier than forecast. The company expects that momentum to continue in 2022, which bodes well for ACC stock investors.