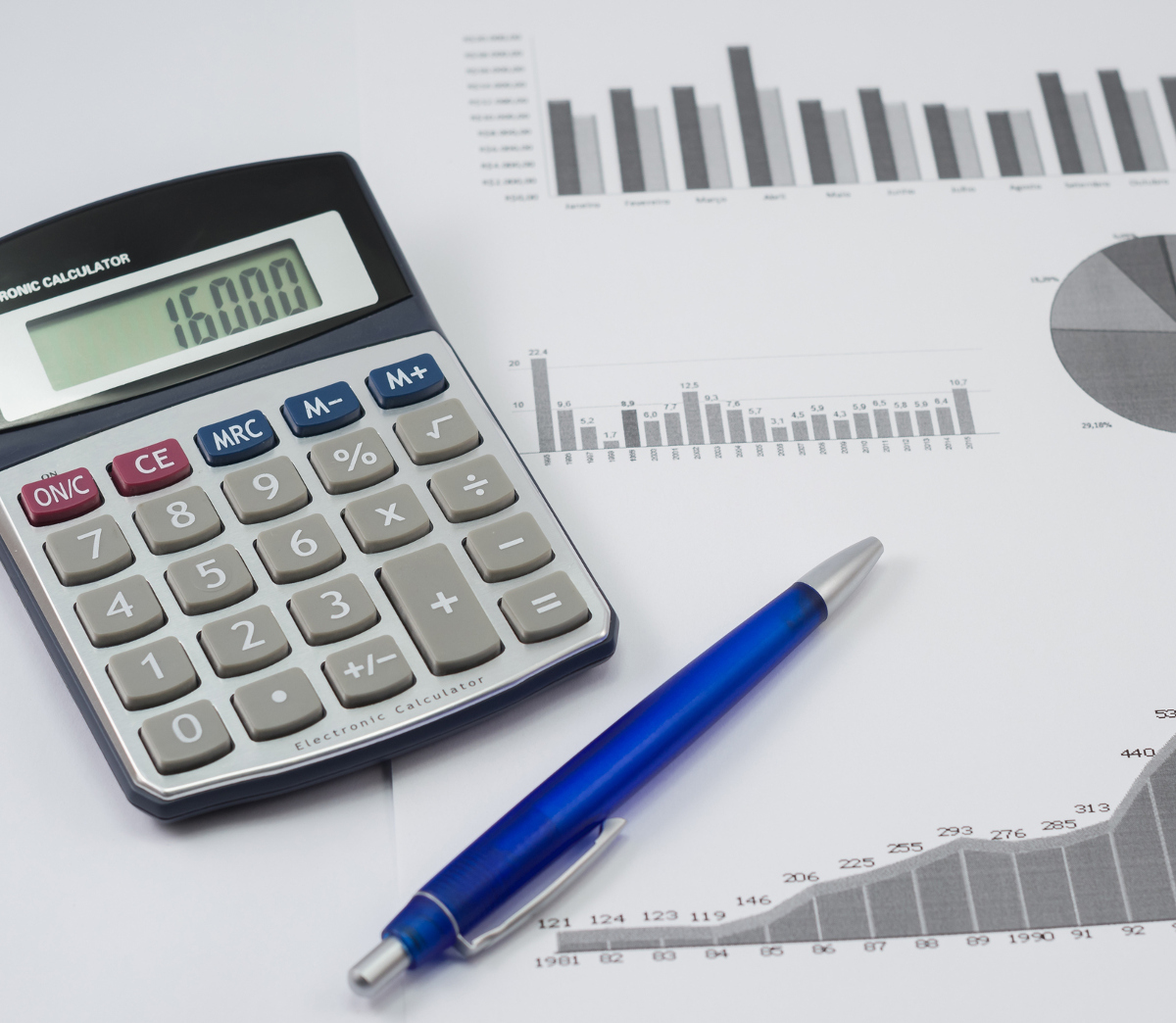 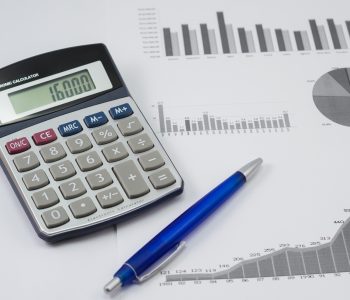 Warren Buffett’s guide to retirement investing is actually quite straightforward. The “Oracle of Omaha” has basically been using the same strategy for decades: buy and hold companies with wide economic moats.

Imagine that a company is making tons of money. What usually happens is that people notice this and want to enter the business too. As competition increases, the incumbent would see its market power decline and would no longer be making the same profits as before.

And because we are talking about retirement investing, dividends will also be a priority. The good news is that Buffett is known for owning shares of solid dividend-paying companies. In fact, nine of the top 10 holdings of Buffett’s Berkshire Hathaway Inc. (NYSE:BRK.B) are dividend stocks. (Source: “Form 13F Information Table,” United States Securities and Exchange Commission, last accessed August 1, 2017.)

Bank stocks can be some of the best retirement investments. Banking is an industry with high barriers to entry, and once you have established your presence, it’s not easy for competitors to take your customers away.

Wells Fargo & Co (NYSE:WFC) is one of the most established players in the business. Founded in 1852, Wells Fargo is currently the third-largest bank in the U.S. with $1.9 trillion in assets. The company provides a wide range of services, including banking, investments, mortgage, insurance, and consumer and commercial finance.

Wells Fargo has a huge presence in the retail banking world. With more than 8,500 banking locations, it has the largest branch network in the U.S. The company also has offices in 42 countries around the world. 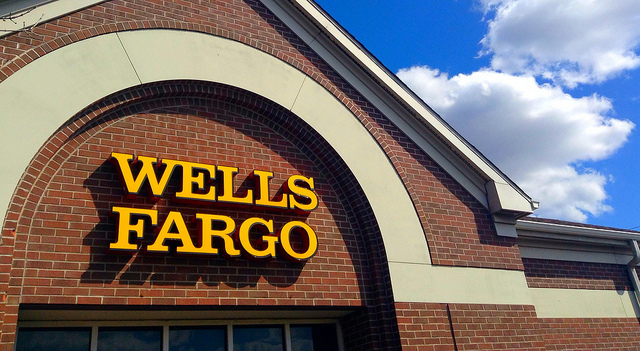 Wells Fargo currently serves one in every three U.S. households. It would be extremely difficult for someone to challenge the company’s established position. That’s why the bank has been around for 165 years and is still making handsome profits.

Buffett likes Wells Fargo a lot. By the end of the first quarter of 2017, his company owned 479.7-million shares of the bank stock. With the stake worth $25.9 billion, Wells Fargo is currently Buffett’s second-largest holding.

The bank pays quarterly dividends, with an annual yield of 2.89%.

If you check Berkshire’s most recent 13F filling, you won’t find Bank of America Corp (NYSE:BAC) among its holdings. However, Buffett did invest in Bank of America’s stock warrants six years ago. And now, he has decided to exercise these warrants.

The warrants allowed Berkshire to acquire 700-million shares of Bank of America stock for approximately $5.0 billion. Given that 700-million shares of BAC stock have a market value north of $17.0 billion right now, Buffett just made a $12.0-billion profit. (Source: “Warren Buffett just made a quick $12 billion on a clever Bank of America investment,” CNBC, June 30, 2017.)

Bank of America is another major player in the U.S. banking industry. The company has 4,500 branches and serves approximately 47-million customers. 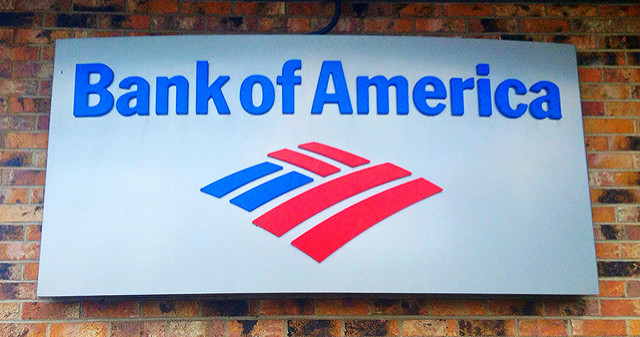 At the current price, Bank of America stock yields 1.96%. In just the last two years, the company’s quarterly dividend rate has more than doubled, from $0.05 per share to $0.12 per share. The bank also maintained a low payout ratio of 26.5%. (Source: “Dividend/Split History,” Bank of America Corp, last accessed August 1, 2017.)

Few companies have served retirement investors better than The Coca-Cola Co (NYSE:KO). With a household brand name and a recession-proof business, Coca-Cola stock has delivered enormous returns to long-term investors.

Just take a look at the company’s stock chart below. If an investor bought Coca-Cola shares back in 1988 and held on to them till today, the return would be an astounding 3,500%. 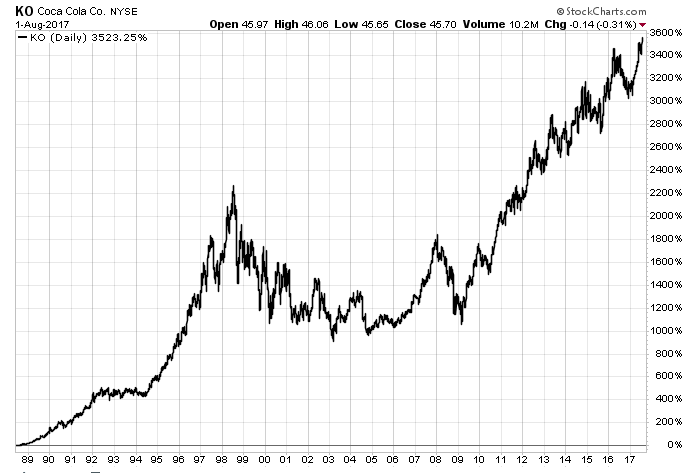 And that’s exactly what Warren Buffett has done. From late 1988 to early 1989, Buffett bought over $1.0 billion worth of KO shares.

Today, Coca-Cola is the fourth-largest holding in Buffett’s portfolio. The 400-million shares owned by Berkshire have a market value of $18.4 billion.

The company makes a great income investment. There are higher-yielding stocks on the market, but Coca-Cola’s 3.24% dividend yield is nothing to sneeze at.

What’s more is that Coca-Cola has been paying uninterrupted quarterly dividends since 1920. It has also raised its per share payout in each of the last 55 years. (Source: “Investors Info: Dividends,” The Coca-Cola Co, last accessed August 1, 2017.)

With people around the world consuming 1.9 billion servings of Coca-Cola’s beverages every single day, the company is set to reward income investors for years to come.

You might wondering why a tech company is on the list of top retirement stocks. With the fast-changing nature of the consumer electronics industry, why should income investors consider a company whose core business is making smartphones?

Well, as it turns out, Apple Inc. (NASDAQ:AAPL) deserves the attention of even the most conservative income investors. The reason is simple: despite being a hardware device maker, Apple has built a huge following, a recurring business, and an ecosystem with endless monetizing opportunities.

Apple’s products tend to be more expensive. Yet every time the company releases a flagship smartphone, Apple fans around world line up outside Apple Stores hoping to be the first ones to get it. Every quarter, even if there is no new product launch, Apple sells tens of millions of units of “iPhones,” bringing in tens of billions of dollars of recurring revenue. (Source: “Apple Inc. Q3 2017 Unaudited Summary Data,” Apple Inc, last accessed August 1, 2017.) 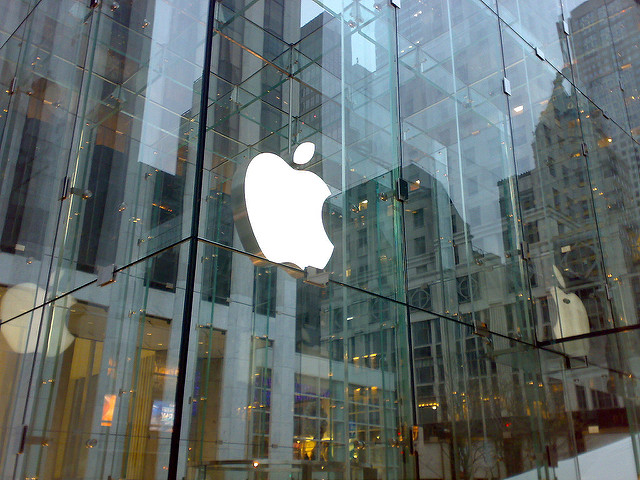 Don’t forget: all Apple devices are running on the company’s proprietary operating systems. With more than one-billion active devices on its ecosystem, Apple also has a growing services segment.

Therefore, it shouldn’t be a surprise that Warren Buffett owns $19.3 billion worth of Apple stock. The smartphone maker has also been growing its dividends. Since Apple resumed paying a dividend in 2012, its quarterly payout has increased 66.4%. (Source: “Dividend History,” Apple Inc, last accessed August 1, 2017.)

Costco Wholesale Corporation (NASDAQ:COST) runs the largest membership-only warehouse club in America. The company has 510 stores in the U.S. and 222 stores internationally.

While physical retailers are not exactly the hottest investments right now, Costco stock is special because it offers a great opportunity to dividend growth investors.

The company started paying a dividend in 2004. Since then, it has raised its quarterly payout by at least 10% every year. Costco’s first quarterly dividend was $0.10 per share. Today, the per-share payout is $0.50. That’s an increase of 400%. (Source: “Splits & Dividends,” Costco Wholesale Corporation, last accessed August 1, 2017.) 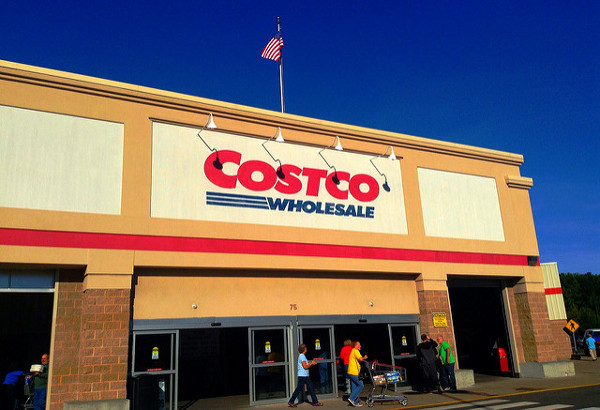 Berkshire owned around 4.3-million shares of Costco by the end of the first quarter, worth approximately $691.0 million.

While Berkshire’s portfolio includes many great retirement stocks, picking individual companies is actually not the most talked about Warren Buffett retirement investment advice.

As a matter of fact, Buffett has long been a proponent of a strategy that looks a lot less exciting that stock-picking: investing in low-cost index funds.

Earlier this year, when asked about how to build a retirement nest egg, Buffett’s answer was to, “consistently buy an S&P 500 low-cost index fund.” (Source: “Warren Buffett says index funds make the best retirement sense ‘practically all the time,’” CNBC, May 14, 2017.)

“I think it’s the thing that makes the most sense practically all of the time,” he added.

According to Buffett, the key to this strategy is consistency. Investors shouldn’t be buying when things are good. Instead, they should keep buying the index fund, “through thick and thin, and especially through thin.”

Buffett explained that for retirement investors, the fees charged by Wall Street money managers can quickly add up. Even a one-percent annual fee can eat into your retirement savings over time.

Does that mean investors should put all their savings in an index fund? Not really. In Berkshire’s 2013 shareholder letter, Buffett wrote that his strategy involves putting 90% of cash in a low-cost S&P 500 Index fund and 10% in short-term government bonds.

The Oracle of Omaha is quite confident about his strategy. He believes that, “the long-term results from this policy will be superior to those attained by most investors—whether pension funds, institutions or individuals—who employ high-fee managers.” (Source: “2013,” Berkshire Hathaway Inc, last accessed August 1, 2017.)